Chinese Name: 天子山 (Tian Zi Shan)
Location:Tianzi Mountain is located in the Wulinyuan Scenic Area in Wulingyuan District, Zhangjiajie City, Hunan Province.
Opening time: 08:00-18:00
Best time for a visit: Spring and fall, especially in April and Octorber.
Ticket:
-Through ticket CNY248 (valid within 2 days, entry to the Tianzi Mountain and Zhangjiajie National Forest Park)
-Cable car: CNY72 for one way and CNY144 for round way. The cable car might be cancelled in bad weather.
How to get there:
-There are shuttle buses from Zhangjiajie Central Bus Station to Sinanyu Ticket Station at the cost of CNY15/person, but normally you have change to a motorcycle in Wulinyuan Town to get there at the cost of CNY3.
-There are free environmental-friendly battery cars in Wulinyuan Scenic Area. 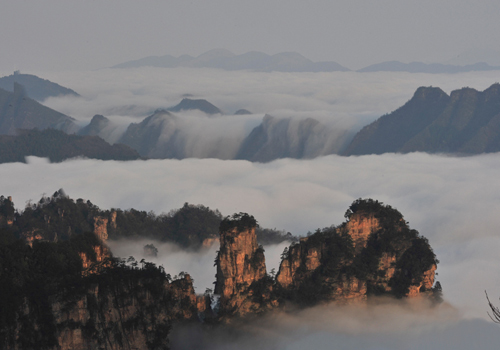 Sea of clouds, sunrise, snow-covered peaks in winter and wavelike rocky peaks are the four most splendid sights of Tianzi Mountain. Major attractions in Tianzi Mountain Nature Reserve include: Shentang Gulf, Imperial Brush Peak, Fairy Offering Flowers, Helong Park and Fields in the Air. All that and more awaits tourists to explore.

Tianzi Mountain is a geological smoking gun that illustrates how fantastic the Earth can be. The range’s formation is surprising: there were once sedimentary rocks growing beneath the waters of an ancient ocean, which ultimately became quartz sandstones. Today, the layer of quartz rocks as old as 380 million years old, as thick as 500 or 600 meters, caps the Tianzi Mountain.

King Xiang and Tianzi Moutain
The Tianzi Mountain was named as ''Qing Yan Mountain'' before Ming Dynasty (1368-1644) for green stones. It was not until the year of 1353 when Xiang Dakun, the leader of Tujia ethnic group, started a revolt, established kindom on Tianzi Mountain, and called himself ''King Xiang'' - son of heaven. In the year of 1385, they encountered the fierce siege of ten thousand soldiers commanded by Emperor Zhu Yuanzhang (1328-1398), the first emperor of Ming Dynasty. Unfortunately, King Xiang died in the battle and fell into the Shentang Gulf. To show their respect and support to Xiang Dakun, people set up villages along the Tianzi Mountain. The mounatin was renamed as ''Tianzi Mountain''. 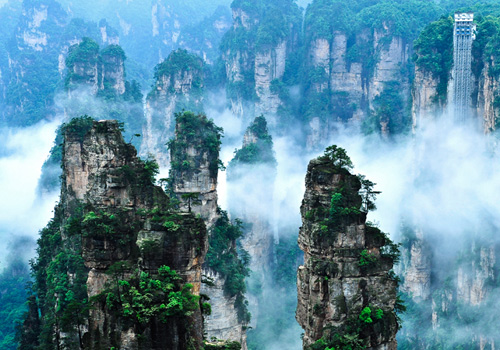 -Shentang Gulf
Shentang Gulf still remains untouched by human footprints, just like a mythical and green labyrinth. A bottomless gorge with bluffs is bathed in misty all the year around. Legend goes that the King Xiang died there. There is only one way leading to the heart of Shentang Gulf - a threatening 9-step natural ladder, which allows only one foot to stand on. In the heart of the basin is a dark pool. You will be horrified by every single glimpse of the bottom. What’s particularly surprising is, sounds of beating drums and gongs, human voice and horses neigh can be heard from the canyon.

-Fields in the Air
Fields in the Air rises 1000 meters above sea level. Beneath it is a chasm with protruding sheer cliffs, above which is a piece of terraced field covering 3 hectares. The field is on three sides surrounded by trees and white clouds, just like a splendid landscape painting. 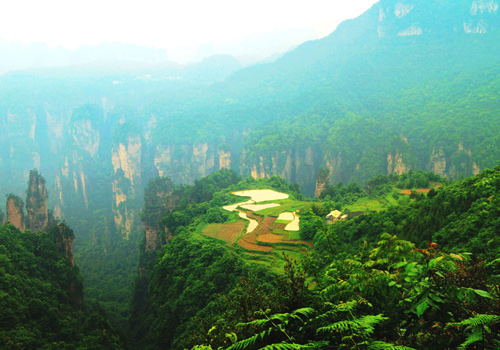 -Stage of Appointing Commander
Rugged rocks juts out of a misty canyon, as if an emperor was counting soldiers.

-Helong Park
The Helong Park sits on the left of a 1200-meter-high rock. Bronze Statue of Helong (the founder of Chinese People's Liberation Army), the largest bronze statue in a century in China, illustrates human harmony with nature and reflects a unique style.

-Bridge of Immortals
The Bridge of Immortals, also called ''the first bridge under heaven'', rests on the Monkey Slope and faces the Prince Cave. As a masterpiece of Mother Nature, it spans 26 meters, rise 60 or 70 meters across cliffs. It is made up of red sandstones with giant pines and azalea tress on two ends. More surprisingly, there are natural stone steps on it.

-Heavenly Warrior’s Gathering
Across the Bridge of Immortals, hundreds of stone peaks are densely packed in a canyon, which just looks like a group of imposing warriors listening to orders of a general. Such a forest of stone peaks is rarely seen in the world. 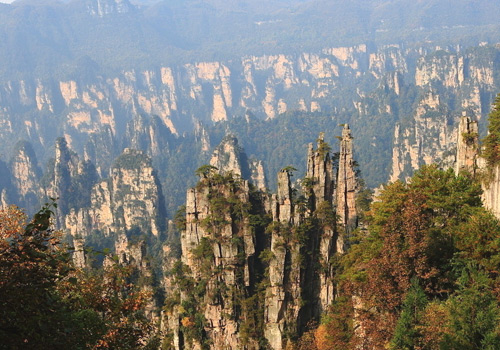 -Imperial Brush Peak
Imperial Brush Peak has inspired artists and photographers for a long time. It was once shown on over 30 magazines and newspapers. It is located in a valley on the west of Tianzi Pavilion (Heaven’s Son Pavilion). Looking from the vantage point on the northeast, ten rolling peaks soar up to the blue sky. The right peak looks like an inverted brush. And the peaks on the left looks like a finished picture. Legend has it that the stone brush is left by King Xiang.

-One Dangerous Step
Two peaks were cut through by a one-meter-wide gap. Life and death are so close here. Do you dare to across it?

-Training Horses by a Warrior
Tens of peaks rise from valley. Here you will see a horsed-shaped peak, beside which is a stone looking like a soldier with his hand on a bridle. According to a legend, they were horse and guard of King Xiang.

-Marshal Rock
Marshal Rock is said to be the embodiment of King Xiang. It looks like a general who is rallying his troops.

-Tianzi Peak
At the southwest of Tea-tray Pagoda, stands a 1200-meter-high peak, which is called ''Tianzi Peak''. It looks like a great man, who sits there, dressed in armor, holds an arrow in right hand, and scowls ahead, as if he was going to have a war.