The town of Fengdu, said to be the abode of devils, is one of the first stops on your Yangtze River cruise. The famous “Ghost City” deserves to visit. Situated on the northern bank of the river between Zhongxian and Fuling, the city was depicted as the City of Ghosts in two ancient, classic Chinese works “Monkey King” and “Strange Stories from a Chinese Studio”. The original of the town's extraordinary reputation can be traced back to the Han Dynasty (206 B.C.—220 A.D.) when two officials, Yin and Wang, became Taoist recluses here and eventually Immortals. Later in the Tang Dynasty, their names were combined to mean "King of the Underworld". 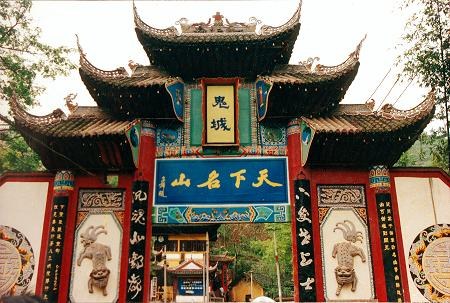 Thereafter, Mt. Mingshan gained its reputation as the 'City of Ghosts' where the king lived. Today, the town throngs with many tourists who come to visit temples and shrines dedicated to the gods of the underworld. Landmarks here bear horrific names. Last glance at Home Tower, Nothing-to-be-done Bridge, and Ghost Torturing pass the three trials for ghosts who wanted to enter the nether world.