Chibi, literally red cliff, located on the southern bank of Yangtze River in the northwest Chibi City, is a battle field ruin of a famous Chinese ancient battle happened before the period of Three Kingdoms (220-280). The ruins of Chibi Ancient Battle Field is the only surviving ancient battle field of China’s famous battles maintaining its original appearance, which was inscribed in the key protected cultural relic list.

The renowned Battle of Chibi, which left a glorious page on both China’s history and military, was a decisive battle fought in 208 at the end of Han Dynasty (202B.C-220A.D) between the numerically superior forces (with 260 000 soldiers) of the northern warlord Cao Cao and the allied forces (with 50 000 soldiers) of the southern warlords Liu Bei and Sun Quan for the conquer of the land south of Yangtze River. The battle ended with Cao Cao’s lose, ensured the survival of Liu Bei and Sun Quan and laid the foundation of later’s confrontation among the Three Kingdoms (Wei Kingdom of Cao Cao, Shuhan Kingdom of Liu Bei and Eastern Wu of Sun Quan). 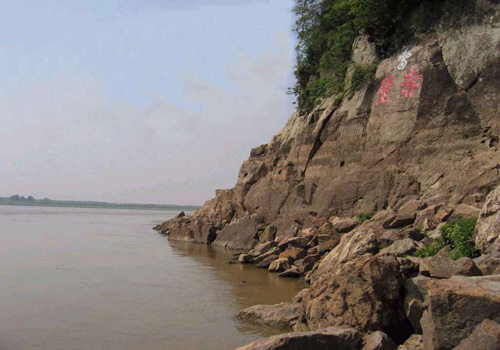 Today the engravings of the large characters of Chi Bi are found on a cliff-side which are believed at least one thousand years old. Included three connected mountains, Chibi Mountain, Nanping Mountain and Jinluan Mountain, Chibi Ancient Battle Field Ruin offers more for visit. There are a temple enshrining Guan Yu, a unbeatable hero to ordinary people and a god in both Chinese Taoism and Buddhism, a Baifeng Terrace to memorize the altar set up during the Battle of Chibi with two halls and statues of Liu Bei, Guan Yu, Zhang Fei and Zhuge Liang, a Cultural Artifacts Exhibition Hall displays more than 1000 cultural relics of Chibi, a tablets gallery with famous inscriptions describing the battle, a ancient style pavilion offering a spacious view of the Yangtze River, a museum exhibits articles related to Chibi Battle, a sculpture garden with sculptures of famous figures of the Three Kingdoms and an ancient gingkgo planted by Pan Tong, a military counsellor of Liu Bei, which is the only animate survival of the Battle of Chibi.