• The Qutang Gorge
The Qutang Gorge (瞿塘峡) is the first of the three gorges composing the Three Gorges scenic area on the Yangtze River. This is the shortest (8 km long) and narrowest gorge but also the most grandiose gorges to be seen during the cruise, starting in the Chongqing Municipality from the village of Baidi (Fengjie County) to finishing in the town of Daxi (Wushan County). The entrance of the gorge, marked by two paralleled mountains on each banks (the Chijia Mountain and the Baiyan Mountain), form what is called the Kuimen Gate (also called the Qutang Pass). This is where begin cruises through narrow canyons, high mountains and fast-moving waters like an imposing postcard-like scenery at the very heart of China. Containing numerous scenic spots along its banks, the Qutang Gorge is a highlight where seeing (from upstream to downstream): the County of Fengjie where stand ancient villages; the impressive inscriptions on the Chalk Wall; the Mengliang Stairway and Hanging Monk Rock: two living embodiment of a local legend; the Bellows Gorge, a tremendous part where ancient hanging coffins stand majestically; the Rhinoceros Looking at the Moon, the Iron Lock Pass (famous during ancient dynasties war times) and finally the Daxi Culture Heritage Site where learning about the Chinese Neolithic Culture that had been discovered years ago. The Qutang Gorge is definitely a section of the Three Gorges that is not letting its visitors down for it is where lots of attractions stand. The construction a little bit downstream of the Three Gorges Dam in 2006 has had a devastating impact on the cultural relics of that section for it has submerged lots of them. 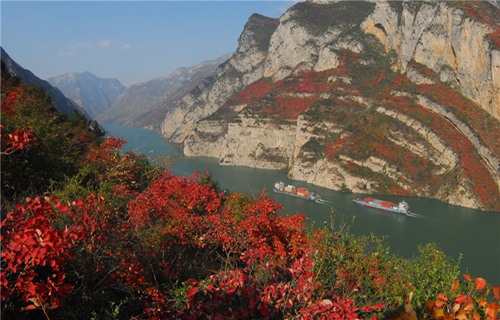 • The Wu Gorge
Second gorge of the Three Gorges scenic section, the Wu Gorge (巫峡) is a must-see section winding over 25 miles and where seeing some of the most important mountains of the river as well as the so-called “Lesser Three Gorges”. Starting at the Daning River estuary and ending at Badong city (Hubei Province), the Wu Gorge also called the “Large Gorge” is a highlight for this is where legends and beliefs have developed especially around the 12 peaks surrounding the gorge. Indeed, spread equally on the northern and southern banks of the river, the mountains all holding a name like in traditional Chinese habit are impressing every visitors for their uncommon shapes and topography. The Lesser Three Gorges starting on the western mouth of the Wu Gorge is composed of the  “Golden Helmet” and “Silver Armor” Gorge and the “Iron Coffin” Gorge. Largest tributary of the Yangtze River, this part of the river is worth a visit by tourists who will enjoy important historical relics such as the ancient plank road, suspended coffins, and the boat coffins. The Kongming Stele located beneath the Jixian Peak must have travelers attention too for this is where seeing the carved inscriptions of a Three Kingdoms Period famous character: Zhuge Liang.

• The Xiling Gorge
Forming nearly half of the whole Three Gorges section, the Xiling Gorge (西陵峡) is located between the Zigui and Yiling District (Chongqing Municipality) to the city of Yichang. Winding for 76 km, the Xiling Gorge is the largest and farthest section of the mighty Three Gorges as well as the historically most dangerous part of the Yangtze for its huge frightening whirlpools and rapids. Calmed by the recent construction of the two dams located at a few knots from Yichang seaport city, the Xiling Gorge is a now a smooth and calm river suitable for cruises. This gorge had been named “Xiling” for the presence of a so-called peak known this way since the Three Kingdoms Period. Divided in different little gorges, that is to say the “Precious Sword”, “Horse Lung & Ox Liver”, “Soundless Bell” and “Shadow Play” Gorges, the Xiling Gorge is also where are located some important scenic attractions and cultural relics. Indeed, the section is where seeing the hanging coffins, Sanyou Cave, Gezhou Dam and the most outstanding human realization: the Three Gorges Dam that stands as the most famous attraction that people may think of when talking about the Yangtze River. 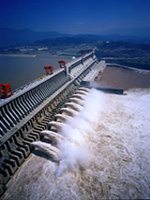 Located upstream of the city of Yichang stand the Gezhou and Three Gorges Dam. The two large-scale constructions have calmed the tumultuous waters of the Chang jiang that is today looking like a placid river where enjoying a luxurious cruise.

Most famous attraction above it all, the Three Gorges Dam is definitely what travelers wish to stop by during a Yangtze Cruise for it is the world’s biggest dam ever constructed.  Located by the town of Sandouping (Yiling District of Yichang, Hubei Province), the dam started construction in December 1994 for being operational in 2008. Today, this is the world’s largest power station in terms of capacity and hydroelectricity production. Teasing the strength of the mighty Yangtze, the dam has helped to control the annual flooding of the river valleys that did thousands of victims every year. Having increased the river's depth from just a few meters in some areas to over 100 meters, the Three Gorges Dam is though counter-acting the laws of nature. Some threats that it may break down have been expressed in recent times. Still, the dam is today the Yangtze River’s most impressive attraction along Yangtze Cruises, a stop that is impressing everyone coming there.