Known as "mini-Li River", the 43.5-kilometer-long Yulong River in Yangshuo is a tributary of the Li River. It passes through Yangshuo's 5 towns of Jinbao, Putao, Baisha, Yangshuo, Gaotian and feeds people and farmlands of the areas.

The total area covered by the river represents the largest natural ecological preserve in Guilin. Along the course from Yulong Bridge to the Gong Nong Bridge, there are 28 dams as well as hundreds of natural wonders; it has been hailed by scholars as one of the few places "where man and nature have met in perfect harmony".

The Yulong River offers visitors to Yangshuo a unique chance to experience some truly unique and inspiring scenic vistas, and is home to some of Guangxi Zhuang Autonomous Region's most ancient bridge structures (Yulong Bridge, Xiangui Bridge and Fuli bridge); some ancient villages were built in honor of Guangxi's most celebrated scholars and officials, and many of the sites remain in the original condition from the Qing and Ming Dynasties. 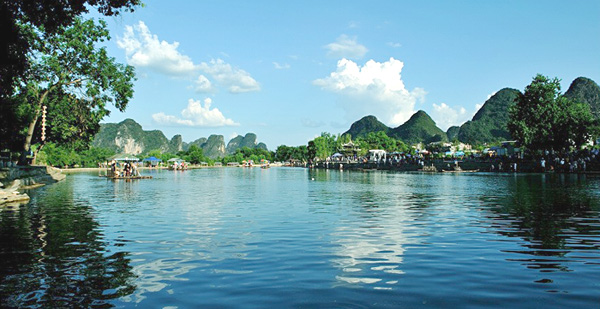 As a world-renowned river with much beautiful scenery and little pollution, the Li River always makes people marvel at its unique exquisiteness while the Yulong River surprises people with its morbidezza and tranquility.

Located in the upstream of the Yulong River, the Fuli Bridge is a stone bridge that measures 30 meters long, 5 meters wide and 10 meters high and as built at the height of the Ming Dynasty around 500 years ago. It compliments its surroundings perfectly and its deep grey slabs blending in with the mighty karst mountains and the ancient trees that hang down over the river bank. It is the perfect place to enjoy the beauty of Yangshuo.

Ruins of the Ancient City 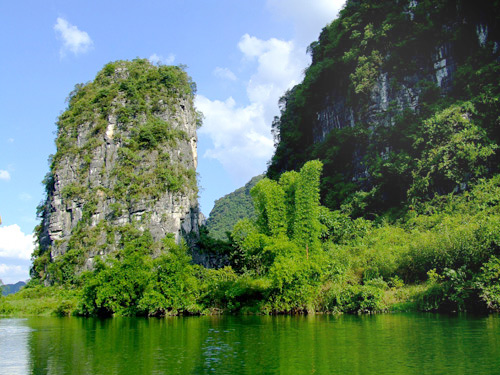 Off the banks of the Yulong River near the ancient Xiangui Bridge lay the ruins of an ancient Chinese city. Built in 621 AD, these ruins cover over 39 acres of the countryside and the ancient city wall still stand there today. On the opposite bank of the ruins, there is a rock cave and the most amazing thing about it is that it is neither over-dry nor over- humid but always temperate. Therefore, it is believed to be a good place for study and rest. Also, near the cave is a natural spring which is famous for crystal water and never running dry. 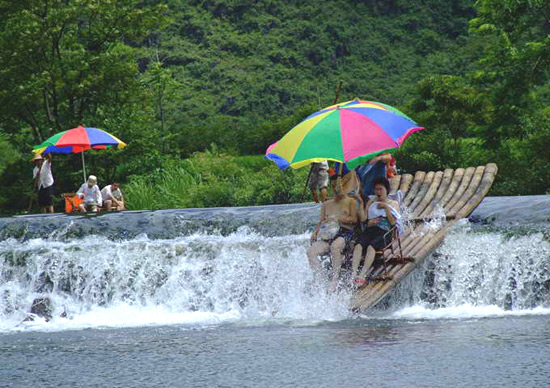 Hidden of the banks of the Yulong River in front of the famous peaks of Yangshuo, the Eight Immortals Cave has been described by the Ming Dynasty scholars as "Hiding the in safe bosom of the mountains". Within the crag there is are small "rooms" made from naturally hollowed out stone, totaling 7 stone caverns in this cave to be explored.

For those who are interested in rafting, there are two choices to experience it on the Yulong River: Half-course rafting and whole-course rafting.

1. From Yangshuo catch a bus to Baisha Town, from Baisha hire a three-wheeled buggy down to the river where rafts are available.

2. Alternatively, from Yangshuo catch a bus to Jinbao Town and hire a raft directly.