Chinese name: 日月山 (Ri Yue Shan) Location: Located in the southwest of Huangyuan County, Xining City, Qinghai Province. Opening time: 08:00-17:00 Entrance fee: CNY25   How to get there: There are regular buses from Xining to Riyue Moutain, which start every halfhour. Best time for visit: from May to September. The verdant grasses, wild flowers and tents on the slopes of mountain will provide a chance to get close to the beautiful plateau landscape.

Situated 40 kilometers (25 miles) from southwest of Huangyuan County, Riyue (Sun and Moon) Mountain is an important geographic divisional line in the geography of the country. The scenery in both sides is totally different: there is the rural scenery of the highland on the east side whereas vast grassland scenery on the west. Two kinds of scenery with vast differences within a mountain is very rare in China. The average height of this mountain is about 4,000 meters. To the east of Riyue Mountain is the Huangshui Valley, to the northwest is the Qinghai Lake and to the southwest are continuous rolling mountains, vast grassland and scattering tents. Riyue Mountain is called "nimadawa" (尼玛达哇) in Tibetan language and it is called "nalasala" (纳喇萨喇) in Mongolian, both of which mean sun and moon. Riyue Mountain is one of the most famous and popular tourist attractions in Xining and from May to September Riyue Mountain is particularly beautiful as the grass is lush and wildflowers grow in abundance. 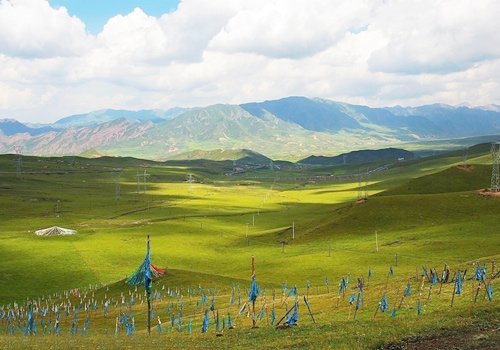 The origin of the name of Riyue Mountain

Riyue Mountain was called Russet Ridge during the Tang Dynasty (618-907) because of its grassless russet mountaintop. Legend has it that in the 641 during Zhenguan Period (627-649), when Princess Wencheng left for Tubo to marry Tibetan King Songtsen Gampo, she was very sad and painful. So the Emperor of Tang Dynasty gifted her a sun-and-moon treasure mirror and said to her that if she looked in the mirror at the boundary of Tang Dynasty and Tubo (Tibet), she would see her hometown and her parents. When Princess Wencheng reached the boundary, she took out the mirror and looked in it immediately. However, what she could see nothing in the mirror but a thin face of herself and the setting sun shining on Russet Ridge. She came to realize that the Emperor of Tang Dynasty had cheated her for the friendly relationship and the long-term peace between Tang Dynasty and Tubo. Princess Wencheng was so angry and sorrowful that she threw out the mirror. The mirror was broken and the fragments were just landed on the two hills. The east half piece of the mirror faced the west reflecting the rays of the setting sun and the west half piece of the mirror faced the east reflecting the rising moon. Hence, the name, sun and moon mountain, was came out.

The Ri (Sun) Pavilion and the Yue (Moon) Pavilion

The Ri (Sun) Pavilion and Yue (Moon) Pavilion are key destinations for visitors. They were built on each side of the mountain in memory of Princess Wencheng. It is built in a Tibetan architectural style and the only sign to distinguish the two pavilions is the sun and moon painting on the top of the pavilion. There is a memorial monument near the Sun Pavilion, recording the great contribution of Princess Wencheng to the development of Tibet, and the murals in the pavilion recreate the scene when the princess entered Tibet and her life in Tibet. The murals in the Moon Pavilion particularly depicts Princess Wencheng introduced advanced culture and technique into Tibet, including crop seeds, medicine, music, dance, astronomy, geography and Buddhism. 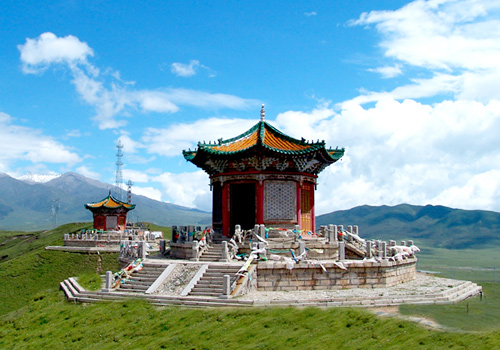 The Daotang (backflowing) River springs from the west of the Riyue Mountain flowing west to the Qinghai Lake. There is a well-known legend concerning Princess Wencheng. When she passed by the mountain, due to homesickness her tears dropped and became the Daotang (Backflowing) River. Its flow westward symbolizes the princess's resolution not to return forever. In fact, it is the only river flowing from the east to the west in China.

Along the Tang and Fan Ancient Road to a platform, there is a statue of Princess Wencheng with a height of 9 meters and a width of 6 meters. Nobly dressed, Princess Wencheng wears a cloak, embraces a mirror and gazes ahead fixedly. Behind the statue, there is a 20-meter-long sculpture which is divided into three parts: the farewell at the ancient capital, throwing out the mirror at Chiling Range and the king of Tibet meeting his bride. 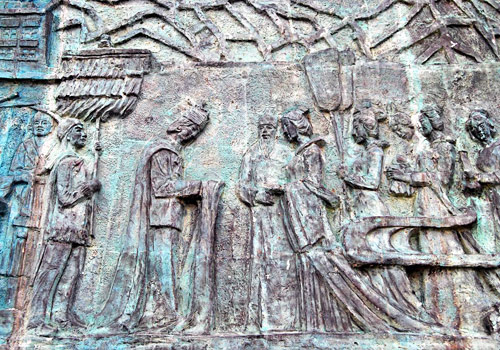 In the mountaintop square, the blue "Riyue Moutain" Stele and Huiwang Stone are erected. It was the place where Princess Wencheng looked back to hometown with tears the last time. Princess Wencheng, a little and weak girl, for the stability of Tang Dynasty and the permanent peace between Central Plains and Western regions, married far away to shoulder the heavy burden of national unity. Standing here and imagining that the back of Princess Wencheng is far away, you will be proud of her and have profound respect for her. It was gratifying that Songtsen Gampo and Princess Wencheng fell in love with each other at the first sight and they lived happily. Songtsen Gampo had specially built a palace for her, which is Potala Palace. Princess Wencheng lived in Tubo nearly for 40 years and was highly respected by the locals.