Chinese name: 青海湖 (Qinghai Hu) Location: in Qinghai Lake Basin, 200km from Xining City, northeast of Qinghai Province. Tickets: CNY100 during high season (Apr.15th-Oct.15th), CNY50 during off season (Oct.16th-Apr.14th); extra CNY115 for Birds’ Island, CNY90 for Sand Island, CNY45 for a pleasure-boat ticket (not available in winter), and CNY30 for Riyue Mountain (Sun-moon Mountain). Opening time: all day long Best time for visit: April-August How to get there: take coach to Heimahe (黑马河, Black Horse River) at Xining Coach Station, which will take about 5 hours, and then rent a minivan.

Travel tips:
1. Best time for hiking: It is feasible for hiking around Qinghai Lake throughout the year, while most hikers choose summer due to humid and warm weather. If with the Bird Island being the destination, May is the best time with returned migratory birds; if with the aim to enjoy rape flowers, June and July are the best choices; July and August are the time for gorgeous grassland scenery, and September is the time for the nice autumn view of Qinghai Lake. 2. Accommodation: There are a Bird Island Hostel and some other private hostels and tents’ hostels operated by locals providing beds for overnight; generally, the conditions is simple but clean, and only offer simple food. Some people may spend the night by the lake in their own tents. 3. It is 200km from Xining to Qinghai Lake. The drive will take about 4 hours and reach Bird Island via the Riyue Mountain. The lake is 400 km in circumference. It is a 50-min-drive from Heimahe Town to Bird Island Hostel, and 15 km from the Bird Island Hostel to the Beach or the Bird Island. 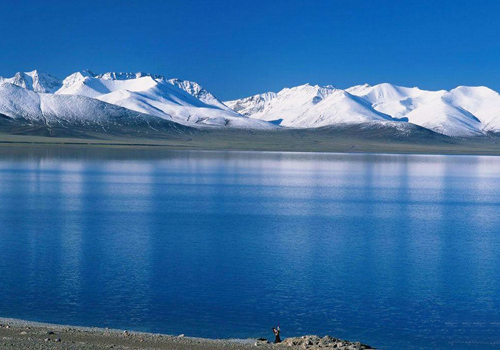 Qinghai Lake, literally Blue Lake, is called Koke nuur by Mongolian, which identically means blue lake. Located in Qinghaihu Basin, northeast of Qinghai Province, it is the largest inland lake as well as the largest saline lake in China. The source of Qinghai Lake relies on the direct runoff and rainfalls, as well, another over 40 rivers empty into the lake with the Buha River being the largest.

Qinghai Lake is enveloped by lofty mountains, and it has two sub-lakes, a saline Gahai Lake and a freshwater Erhai Lake. The open lakeside terrain, sufficient water and temperate weather make the area a natural pasture with lush waterweeds and offer the lake vast grasslands, numerous rivers, and quiet and secluded ambient. The picturesque beauty of Qinghai Lake is consists of a verdant grassland dotted with flocks of sheep and goats, the fragrant golden rape flowers waving with the breeze, shepherds’ tents scattered around the lake, and the charming sceneries presented during the sunrises and sunsets. 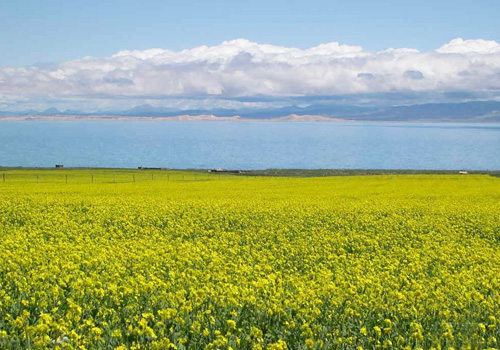 Being a miraculous tourist site, Qinghai Lake provide more as a enormous treasured lake drawing great attentions from scientists from the world. Despite its salinity, the lake has an abundance of fish and reckoned as the largest natural fish base in northwest China and it particularly teem with edible naked carp. Ample mineral resources are also explored in the lake. To visit Qinghai Lake, it is the enjoyment of plateau pasturing area, and much more than this are a ride of yak wandering on the grassland, a climb for sand dune, a visit in a local Mongolian herbsman, and an experience staying in Mongolian tent, tasting of delicate snacks of local favors, such as milky tea, buttered tea, fried noodles and barley wine.

According to legend, some 1000 year ago in Tang Dynasty (618-907), before the princess Wencheng went to Tibet to marry with the King of Tobo Kingdom, her father, the Tang Emperor had given her a magic mirror, which was said can mirror the scene of Chang’an (present Xi’an), the princess hometown. On her way to Tibet, princess Wencheng missed her hometown very much and took off the mirror, and indeed she saw the scenes of Chang’an, just couldn’t help crying; however, she knew what her mission was- to win a peace between the Central Plains Area and Tibet by her marriage, so she determinedly threw out the magic mirror; unexpectedly, the mirror just streaked a flash of golden light and then reduced to the Qinghai Lake on the land.

There are five islets in Qinghai Lake; the Haixin Hill is the largest, and the Bird Island is the most famous with over 100 000 birds. 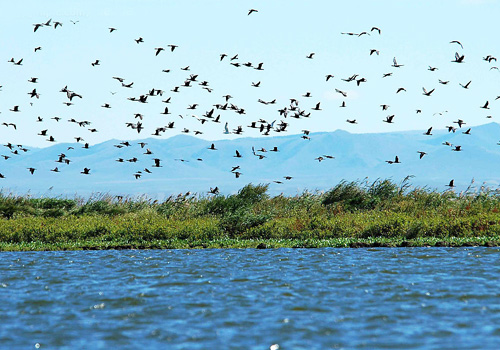 Situated in the west of Qinghai Lake, the Bird island covers only 0.5 square kilometer, but houses over 100 000 migratory birds every summer. Also named as Egg Island due to a good deal of bird eggs dotted on the island, the Bird Island is shaped like a tadpole with a big head in the east and a narrow tail in the west and has a length of 1500 meters. As the No.1 of the eight Birds Natural Reserves of China, the Bird Island of Qinghai Lake is the breeding ground of more than 10 migratory birds, such as barhead goose, Great Blackneaded Gull, cormorant, etc.

Covering 1 square kilometer, Haixin Hill is celebrated by rocks and graceful sceneries. Situated in slight south of the central Qinghai Lake, it is 25 kilometers away from Bird Island and has a highest altitude of 3266 meters. Composed by granites and gneisses, the island is almost covered with sandy soil and has a high vegetation coverage, namely 50%. The common plants species on the island are wheatgrass, Achnatherum splendens, Oxytropis falcate Bunge, Kobresia, Thermopsis lancaolata, etc.

The northeast of the islet has fault klint, and not far from it is a cylindroid rock erecting in the lake. It is the breeding site for cormorants and the vegetation coverage of this islet is as high as 90%. 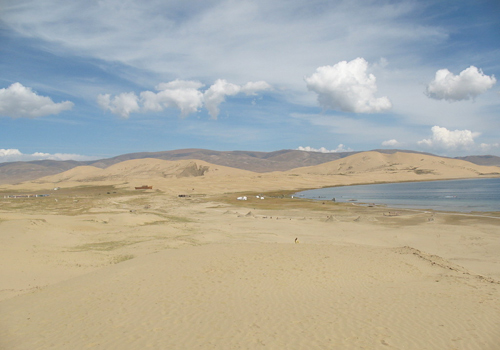 Located in the northeast of Qinghai Lake, the Sand Island was once the largest islet in the lake with an area of 18 square kilometers. It took shape because of the accumulation of sands. All covered with sands on the surface, it is an island with no vegetation, but it is the paradise for Great Blackneaded gulls.

Located in the southwest of the lake, it is consists of 7 compacted limestones and reefs. Only 17 meters in height, and 0.056 square kilometer in area, there are only Artemisia dubia growing between gravels. It is about 20 kilometers from the Bird Island or the Haixin Hill.