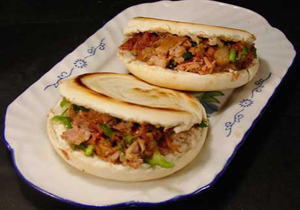 The biggest difference between Xi’an food and that of other regions lies in its diversity, richness and numerousness. Main course in Xi’an, that is, Shaanxi Cuisine counts more than a thousand, while refreshments are over a hundred. Hui Minority-flavoured snacks are peerless around China, not only because of its varieties but also its exquisite workmanship, distinctive taste, and rich nutrition. Consequently, it has developed into one of the important branches of Muslim Cuisine as well as national dishes of Chinese Cuisines. With respect to cakes in Xi’an, they are countless, too. Therefore, friends overseas can enjoy all kinds of food on the street and at the same time will feel amazed at the large scale, wide assortment and long opening hour of the restaurants and stalls in Xi’an. No wonder Xi’an has earned commendation as “Kingdom of Snacks” from the food paradise French!!

As the renowned snack, rou jia mo originated from Warring States (475BC-221BC), when it was called “han rou”. In Xi’an, Fan’s cured meat has become a synonym for Lazhi meat, whichi is braised pork with soy sauce, softer than the usual one. This is one part of rou jia mo; the other part of it is bai ji buns. Put the cured meat into the just baked bai ji mo, and in this way, a delicious rou jia mo is made. Have a taste of it and you will feel the buns savoury and the meat soft. Not only is it rich in protein, fat but carbohydrate.

Pita bread soaked in beef and lamp soup is one of the most celebrated snacks in Xi’an city. Stew fine beef and lamp until they are tender as soup; then break the pita bread into pieces before cooking. After trying it, you may have a small bowl of soup. It will taste better if you have some pickled sweet garlic at the same time. Su Dongpo, a well-known scholar in the Northern Song Dynasty (960-1127) once put it, "While Gansu province enjoys bear jerky, Shaanxi province boasts pita bread soaked in beef and lamp soup".

Qin Town Liangpi has a history of more than 2000 years. It is said that liangpi has already existed as a tribute during the reign of Emperor Qin (221BC-210BC). In some measure, Qin Town Liangpi is the grandfather of liangpi around China. It is mainly made from wheat or rice flour. Added to green vegetables, bean sprouts, seasoning and most importantly, capsicol, liangpi will taste wonderfully refreshing.

The famous snacks banquet in Xi’an is developed from those from Tang Dynasty (618-907) and Chinese traditional dumplings. The ingredients of the banquet are excellent and the shapes of the dumplings are feasts for the eyes. The name for the banquet is due to various dumplings presented on the table.

Guokui is a traditional pasta snack that enjoys great popularity in Xi’an. It used to be gift from grandmother to grandson when he was one-month-old; however, later it became a local food. Guokui is round, 1.3 inches thick and 2.5 kilogrammes in weight with spoke-patterns on it. It tastes crisp and can be long kept. Indeed, Guokui is a good choice for you to give as a present.

Hu Lu Tou is a special local flavour snack in Xi’an. It is similar to pita bread soaked in beef and lamp soup in terms of breaking the pita bread into pieces. However, the main ingredient of Hu Lu Tou  is not mutton but chitterlings. Wash hog fat end, pork tripe, and pig’s large intestines before making soup with seasoning; then cook the pita bread with the soup. As it is rich in highly saturated fatty acid and high-cholesterol, Hu Lu Tou tastes yummy while its soup is quite strong!

Pepper soup with meatball is a kind of Muslim food. People of Hui minority have changed its original sour taste to salty taste that can perfectly sets off the overpowering smell of the lamp and beef soup.

There are four key steps of making rice and jujube cakes. The first step is to soak the sticky rice in the clear water. After a short moment, wash the rice before leaching. Second, fill the rice steamer with first jujube then rice, layer after layer. Third, steam it for minutes with high flame then low flame. The last step is to add some lukewarm water to the steamer and cold water to the boiler.

The main ingredients of Shi Zi steamed bun consist of flour, lard, plant oil, edible salt, aniseed, pepper and green onion. The dry and yellowish bun with its midst sunken and edge bulge looks like a gold-made salver. It tastes first crisp then soft. It is not only rich in nutrition, but easy to digest, and easy to carry about. For some residents in rural area, Shi Zi steamed bun is an ideal choice to give as a present to friends, puerperal and patients.