Chinese name: 秦始皇陵 (Qinshihuang Ling)
Location: at the foot of Mount Li (or Lishan Mountain), about 30 km east of Xi'an City, Shaanxi Province.
Opening time: 08:00-17:00
Entrance fees: 40 Yuan in peak reasons and 20 Yuan in off season. Or visitors can buy a coupon ticket (110 Yuan) containing visits to the Mausoleum of Emperor Qinshihuang and the Terracotta Army and Horses.
How to get there: take bus No.306 (green outside) and get off at "Qinshihuang Ling Zhan" (秦始皇陵站, the stop of Mausoleum of Emperor Qinshihuang).

Commonly considered as an outstanding statesman and strategist, Emperor Qinshihuang (259BC-210BC) of Qin Dynasty (221BC-206BC) is the first sovereign who proclaimed himself emperor in Chinese history. Born in Handan, the capital of Zhao Kingdom (one of the seven powers during the Warring States Period of China), Qinshihuang spent his childhood away from his country with his mother (a concubine of King Qinzhuangxiangwang of Qin Kingdom) because of political reasons. At his age of only 13 years old, he was enthroned to be the king of Qin Kingdom and became his unusual political life. 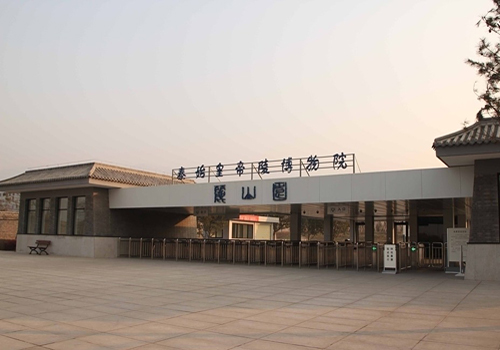 During his reign from 236BC to 221BC, he defeated other six coordinate kingdoms of Han, Zhao, Wei, Chu, Yan and Qi, thoroughly ending the age of separatist regime of China and founding the first unitive, multi-ethnic and centralized dynasty in Chinese history.

Embraced by the luxuriantly green of the Mount Li and the winding Wei River, the Mausoleum of Emperor Qinshihuang occupies some 56.25 square kilometers (equaling 78 Summer Palaces), with large-scale gave area at the south and other palace complex at the north. As the graveyard of the first emperor in Chinese history, the Mausoleum of Emperor Qinshihuang is second to none in scale and luxuriousness compared with any other Chinese royal tombs. In accordance with the layout of Xianyang, the capital of the dynasty, the mausoleum was designed to be the shape of "回", protected by a 3840-meter-long inner wall and a 6210-meters-long outer wall. Over 600 pits for sacrifice servants and horses, pottery figurines, rare and valuable animals…have been found between the inner and outer walls and More than 100,000 pieces of cultural relics have been unearthed.

According to historical data, the building of the Mausoleum of Emperor Qinshihuang was planned and designed by the prime minister Li Si and undertaken since the year Qinshihuang ascended the throne, taking as long as 38 years' hard work of some 720,000 workingmen. It is recorded that the building materials were selected and transported from Hubei, Sichuan and other provinces. The original height of the mound is about 115 meters but now has deduced to about 70-80 meters because of natural eroding and factitious destroy in the past over 2000 years. 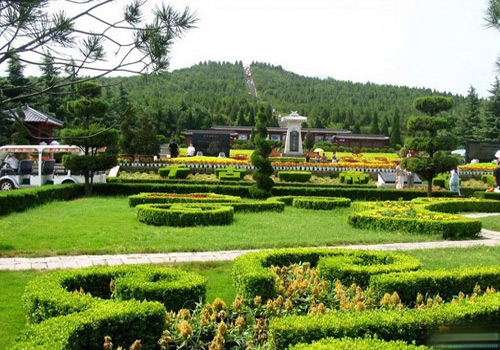 In 1974, the grand mausoleum of this great Chinese emperor, which is surrounded by the world-famous Terracotta Warriors and Horses, was discovered and put under national protection. 13 years later, it was put on the list of World Cultural Heritage by the UNESCO (United Nations Educational Scientific and Cultural Organization).

To re-present the dignity of Emperor Qinshihuang and his empire, a performance of guards changing of the mausoleum and sand tables with sound, light and electricity are showed, from which visitor can directly learn the spectacularity of this mysterious mausoleum.

The Largest Underground Imperial Mausoleum in the World

So far, the Egyptian pyramids are known as the largest imperial mausoleum on the ground in the world, while the Mausoleum of Emperor Qinshihuang counterposes them as the one underground.

Located under the mound, the underground palace of Qinshihuang is the core of the whole mausoleum area. According to Shiji (or The Records of the Grand Historian), the first systematic Chinese historical text written by Sima Qian (145BC or 135BC – 87BC), the mausoleum was excavated down to the spring source and the coffin of Qinshihuang was supported by a copper foundation bed. It is also recorded that the coffin chamber was filled with mercury that symbolizes rivers, lakes and oceans; the roof was inlayed with legendary luminous pearls that represents the sun, the moon and stars; and the inside of the mausoleum was lit up by fish oil lamps, praying for eternal brightness. And, to protect the mausoleum from burglary, automatic hidden devices were set up inside – tomb raiders would be shot once they entered the underground palace.

The Terracotta Warriors and Horses 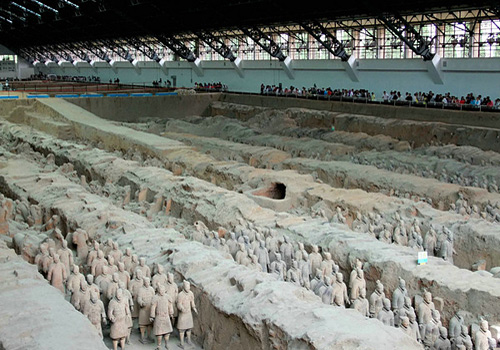 The pits of The Terracotta Warriors and Horses located 1500 meters away are attached to the Mausoleum of Qinshihuang. The fortuitous discovery by the local farmers in 1974 shocked the world. Jacques Rene Chirac, ex-president of France, praised it to be "the eighth world wonder". Up to now, three pits including over 8000 terracotta warriors and horses and over 40,000 bronze weapons have been unearthed and are opened to the public as a museum.

Nine Mysteries of the Mausoleum of Emperor Qinshihuang

1. How deep is the underground palace?

Considering that nowaday scientific technologies are not advanced enough to keep the 2000-year-old mausoleum original after unearthing, further excavating work is still not carried out up to now.

In history texts, the mausoleum of Emperor Qinshihuang is described to be "too deep to dig further", but how deep exactly? Some supposed that the deepness of the mausoleum is 500-1500 meters. However, the conjecture seems not so credible if deduced by nowaday scientific theory: if the underground palace was dug into 1000 meters beneath the ground, it would be much lower than the Wei River nearby, that means it is hard for the hydrops in the palace to drain away and it is in all probability that the river would flow backward into the palace.

In spite of different conjecture about the deepness of the palace since it was discovered, studies and researches on the mystery never stop.

2. How many gates are there in the underground palace? 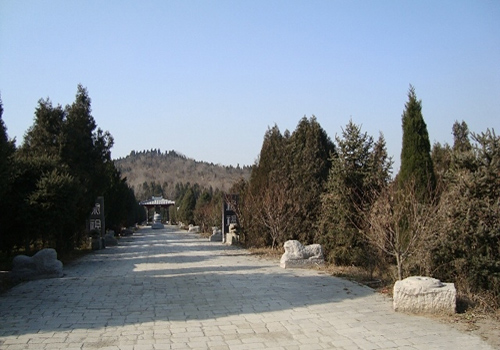 On September 17th of 2002, a TV live showed the world the process of archaeologists exploring the Egyptian pyramids. Archaeologists sent a robot into a pyramid at the first stone gate of a pyramid, unexpectedly, the robot was stopped by a second stone gate and the archaeological work was forced to be suspended. The exploration revealed that the pyramids were probably designed with more than 2 gates. How is the Mausoleum of Emperor Qinshihuang?

According to Shiji, when the construction of the mausoleum came to the end, three gates were closed without any advance notice and the workingmen at work were shut inside, which made the design an eternal secret and kept the mausoleum safe to great degree. But does such a carefully-designed underground imperial palace have only three gates? Or the actual situation is far away from people's imagination?

3. How to understand "The ceiling represents the heavens"?

Another piece of important information about the palace in the Shiji says that "The ceiling represents the heavens". Archaeologist guessed that "heavens" probably refer to a whole mural of constellation on the ceiling of the palace just like that was found in many ancient tombs. In traditional Chinese symbolic meaning, "heaven" and "land" also metaphorizes the country an emperor governed. Did Emperor Qinshihuang wish to continue his rule in this way underground after his death?

4. The mystery of mercury in the underground palace.

The Shiji and some other historical data mention that a great deal of mercury was buried in the palace and it has indeed turned out by geologists that the soil in the mausoleum area contains much more mercury than that of other places. For more details about the mercury, more researches are still needed to be done in the future.

5. How many treasures are there in the underground palace? 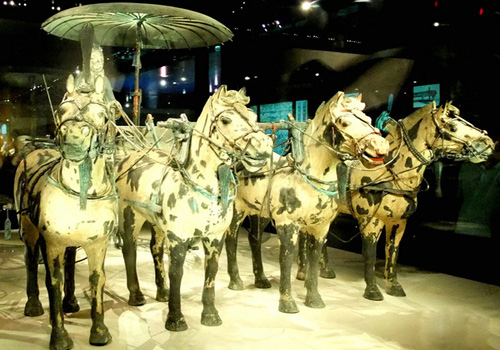 Many Chinese ancient scholars have written in their texts that "the palace is filled with countless rare treasures", "No any other mausoleums in history are as grand as Emperor Qinshihuang's". At the end of 1980s, a large set of exquisite color-decorated bronze chariots and horses and a set of wooden ones with gold and silver decorations were excavated to the west side of the palace. The workmanship of them surprised the archaeologists. Such amazing sacrifices were buried outside the palace, so what more alluring wealth is collected inside this mysterious palace? The Shiji clearly proclaims there are "gold wild goose", "pearls and jades", "emerald"… but more are expected to be unearthed in the future.

6. Is the coffin wooden or coppery?

What material is the coffin of Qinshihuang made of? No clear answer can still be found historical records. Some scholars suppose it is coppery, but the description in the Shiji that "the inside of the coffin is smeared with copper and the outside with paint" seems to deny the guess, as it is no need to paint it like that at all if the coffin is coppery.

7. Is there any space in the Underground Palace? 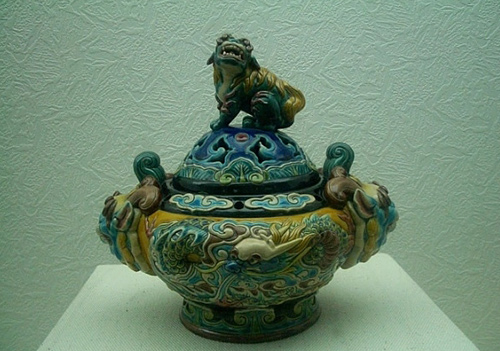 Archaeological explorations came to a conclusion that the underground palace is an erect cuboid with a large upright wooden coffin. If so, all the passages leading to the mausoleum should have been tamped with earth and there would be no any space inside the palace. However, historical dada records that Li Si, the prime minister who took the charge of constructing the mausoleum, said that "The mausoleum is unbreakable and combustible with difficulty. When knocking on the outside of the coffin chamber, people would hardly find that there is space inside". If the record is real, the coffin chamber should be almost vacuum. Due to the limited scientific technology, deeper exploration into the core of the mausoleum is still a problem.

8. Deadly booby-traps in the palace?

It is written in the Shiji that Emperor Qinshihuang had given a lot of care in guarding against theft, including arranging automatic deadly booby-traps. If it is true, that would be the earliest recorded burglar alarm in Chinese history. But how did people make such accurate devices 2200 years ago?

9. Is the remains of Emperor Qinshihuang complete and in good condition?

In the middle of 1970s, the discovery of well-preserved female remains at the Mawangdui Han Tomb in Changshang amazed the world. Now that the Qin Dynasty is less than 100 years earlier than the age of the Han Tomb, is it possible that Qinshihuang's is still well-preserved as well? Qinshihuang passed away during his inspection. It was in hot summer and it took over 50 days to transfer it back to the imperial city. Did people have mastered some secret aseptic technic to keep the body of Qinshihuang in good condition after he died?