Chinese name: 华清宫 (Huaqing Gong)
Location: at Lishan Mountain (25 km east of Xi'an), Lintong District, Xi'an City, Shaanxi Province.
Opening time: 07:30 – 18:00
How to get there: If you arrive in Xi'an by train, you can take buses No.914, 915, or 306 at the east of Xi'an Railway Station and get off at the stop of Hua Qing Chi (华清池, Huaqing Hot Springs). It is suggested to take No.306 (green outside), which depart every 15 minutes via the Huaqing Hot Springs, the Mausoleum of Emperor Qin Shi Huang and the Terracotta Army and Horses.
Best time for visit: spring (March-May) and autumn (September-November).

Huaqing Palace, also known as Huaqing Hot Springs, is a well-known historic site and an AAAAA tourist attraction of China. It gets its fame for being the place where the romantic story of Emperor Tangxuanzong of Tang Dynasty (618-907) and his beloved Yang Guifei (or Concubine Yang) took place.

As a matter of fact, the site had been as an imperial palace for emperors' short stays away from the capital for more than 3000 years. Emperors of Zhou, Qin, Han, Sui and Tang dynasties spent the winter at this place every year. Emperor Zhouyouwang of Western Zhou Dynasty (1046BC-771BC) is said to be the first emperor who ordered to build a palace at the site. In the following dynasties, the palace was repaired and expanded for several times, given the name of "Hot Spring Palace" and finally denominated "Huaqqing Palace" by Emperor Tangxuanzong. The palace was constructed above hot springs, hence the site is also called "Huaqing Hot Springs". 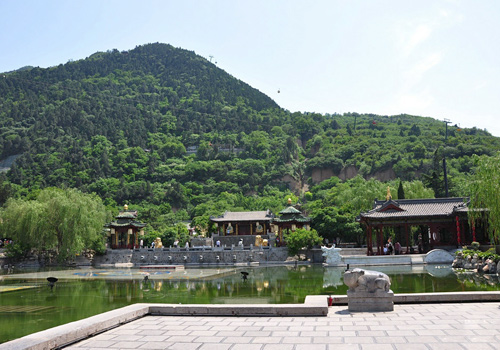 In Tang Dynasty, emperors would come to Huaqing Palace with their concubines every October and did not leave until spring came. It is recorded that Emperor Tangxuanzong and Yang Guifei visited it most frequently, as many as 36 times from 714 to 755, with the Flying Frost Palace as the bedroom.

Suffering from continuous wars, the grand original structures had been destroyed in fires and the existing one is built in 1959 according to historical records.

What to see in Huaqing Palace scenic area?

Expanded westwards for nearly 30,000 square meters, the Lotus Garden comprises its main body – Changsheng Palace (aka Palace of Eternal Life) – and other annexes such as Debao Building, Guolao Medicine House, Royal Tea House and Goddess Pavilion and the Lotus Lake.

2. The Relic of the Imperial Hot Spring of Tang Dynasty

The relic was discovered in April of 1982. The excavating that lasted for over three years on an area of 4600 square meters unearthed five imperial hot spring sites, including the Lotus Spring of Emperor Tangxuanzong and Yang Guifei, the Begonia Spring, the Star Spring of Emperor Tangtaizong, the Prince Spring and the Shangshi Spring. Meanwhile, more than 3000 pieces of ancient articles were unearthed. 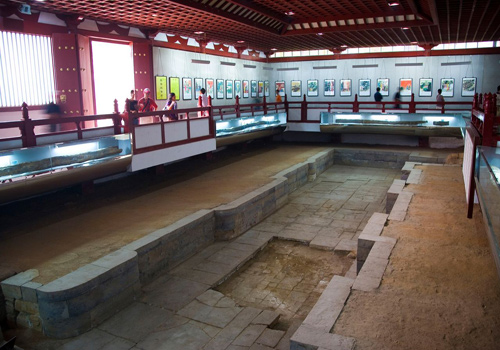 The water in the current pool is very clear that one can see down to its bottom. Every hour as much as 113 tons of hot water flows out from the four sources from a stone cave, at a temperature of 43 degrees. One of the four spring sources was discovered and used since 771 BC and the other three were developed at the second half of the 20th century.

The water of the spring is proved to contain several mineral and organic substances which are good for treating some diseases such as dermatosis and arthritis. Now the hot spring center has more than 100 hot spring rooms with a maximum reception capacity of nearly 400 people at a time.

The Nine Dragon Lake is an artificial lake excavated in 1959, about 5300 square meters in area. The lake is divided by the Nine Dragon Bridge into the upper lake featuring modern fountain facility and the lower lake featuring dragon-shaped boat. Along the lake are the Dragon-shaped stone boat, winding corridor and series of Tang-styled palaces and pavilions, with the red of the buildings and the green of the greenery contrasting vividly. 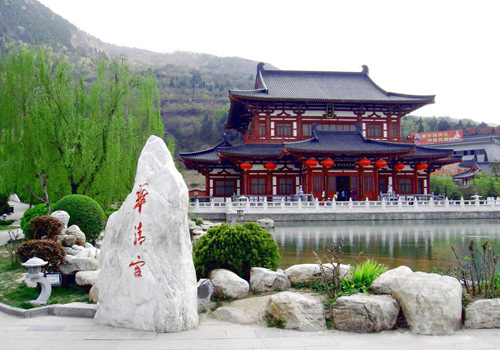 The Palace of Eternal Life is a four-storeyed exhibition hall rebuilt in 2005 (the original built in 738), displaying the Tang history, culture and articles. The first floor shows the life in imperial palaces and diplomatic protocols; the second floor is a miniature of the development of Tang, the most prosperous age in ancient China; the widely known romance of Emperor Tangxuanzong and Yang Guifei is introduced in the third floor; and on the top floor the 6000-year-old human activities on the site of Huaqing Palace is revealed systematically.

Just as the name indicates, it is a building joined by 5 single halls. Laying to the Lishan Mountain in the south and to the Lotus Pond in the north, this wood and brick structure stands there as the main body of the Guhuan Garden, accompanied by the Three Halls Building, the Watching River Pavilion, Rainbow Bridge and the Rosy Clouds Pavilion.

Pear Garden, or Li Yuan (梨园) in Chinese, is the name of the orchard in Huanqing Spring as well as the antonomasia of classical Chinese music and dance. The name referred to art since 714 when the garden was decided to be the arts center by Emperor Tangxuanzong, which made it the first royal art school of music, dance and opera in Chinese history.

7. The Relic of the Ancient Well of Tang

No else wells exist in Huaqing Palace today except it. It was a private well for emperors and his family only. When discovered in 1987, this over thousand-year-old well kept a depth of 8.3 meters, 1.9 meters in length and 1.26 meters in width, 0.25 meters in wall thickness. Unfamiliar with most wells, the well is not circular but elliptic in the well bore and the mouth.

8. The Forest of Steles 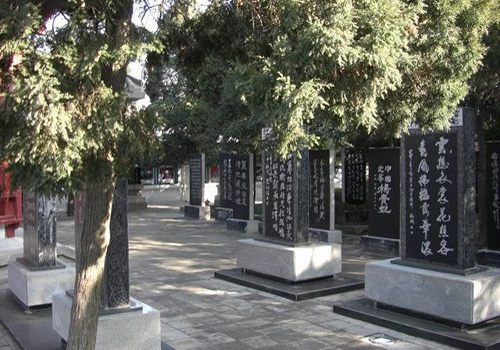 There are more than 30 famous ancient stone steles, stone inscriptions and carvings in Huaqing Palace, among which the "Stone Stele of Hot Spring" (written by Emperor Tangtaizong in 647, the original has been disappeared and a duplicate one is made to placed there today) and the "Stone Stele of Hot Spring of Northern Wei Dynasty" (the oldest real material about Huaqing Palace) are considered to be most outstanding.

9. The Song of Everlasting Sorrow 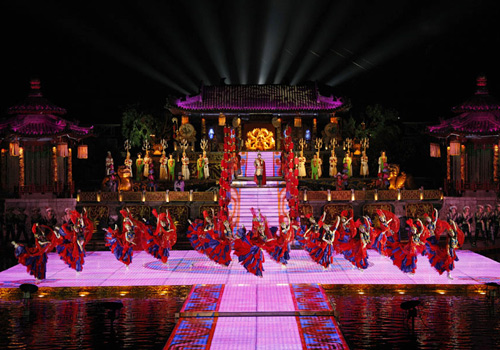 The show tells the lifetime experience of Yang Guifei. She won the emperor's favor since she was selected to be the emperor's concubine. However, her fortunate life ended suddenly one day because of a rebellion started by a general and she had to escape to mountains from the imperial palaces with the emperor. Unexpectedly, the emperor's spoiling Yang Guifei aroused the anger of the imperial army, who thought the woman was the scourge that made the emperor unconcerned about the state affairs. Finally, the emperor was forced by the army to order his beloved to suicide there. 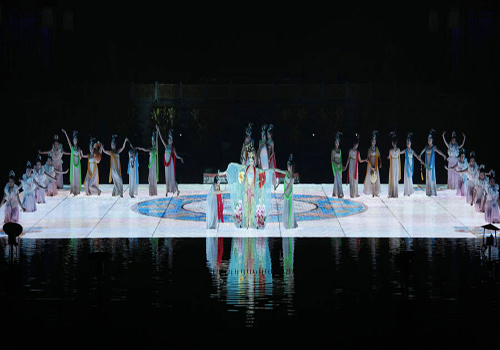 This is a large-scaled live-action historical show performed by 300 professional actors and actresses on a stage on the Nine Dragon Lake, with the Lishan Mountain as the background. Gorgeous natural phenomena produced by hi-tech equipments, the 700-square-meter LED screen and the underwater stage that can move up and down jointly represent a sad historical story as well as a successful modern art work in vision and perception.