Benefiting from the cemetery of the Hanyangling Mausoleum of Emperor Hanjingdi (188BC-141BC) of the Western Han Dynasty (206BC-24AD) and his queen, the Hanyangling Museum is built on the north bank of the Wei River as a museum occupying largest floor area among its congeners in China. The museum assembles rich cultural relics, modern scientific technologies, special service of simulated cultural relic excavating and pleasant garden landscapes, which make it an appealing tourist destination in Shaanxi Province.

It took as long as 28 years to build the 20-square-kilometer Hanyangling Mausoleum, from 153 BC to 126 BC. Emperor Hanjingdi, the owner of the Mausoleum, was the fourth monarch of the dynasty, who ruled the country for 17 years. During his reign, the dynasty reached another flourishing age after the heyday his father Emperor Hanwendi created, which are widely known as "The Rule of Wen and Jing (文景之治)" in Chinese history.

The excavation that has been lasting over 30 years shows that the whole cemetery is mainly made up of the tomb of Emperor Hanjingdi (the center), the tomb of the queen, the subordinate pits, the ceremonial site, the human sacrifice graveyard and the criminals' cemetery. 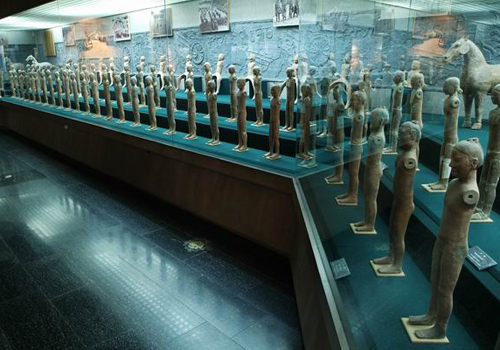 The subordinate pits scatter around the tomb of the emperor in an actinomorphic formation and a great number of lifelike statues of warriors and maidservants and animals have been unearthed from the subordinate pits; and over 10,000 tombs of the noble and the ministers were tidily arranged on both sides of the 110-meter-wide "sacred way", which stretches for about 5 km to the former "Yanglingyi" which was a city developed near the mausoleum.

The Luojing Stone Site located southeast of the tomb of the emperor has been surveyed to be a square (about 260 meters in each side) surrounded by a ditch. In the middle of the site there is a huge cubic stone, called "Luojing Stone" by the local, which probably functioned as a mark in the construction of the mausoleum. The strict layout and the large scale suggest that it was probably an ancestral temple or a very important ceremonial site.

The 80,000-square-meter graveyard of criminals 1.5 km northwest of the emperor's tomb was discovered at the beginning of 1970s. It has been estimated that more than 10,000 criminals were buried here. In 1972, 29 of that were excavated and 35 human skeletons with iron shackles were found to be put in a jumble. 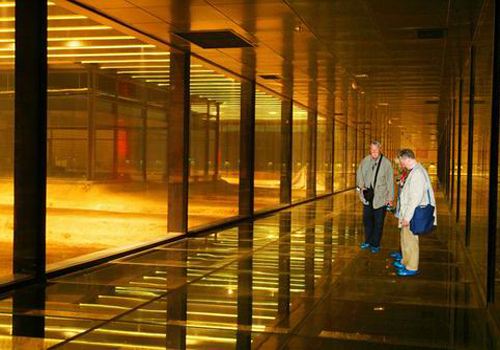 The underground exhibition hall is an important part of the Hanyangling Museum. It is the first completely underground one in the world constructed on historic relic by most advanced technologies. The glass walls in the hall separate the cultural objects from visitors and the different spaces are offered with diverse temperatures and humidities to ensure that the objects suffer from least destroy. Putting themselves in the exhibition hall, the mysterious environment and the phantom imaging show will make visitors feel like traveling through time. 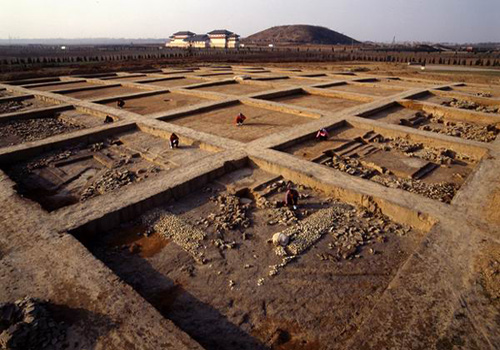 The ruin of Deyang Palace covering 60,000 square meters was an ancestral temple of the mausoleum. It was designed to be in a layout of several squares, which could compare favorably with its congeners in the capital city of the time. Today, part of the ruin has been recovered. 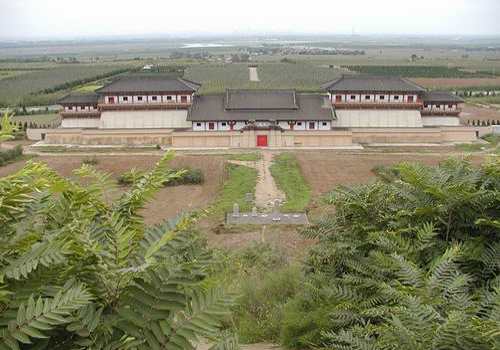 Made up of symmetrical architectural complex, the Nanque Gate or Zhuque Gate is the southern one of the four "city gates" of the mausoleum. The outside of the structure is in Han style and inside the 2000-square-meter exhibition hall the development and history of Chinese Quelou architecture are introduced systematically.