The pagoda was originally built to be five-storey in 652 AD (Tang Dynasty) in a bid to consecrate the Buddha figures, sariras and Sanskrit sutras that Master Xuanzang carried from India in the 7th century. In the following time after its completion, the pagoda was maintained and repaired for many times and had been a famous tourist site in Tang Dynasty. The Big Wild Goose Pagoda we see today is a seven-storey pavilion-styled building – two more storeys were added during the reign of Empress Wu Zetian of Tang Dynasty. 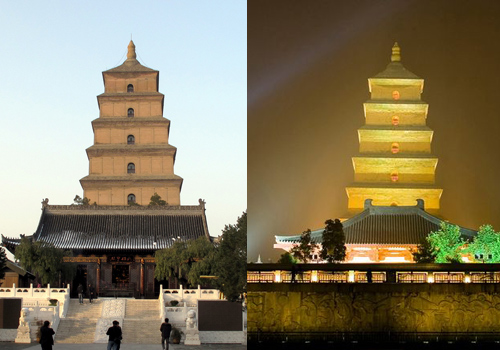 Seen as an architectural masterpiece of Buddhism of China, the Big Wild Goose Pagoda is also called Pagoda of Daci'en Temple because of its location inside the temple. There are wooden stairs inside the pagoda and one arched window at each of the four sides on every storey, where visitors can have a panorama of the surrounding. Many inscriptions in the pagoda can still be recognized till today.

As a well-known historic site and the landmark of the city, the Big Wild Goose Pagoda is drawn on the city emblem, welcoming innumerable domestic and international travelers to Xi'an. 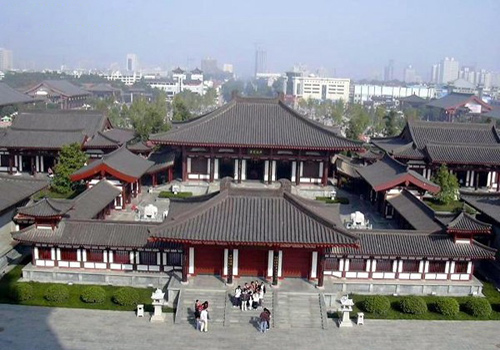 The construction of Daci'en Temple started in 648 AD (Tang Dynasty) ordered by the crown prince Li Zhi in memory of his mother Queen Wende. Being one of the four places where Buddhist sutras were translated during the dynasty, Xuanzang (602-664), a great Chinese Buddhist master who created the Chinese Buddhism, used to took charge of the affairs of the temple and the translation here, which made it a prominent Buddhist temple in China.

Born in Henan Province in 602 AD, Master Xuanzang got an exceptive admission from the Tang royal court at the age of 13. He received a tonsure ceremony at the Jingtu Temple in Luoyang and started his hard work in Buddhism there. In 627, Xuanzang and his fellows asked the emperor for a pilgrimage to India, but the emperor prohibited it because of the new founding of the dynasty. Others gave the idea up except Xuanzang, who still insisted on researching Buddhist sutras and Sanskrit. All of the work made good preparation for his travel from Chang'an (known as Xi'an today) to the "Western Regions (mainly refer to central and western Asia and Indian Peninsula)" since 629. 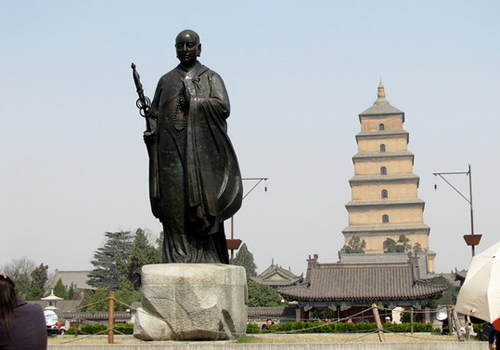 With all difficulties and hazards, Xuanzang went along the "Silk Road" alone and reached India finally after a long trudge of over 25,000 km in three years. As what he wished, he was allowed to study Buddhism at the famous Nalanda Temple and formally acknowledged Master Silabhadra as his teacher. After spending five years travelling around all states of India for Buddhism research, he made great accomplishment in Buddhist theory and got a high fame just second to his teacher. In 645, Xuanzang went back to Chang'an with 657 Buddhist sutras, 8 figures of Buddha and a large number of sariras. When the Daci'en Temple was completed in 649, Xuanzang became its first abbot and dedicated himself to translating the sutras. In 664, Xuanzang who worked hard for all of his life in Chinese Buddhism passed away at Yuhua Temple.

Located at the foot of the Big Wild Goose Pagoda, the Music Fountain Square of Big Wild Goose Pagoda covers 168,000 square meters, with the pagoda being the central axis from south to north. It is made up of music fountains, cultural square, garden landscapes, tourist and commercial facilities and is an important part of the Xi'an Cultural Area of Tang Dynasty. 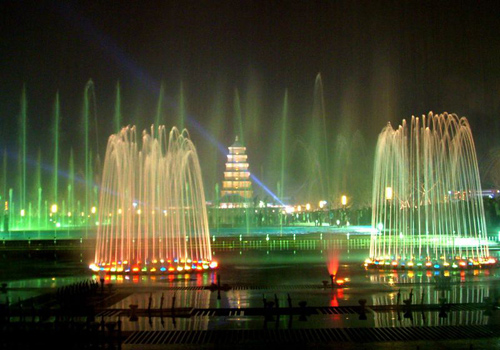 As the highlight of the square, the 1024 music fountains controlled by water pumps and transducers are set on the central axis of the northern square in a shape of "T". When the fountains work in the evening, the artificial streams flowing from the ground make the square a world of colorful water with the embellishment of all kinds of light sources.

No shows from November to January (except the Spring Festival). Please keep your articles such as camera from the water when watching the show.