The Banpo Museum located on the eastern bank of the Chanhe River of Xi'an is the first Chinese museum built on the remains of prehistorical matriarchal villages along the Yellow River. Being the largest component of Chinese Painted-Pottery Culture (aka Yangshao Civilization, about 6000 years ago, first found at Yangshao Village of Henan Province, hence the name), the remains were found in 1952 and the site was opened as a museum in 1958 after 3 years' excavation and construction.

From 1954 to 1957, 45 houses, 6 pottery-kiln sites, 250 tombs, over 200 cellars and pits, more than 10,000 pieces of production tools and articles for daily use, and grain and vegetable seeds were unearthed from the site. Of all the relics a ceramic basin with human face and fish painting (人面鱼纹盆) is the most precious one, ranked among first-grade national cultural relics. 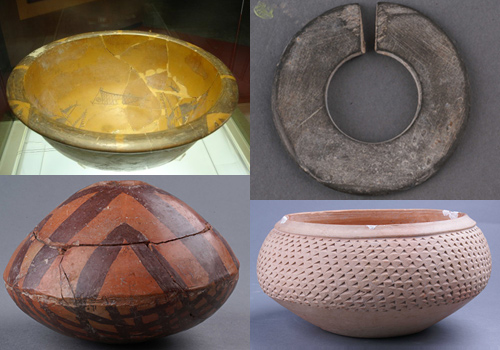 Scheduled to be replaced by a larger steel-structure shelter, the old one constructed in 1950s was dismantled in 2002, which offered an unexpected chance to discover a new sacrifice site centering around a stone pillar. The discovery contributed more information to the research and study of the prehistorical burial culture of China.

At present years, the museum has utilized modern electronic and virtual technical equipments to re-present the daily life with lifelike vision and audition. Also, visitors can feel the daily life of Banpo people at the Banpo Primitive Cultural Village and enjoy a leisurely time at the Peony Garden, which sit by the Preservation Hall of the museum. 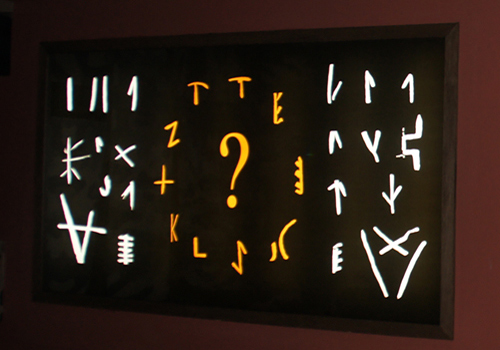 Many of these ceramic wares are bright and colorful and painted with vivid red or black patterns that could be closely connected to the daily life of that time, e.g. fish, deer, frogs, plants. Besides, there are also some triangles, checkered and woven patterns. Now in the exhibition hall the 22 cutting symbols discovered at the remain also can be seen, and some suppose they are primitive writings. 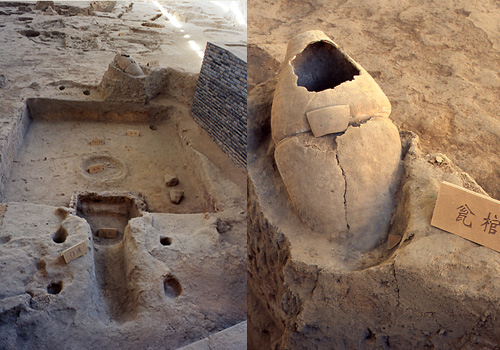 Covering some 3000 square meters, the Banpo Site is divided into residential area, graveyard, and ceramic making area. The site is in the shape of an irregular oval with the residential area in the center. The first houses at that time were constructed with a half underground and another half aboveground. The construction method of building a house on the ground with wooden support and wall was not created until the late primitive commune. Around the residential area there is a chasm (about 300 meters in length, 5 meters in depth, 6 meters in width), which is supposed to be a fortification for guarding against outside tribes and wild animals rather than a pond. Near the houses there are some cellars and hutch that were probably used for storage and rearing livestock.

The northern area by the chasm was a graveyard, on which there are some original coffins – ceramic urns covered with basins as well as ceramic wares and some other adornments. But strangely, almost every basin was chiseled with a small hole. It is suspected that the holes were the entrances and exits for the decedents' soul.

Of all the graves, two are distinguishing for their special funerary way – one with two men and the other with four women. People think it is the funerary custom of matriarchal clan society, however, the fact is still a puzzle. Dissimilarly, children were buried in the residential area with urn coffins. 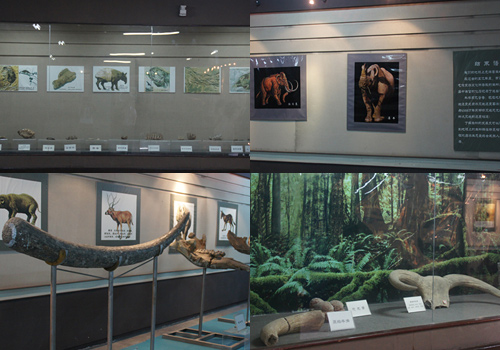