After Zhu Yuanzhang (1328-1398), the founder of Ming Dynasty (1368-1644), occupied the city of Huizhou, he was advised by a recluse named Zhu Sheng that "build indestructible city walls and hoard grains before declaring yourself emperor". At the age when the city gates were the only entrances of a city, city walls were undoubtedly the crucial defense points that feudalistic rulers focused on. Therefore, city walls were constructed nationally when the emperor unified the country. The circumvallation in Xi'an today was one of the achievements, which was built and expanded on the former imperial city of Tang Dynasty (618-907). 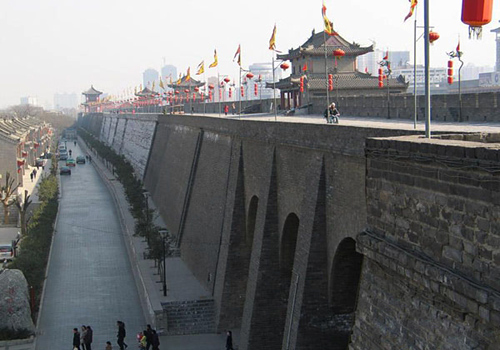 At the very beginning, the body of the Ancient City Wall in Xi'an was built with layered loess, and the base was tamped with the mixture of sticky rice juice, lime and earth. This simple but hard wall was not paved with black bricks until 1568. It was stable enough to allow solders to practice and chariot to run on it. The wall was increased to be 12 meters high, 12-14 and 15-18 meters width on the top and the bottom respectively. 98 observation towers in total were built every 120 meters extruding the city wall to defense enemies who climbed into the wall. 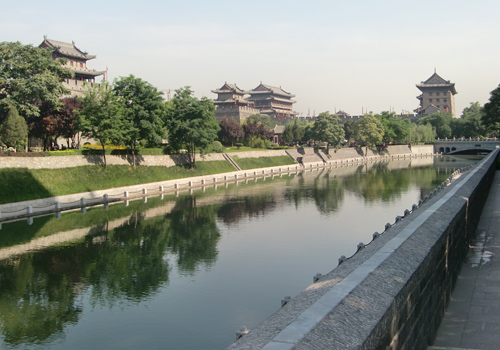 One water channel is equipped every 40-60 meters on the top of the Ancient City Wall as drainage, which plays an important part in keep the wall from destroy from flood. Along the wall encircles the wide and deep city moat, with a drawbridge on the front gate of the city which could be raised up and descended down at any time to ensure the security of the city.

The Ancient City Wall of Xi'an is a rigorous and integrated military defense system comprising city moat, drawbridge, various observation towers, battlements, turrets, parapets and crenels. Since constructed from Sui and Tang dynasties about 1400 years ago, the wall has experienced series of alteration and finalized the current layout, with the Changle Gate (East Gate), the Yongning Gate (South Gate), the Anding Gate (West Gate) and the Anyuan Gate (North Gate) being the four main city gates. 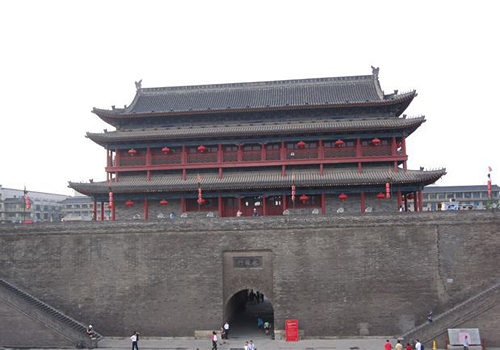 Built in 582 (Sui Dynasty), the gate is among the oldest gates of the Xi'an Ancient City Wall. As one of the three southern gates closed to east, it was originally named after Anshang Gate and designated to be the main south gate at the end of Tang Dynasty an finally got the current "Yongning Gate" in Ming Dynasty.

This gate is the main gate when Chang'an (Xi'an) was still the imperial city of Tang Dynasty, at the foot of which the most prosperous Zhuque Street at the time stretched. It was the place where emperors of Sui and Tang used to hold important national ceremonies. Closed at the end of Tang, it was not discovered inside the Ming city wall until 1985 when the repair work of the Xi'an Ancient City Wall was undertaken. This imperial gate is just as resplendent as it was described in historical records, with marble gate post carved with exquisite decorative patterns.

Dredged in 1939, Lesser South Gate is also called Wumu Gate in memory of Mr. Jing Wumu, a martyr in the Chinese Revolution of 1911.

Hanguang Gate was a southern gate closed to west when Chang'an (Xi'an) was the capital of Tang Dynasty. It was sealed after the Northern Song Dynasty and reappeared in 1984. This relic has been decided to be paved with bricks and equipped with artificial daylight and air-conditioning system for sightseeing. 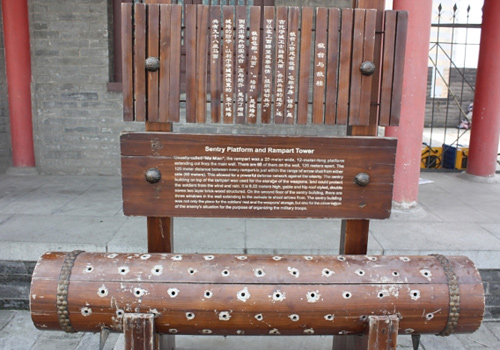 The West Gate was the central gate on the west side of the city wall. It was moved southward slightly when the city wall was expanded in Ming Dynasty, entitled Anding Gate.

The gate was named after General Feng Yuxiang, who rescued Xi'an from warlord's occupying the city. To mark the general's feat, hence the name in 1928 after the gate was opened.

The North Gate was completed in Ming Dynasty with the normal name of Anyuan Gate. The gate tower of this gate was burnt down in the Revolution of 1911 and was recovered 1983.

Located near the Xi'an Railway Station, the gate got its name in 1986 because of its facing the Shande Road of Xi'an City. 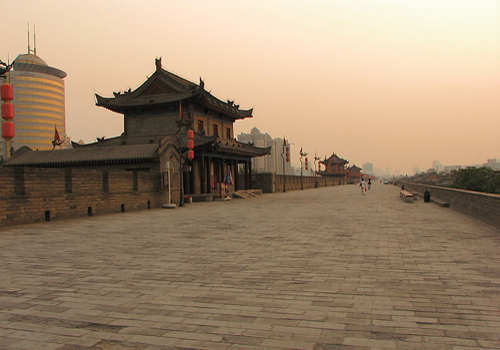 Zhongshan Gate was opened up at the beginning of 1927 under General Feng Yuxiang's proposal in honor of the famous Chinese revolutionary leader Sun Yat-sen ("Sun Zhongshan" in Chinese Pinyin). The gate has two side-gates named Eastward Expedition Gate and Triumphal Gate.

The East Gate (aka Changle Gate) was built at the same age and encountered from the same adversity as the North Gate at the middle of the 17th century. Afterwards, it was rebuilt in Qing Dynasty (1644-1911). Before the Xi'an Incident occurred in 1936, General Zhang Xueliang used to organize the training units and corps on the East Gate. Today it was repaired to be a memorial site of Xi'an Incident.

The gate was opened in 1986, named after the Jianguo Road it faces.

Heping Gate (or Peace Gate) sits on an axis from south to north with the Xi'an Railway Station and the Big Wild Goose Pagoda. To express the wish of world peace of Chinese people, hence the name. 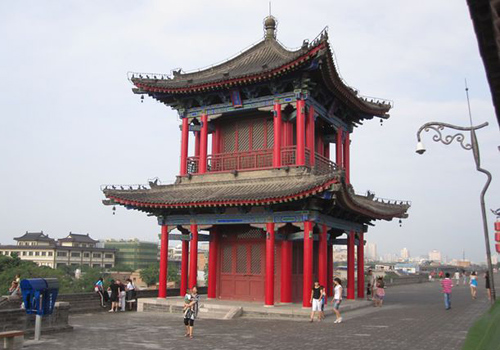 Located to the south of the Museum of Forest of Steles in Xi'an, the Wenchang Gate was opened in 1986. This gate distinguishes from others by the Kuixing Building on it, which is the only one on the Xi'an Ancient City Wall irrelevant to military defense. Kuixing or Kui Star is the star of wisdom in Chinese culture and a special building was usually built for it in Confucius temples and schools. In Ming and Qing, the Confucius temple and school of Xi'an were located by the Ancient City Wall (known as the Museum of Forest of Steles now), that is why the Kuixing Building was constructed on the wall.