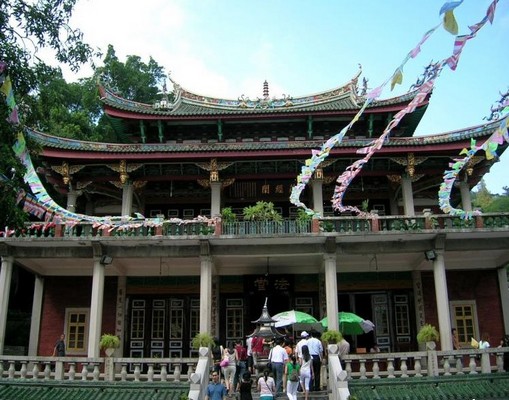 Upon your arrival in Xiamen you will be met by your guide. Then you will visit South Putuo Temple. Situated at the foot of Wulao Peak on the southern end of Xiamen it was first built during the Tang Dynasty (618-907). Later rebuilt during the Qing Dynasty (1644-1911), it is now an imposing multi-layered trapezoidal structure that overlooks the sea. The Shrine of Buddhist Scriptures houses a huge collection of Buddhist cultural relics, including a Burmese jade carving of the Buddha and many important Buddhist texts. The temple's Heavenly King Hall, the main prayer hall, the Hall of Great Compassion and the Shrine of Buddhist Scriptures are all graced with painted brackets and upturned eaves.

Then you will drive to imposing Huli Mountain Canon Platform (Huli Shan pao Tai). Originally built in the Qing dynasty (1644-1911) to fend off foreign imperialists, the platform boasts a huge nineteenth century heavy artillery piece produced by the German conglomerate Krupp, with a maximum range of 10,000 meters.

In the evening you will be transferred to your hotel to relax.

Transfer via: Flight on your arrangement
Sightseeing: Gulangyu Island

In the morning we will see Gulangyu Island, which is located just southwest of Xiamen City. Visitors can reach it by steamship from Xiamen City in about 5 minutes. Gulangyu Island is renowned for its delicate natural beauty, its ancient relics, and its varied architecture. The island is on China's list of National Scenic Spots and also ranks at the top of the list of the ten most-scenic areas in Fujian Province.

Then you will be transferred to the airport from where you will take the flight to your next destination.