Yongding Tulou, located in Longyan city, Fujian province, is unique rural dwellings of the Hakka and Minnan people in mountainous areas around the world. It is a gem in architecture of ancient China because of its long history, distinct styles, magnificent scale and exquisite structure. In terms of history, aesthetics, and science, Yongding Tulou is highly commended as the ancient castle of the orient. Generally speaking, Tulou is divided into two sorts, the rectangular and the circular. Nowadays, there are about 360 well-reputed circular Tulou and more than 4000 circular ones. 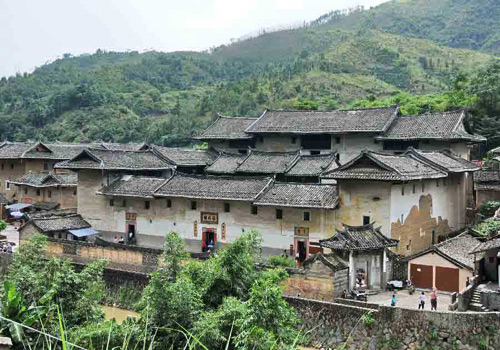 Tulou, where the Hakka and Minnan people live, has its walls made of sticky rice, lime, egg white, and clay while the inside is of yellowwood and China fir, which prevents searing hot and mind-numb cold from hitting the residence. Besides, temperature is automatically regulated.  Yongding Tulou had always been the fortification of the Hakka before the liberation in 1949 in that it is no less impregnable than those armored concrete buildings. The door is made of nailed ten-centimetre-thick woods. Some doors are even equipped with trough in case of fire. Commonly, those circular Tulou have windows shut at the first and second storeies so as to ventilate the rooms and snipe intruders. On the top, the observation tower makes it convenient for the residents to grasp the enemies’ situation. 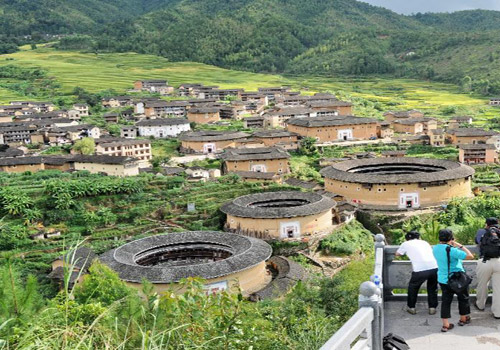 When it comes to the paradigm of the dwellings of the Hakka, the circular Tulou can never be omitted. They are usually composed of two or three circles, one close to another. The outer circle is ten metres or so, with three to four storeies, one hundred to two hundred living quarters on the peripheral. The lowest storey serves as kitchens and dining rooms; the second storey is used as warehouses; the other storeies are for living rooms. The second circle is two-storey high with thirty to fifty rooms. At the centre is a courtyard where weddings and funerals are held. Such amenities as well, bathroom and mill are available.

Fujian Tulou is the unique and creative rammed earth dwellings in mountainous areas, the masterpiece of immature soil architecture. Tulou came into being in the Song Dynasty (960-1127) and Yuan Dynasty (1271-1368), and late Ming Dynasty, Qing Dynasty and the Republic of China were its heyday. Chuxi Earthen Building Cluster enjoys both the oldest and the youngest Tulou – Jiqing Tulou is as old as six hundred years while the Shanqing Tulou only has a history of thirty years. 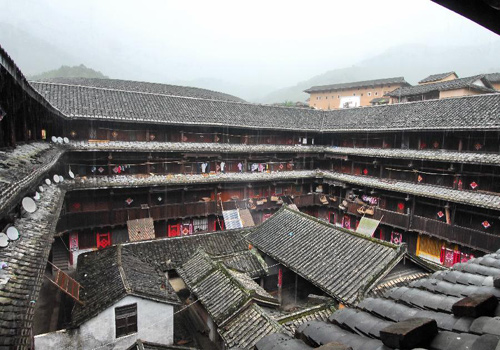 As a matter of fact, the formation of Tulou has something to do with the migration of the Han of Central Plain. In 400 A.D, wars and disasters engulfed the northern country, leaving the locals immigrating to the south. With the integrating of the immigrants and the dwellers in south Fujian, a group of people began to speak Minnan language. Those who settled down in mountainous area of west Fujian by way of Ganzhou, Jiangxi province, however, started speaking Hakka. And Tulou is just standing on the junction of the Minnan-speaking area and Hakka-speaking area, where conditions were tough, bandits were rampant. More important, it is deep-rooted concept of living a social life that urged people to find a way of warding off intruders, thus an ingenious layout of Tulou coming into being.

Not only is Tulou multifunctional, but also is symbolic of harmonious life. As a colorful society in miniature, Tulou witnesses people helping one another every day and getting along with each other. Whenever you are paying a visit here, the rich history and profound tradition strike you all the time; moreover, the ideal of cultivating one’s moral character and putting one’s family affairs in order and the pursuit of arriving at supreme goodness will arouse your emotion. On 6th July, 2008, Fujian Tulou was inscribed as World Heritage Site by UNESCO.