Built in 1953, Hubei Provincial Museum was one of the eight national museums established by both central and local governments. Now Hubei Provincial Museum is the only comprehensive museum in Hubei province. The museum has collected over 200,000 cultural relics, including pottery, porcelain, jades, bronze wares, lacquer wares, ancient weapons, ancient musical instruments, ancient coins, ancient calligraphy and paintings, etc. Among these cultural relics, 812 are listed as first-class relics of China, and 16 are considered as national treasures. In the museum, there is also the largest exhibition hall of the ancient musical instruments in China. 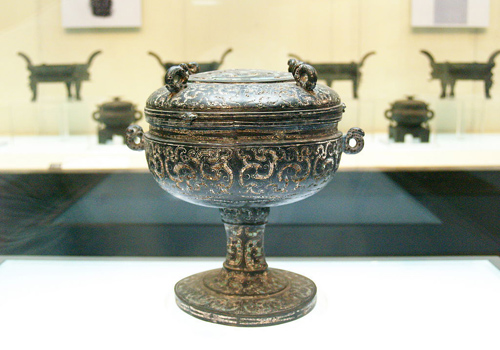 The overall layout of Hubei Provincial Museum reflects the construction model and characteristics of Chu State (a state in the Spring and Autumn Period (770BC-476BC)). The outdoor environment creates a kind of historical and cultural atmosphere in accord with the main buildings of the museum, offering a quiet and comfortable travel to the tourists.

There are also antique stores in the museum. After you visit the two exhibition halls, you can buy some souvenirs if you like. 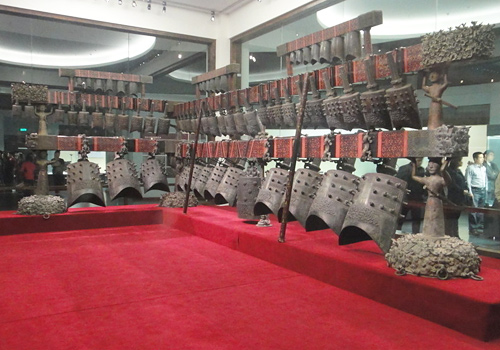 2. The Chu Culture Exhibition Hall features the regional culture of the Chu State. Most of the cultural relics displayed here are bronze vessels, lacquer works, bamboo and wooden artifacts, and silk knitted products. In 2002, archaeologists discovered pieces of chariots and horses of the Chu State. After careful restoration, some of the chariots and horses are now displayed in this hall. In addition to the unearthed cultural relics, some restored models of the houses in which Chu people lived are shown to the visitors to give them more direct impression of the ancient Chu people's lives.

3. The Comprehensive Exhibition is still under construction at the present time.

1. The bronze sword of Goujian (the king of Yue State in the Spring and Autumn Period).
This bronze sword was made in the late Spring and Autumn Period. It is about 55.7 centimeters long and is formed by many little dark cells. The sword has kept stainless for thousands of years and the blade is still thin but sharp. It is said that this sword can scratch down twenty-one pieces of paper for one cut. 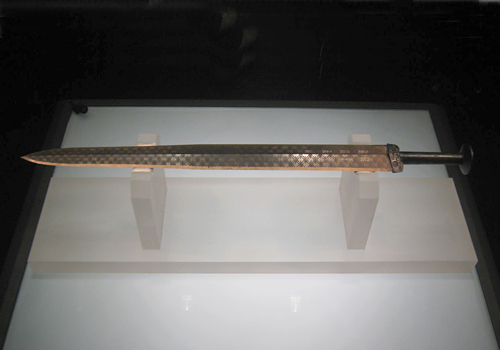 3. The Chime Bells from the tomb of Yi (the king of the Zeng State in the Warring States Period (476BC-221BC))
The whole set of this Chime Bells contains sixty-five bells with different sizes, so it can play various tones of the musical scale. This set of Chime Bells is the largest bronze musical instrument ever discovered. There are about 3,000 ancient Chinese characters on the bells, describing the music and the owner of this instrument.

4. Blue-and-white vase of four-favors figures of Yuan Dynasty (1206-1368)
On the vase, there are four traditional Chinese paintings, i.e. Wang Xizhi’s favor orchid, Tao Yuanming’s favor chrysanthemum, Zhou Dunyi’s favor lotus and Lin Hejing’s favors plum blossom and crane (all these four persons were famous Poets in Chinese history). This vase was found in the tomb of Zhu Yuanzhang’s son (Zhu was the first emperor of Ming Dynasty) and it is a rare element because of its bright colors.

In addition to the four greatest treasures in the museum, there are also some other permanent exhibitions.

1. The History of Writing: exhibits the writing bamboo slips and writing tools in Qin (221BC-206BC) and Han Dynasties (202BC-220AD), giving the visitors a direct visual experience of "ancient books" of Chinese ancestors.

2. The Art of Earth and Fire: aims to introduce the development of porcelain in Hubei Province, most of these cultural relics are firstly presented to the public.