Travel tips: the visiting route is single and only forward in Karez Well System, so it is impossible to go backward to take some missing photos or watch some missing details.

Well known as well as the grapes in Turpan, Karez Well System was once the main source of water for both field irrigation and daily life in ancient times. Even to this day, it continues to play a vital part in local social economic life in Turpan. Initiated about 2000 years ago in Han Dynasty (202B.C.-220A.D.), most of the present qanats of Karez Well System were built in Qing Dynasty (1644-1911). 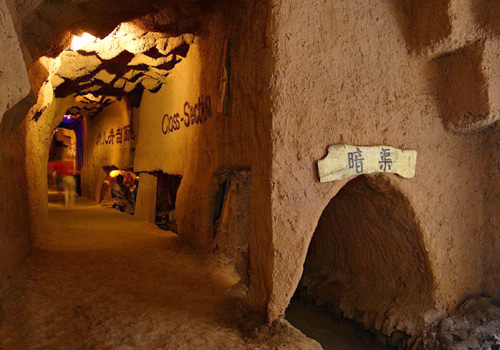 Known as one of the great 3 constructions of China’s ancient times (the other two are the Great Wall and the Beijing-Hangzhou Grand Canal), Karez Well System is made up of about 1000 qanats, if put together they measure 5000km, that is longer than the distance between New York and California (3691km). These qanats provide water for the local region, and therefore have always been an important part of there society and culture. Today one of the main qanats is not only a source of water but a tourist attraction, and has become a Protected Area of the People’s Republic of China.

A qanat is a well like water distribution system that delivers large quantities of water with ease. For the most part, qanats are made in dry arid climates, at the foot of mountains were underground water is closer to the surface. An underground canal is made at a slight angle so the water flows naturally due to gravity, this way there is no need for pumps, along the canal from above there can be many wells, the water flows into a slightly higher leveled aquifer. 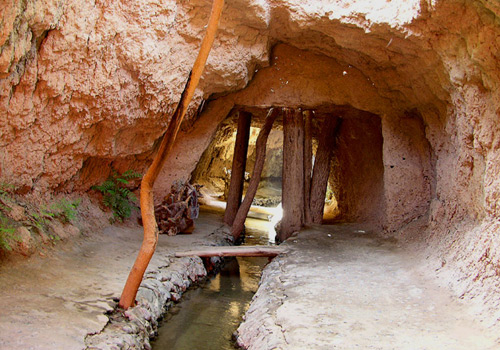 As a matter of fact, the Karez Well of Turpan is not only a "well", but a manmade underground river, which can reduce evaporation and retain water to resolve the water shortage in the area due to the dry weather and scant rainfall. The system is consisting of a vertical well, a closed conduit underground, an open channel on the earth’s surface and a flood dam (a small reservoir). And this ingenious design of the Karez Well System makes it easy to introduce the rich underflow water to the ground by channels.