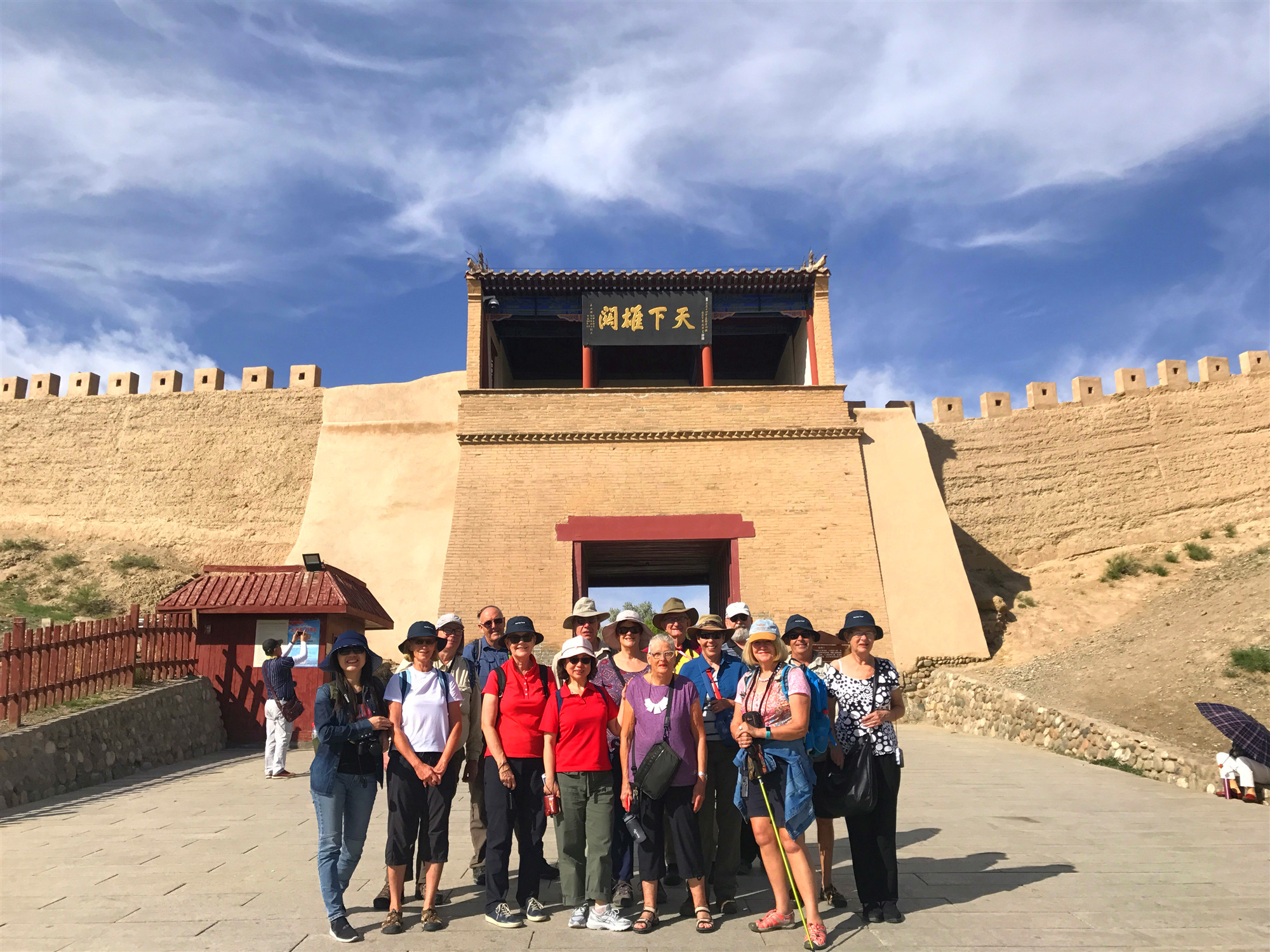 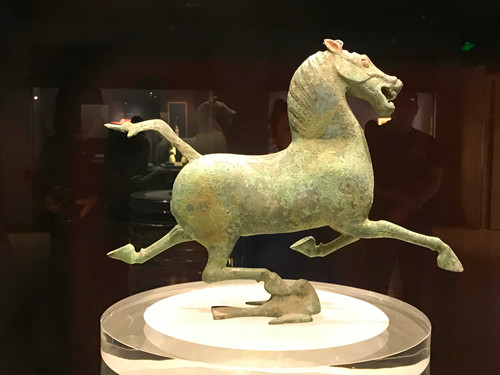 Transfer via: by air- on your own arrangement

Program: Upon arrival in Lanzhou, you will be met at airport and transferred to hotel for check-in. Free at leisure for the rest of the day. 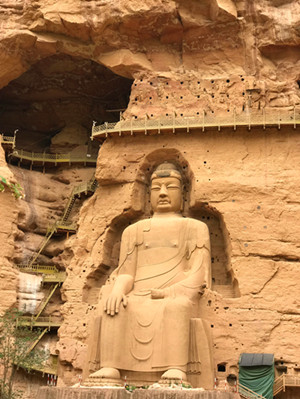 - Liujia Gorge: located on the Yellow River, it is a key water conservancy project completed in 1974, for the purposes of irrigation, navigation, flood control, electric energy production, and aquatic resources utilization.

- Bingling Temple: also called Bingling Temple Caves, it is one of the very noted four caves in China, the second important after Mogao Caves in respect of artistic value.

Transfer via: Xiahe to Lanzhou by private vehicle- arranged by us; 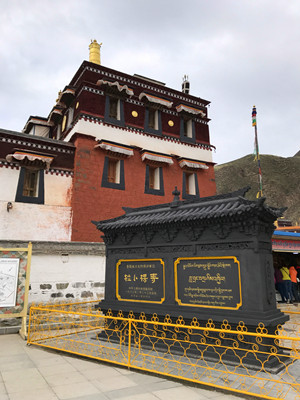 Lanzhou to Zhangye by bullet train (about 3.5 hrs)-second class soft seat arranged by us

Program: Drive back to Lanzhou, then take bullet train to Zhangye. Arrive in Zhangye, be met and transferred to hotel.

- Giant Buddha Temple: it is well known for the remains of China's biggest indoor sculpture of Nirvana Buddha.

- Mati Temple: The scenic area consists of several caves, which located inside sheer rock cliffs and with wooden pavilions clinging miraculously to the rock. 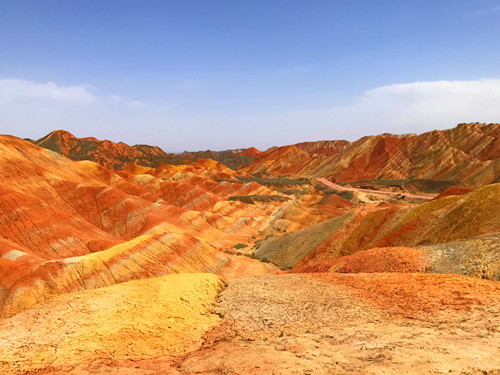 - Zhangye Danxia National Geological Park in Gansu is the best representative of China's colorful Danxia landform and the largest Danxia landscape in an arid area, with a wide variety of landforms.

Program: This morning you will visit Jiayuguan Fort, Great Wall Museum and Overhanging Great Wall, and then you 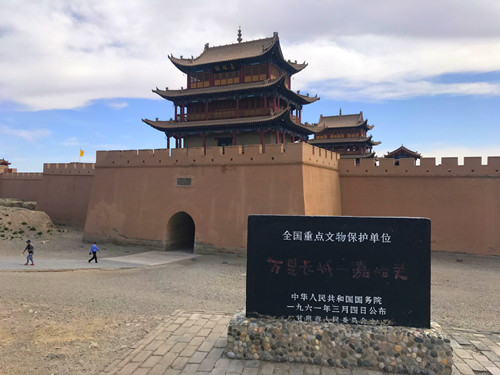 will be driven to Dunhuang (about 380KM, 5 hours driving).

- Jiayuguan Fort: It is the west end of the Great Wall of the Ming Dynasty, and the first mountain pass of the west Yellow River.

- Overhanging Great Wall: as an important part of ancient military defense system of Jiayuguan, it is named for its position on the mountain ridge of 45 degrees. 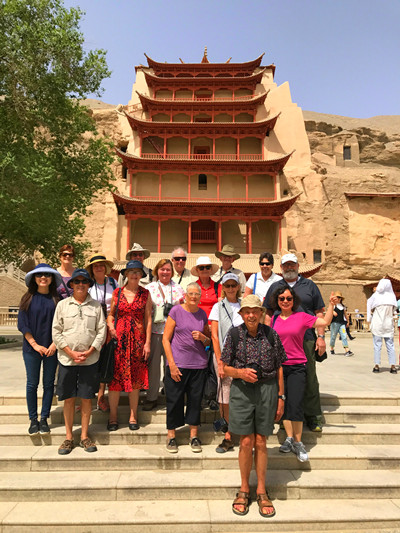 - Echoing Sand Dune: When there is wild wind, the sands will be blown up and make loud sound, like being produced by some ancient musical instrument when blew by breeze, hence the name.

- The Crescent Lake: Just like its name indicates, the lake is in a natural shape of half-moon and had been commonly considered as one of the Eight Great Landscapes of Dunhuang.

Program: Today you will visit Yangguan Pass and Yangguan Museum.

- Yangguan Pass: it is an important part of the Silk Road, a key place to the transportation between ancient China 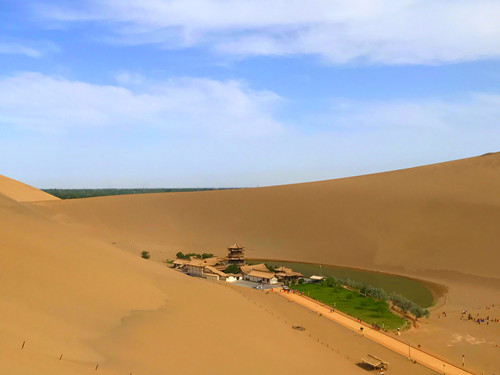 Transfer via: bullet train (about 3 hrs 40 minutes)-second class soft seat arranged by us 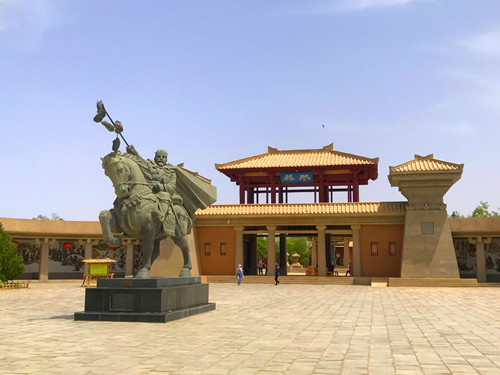 - Ancient City of Jiaohe: one of the world's largest, oldest historic sites and the best preserved raw soil buildings with more than 2,000 years.

-Karez Well System: was once the main source of water for both field irrigation and daily life in ancient times.

- Emin Minaret: More than 240 years have gone by since it was established in 1777, it is the largest Islamic tower in Xinjiang Uygur Autonomous Region. 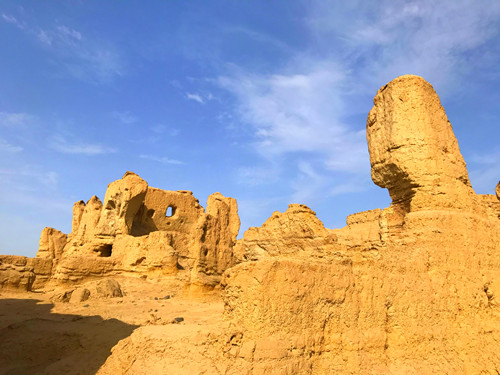 Program: Today you will visit Ancient City of Gaochang, Bizaklik Thousand Buddha Caves, have a distant view of Flaming Mountain on tour vehicle, and in the afternoon visit Tuyugou Valley.

- Ancient City of Gaochang: known as the largest site of ancient city in China western region so far, it was served as the capital of Gaochang Kingdom (460-640) in the ancient time.

- Bizaklik Thousand Buddha Caves: as one of the most important Buddhism grotto sites, it has the largest carved grotto and the richest content of mural paintings in Xinjiang Uygur Autonomous Region.

- Tuyugou Valley: it is a desert oasis seldom visited by tourists, known for its fantastic rock peaks, seedless grapes, and Buddhist meditation caves dating back to the 3rd century A.D. 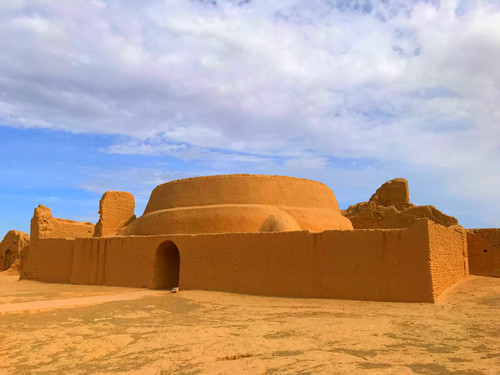 Program: After breakfast you will be driven to Korla (about 7 hours driving), upon arrival you will be transferred to visit the Tiemen Pass.

Program: You will be driven to Kucha (4-5 hours driving), once arrive there you will visit the Grand Kucha Mosque and Subashi Ancient City Ruins. 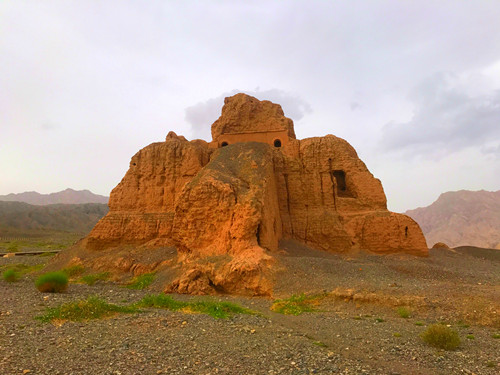 -Grand Kucha Mosque: initially built in the 16th century, it is the second largest mosque in Xinjiang, only after the Etigar Mosque in Kashgar, and it has capacity for 3,000 worshipers.

-Subashi Ancient City Ruins: actually should be called Subashi Temple Ruins, it is the largest ruins of Buddhist culture existing in Xinjiang. As a typical example of earthen ruins in arid region of northwest China even the Central Asia, it still reflects the temple's past brilliance. 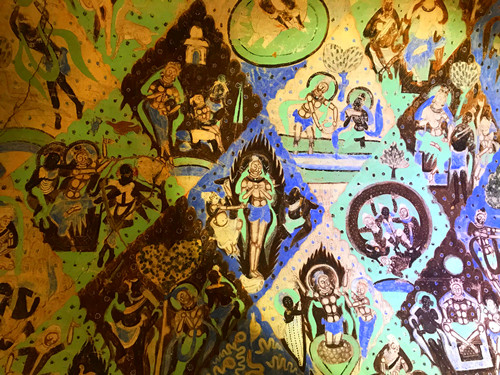 -Kizil Thousand-Buddha Caves: initially built in the 3rd century and located on cliff of Mingwutage Mountain, it is the oldest one among the Four Grottoes in China. There are 236 grottoes had been numbered, except some statues were damaged badly, many architectures and murals are well preserved till now.

- Tianshan Grand Canyon: Situated in the southern foot of Tianshan Mountain, it stands 1,600 meters above sea level, with its highest peak reaching 2,048 meters, is made up of ranges of rufous massifs.

Program: After breakfast you will visit Kucha Palace, and then you will be driven to Alaer along the new desert road (6-7 hours driving).

(Note: Alaer Yindu Hotel is the only hotel generally used by foreign customers in the city, its facilities and services are not as good as other hotels during the tour) 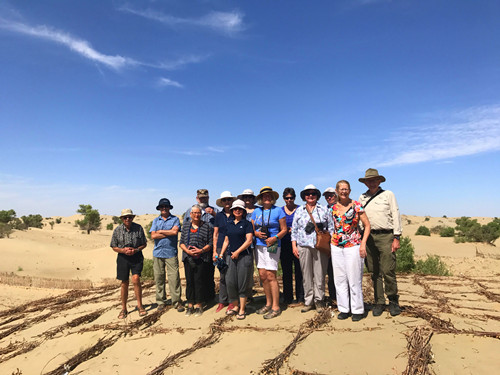 Program: Today go ahead driving along the new desert road to Hotan, you will pass the Taklamakan Desert and enjoy the spectacle view of Tarim River flowing through the desert. Arrive in Hotan, you will check in the hotel and have a rest.

-Taklamakan Desert: with a length of 1000km from the west to east and a width of 400km from the north to south, the desert covers an area of 337.6 thousand square km. It is the largest desert in China and the second largest shifting desert in the world. Here you will pass through the desert highway which is boundless like sea. 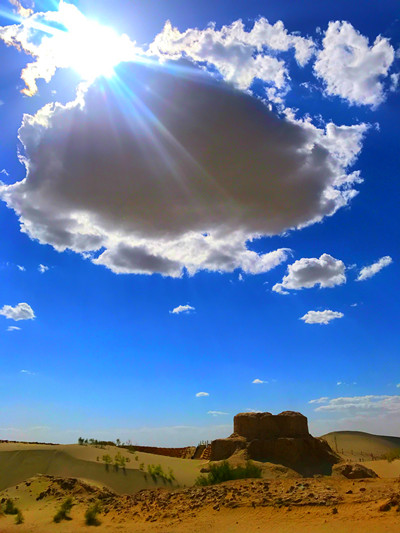 -Ruins of Rawak Temple: located in the north of desert, it is the only temple which has a gandara style (similar form as an Indian temple) which is quite well preserved. The Uygur word "rawak" means "pavilion”. This Buddhist temple was ever in the center of a group of Buddhist pagodas.

Program: After early breakfast in hotel, you will be driven to Kashgar. The driving time today is about 11-12 hours, and on the way you will visit the King of Yarkan’s Tomb.

-King of Yarkan`s Tomb: also called the Tomb of the King of Shache. Firstly built in 1533, the tomb covers an area of 1050 square meters, though it had been damaged over the past hundreds of years, the wall decoration and the structure are in good shape. 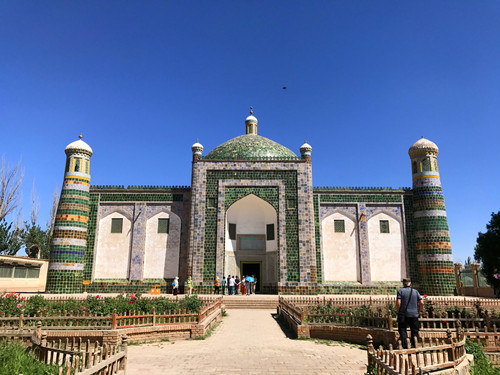 -The Idgar Mosque: it is the largest mosque in Xinjiang, and has a history of over 500 years. The whole mosque is over 140 meters in length and 120 meters in width. Light green is the featured color of the gate, elaborate carvings are everywhere on the gate, representing classic Islamic characteristics.

-Abakh Khoja Tomb: covering an area of 2 hectares, it is a typical Islamic architecture with five generations and 72 members of the same family buried in it. 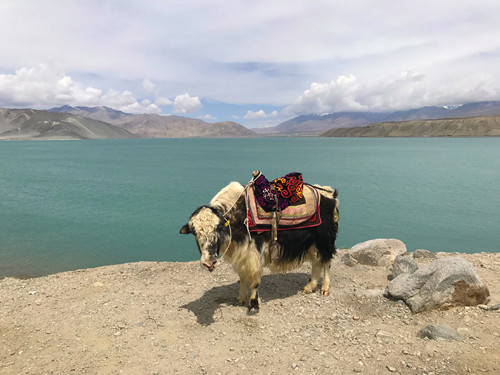 Program: After early breakfast in hotel, you will be driven to Taxkorgan. The driving time today is about 9-10 hours, and on the way you will visit the Kalakuli Lake. Arrive at the hotel in Tajik Autonomous County of Taxkorgan at night.

- Kalakuli Lake: located at the foot of Muztaga Peak, it is about 191 kilometers from Kashgar City. Covering an area of 10 square kilometers, Karakuri Lake is about 30 meters deep with an altitude of 3,600 meters which is an alpine glacial erosion lake famous for its reflection of snow mountains around. 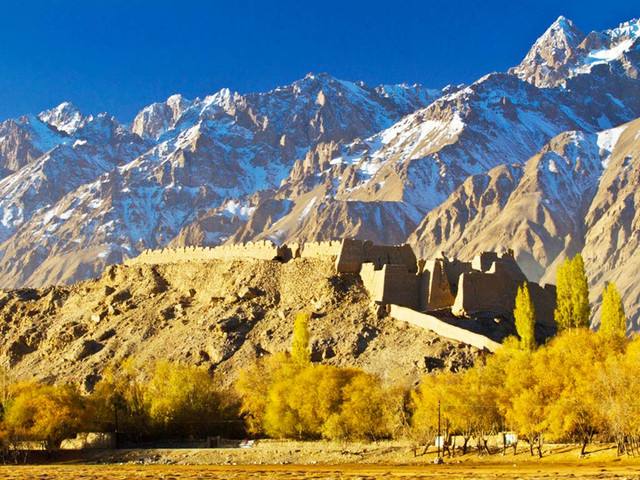 Program: Today you will visit the Stone City and the Golden Grass Land scenic area. Then you will be driven back to Kashgar.

Transfer via: by air- arranged by us

Program: You will be driven to airport and take morning flight to Urumqi, upon arrival you will be picked up and be transferred to visit Xinjiang Autonomous Region Museum (close on each Monday), and the International Bazzar.

- Xinjiang Autonomous Region Museum: It was officially opened in 1959 and reconstructed in 2005 with a total area of 17,228 square meters. The exhibition hall houses more than 40,000 precious cultural relics and specimens, national relics, revolution relics. 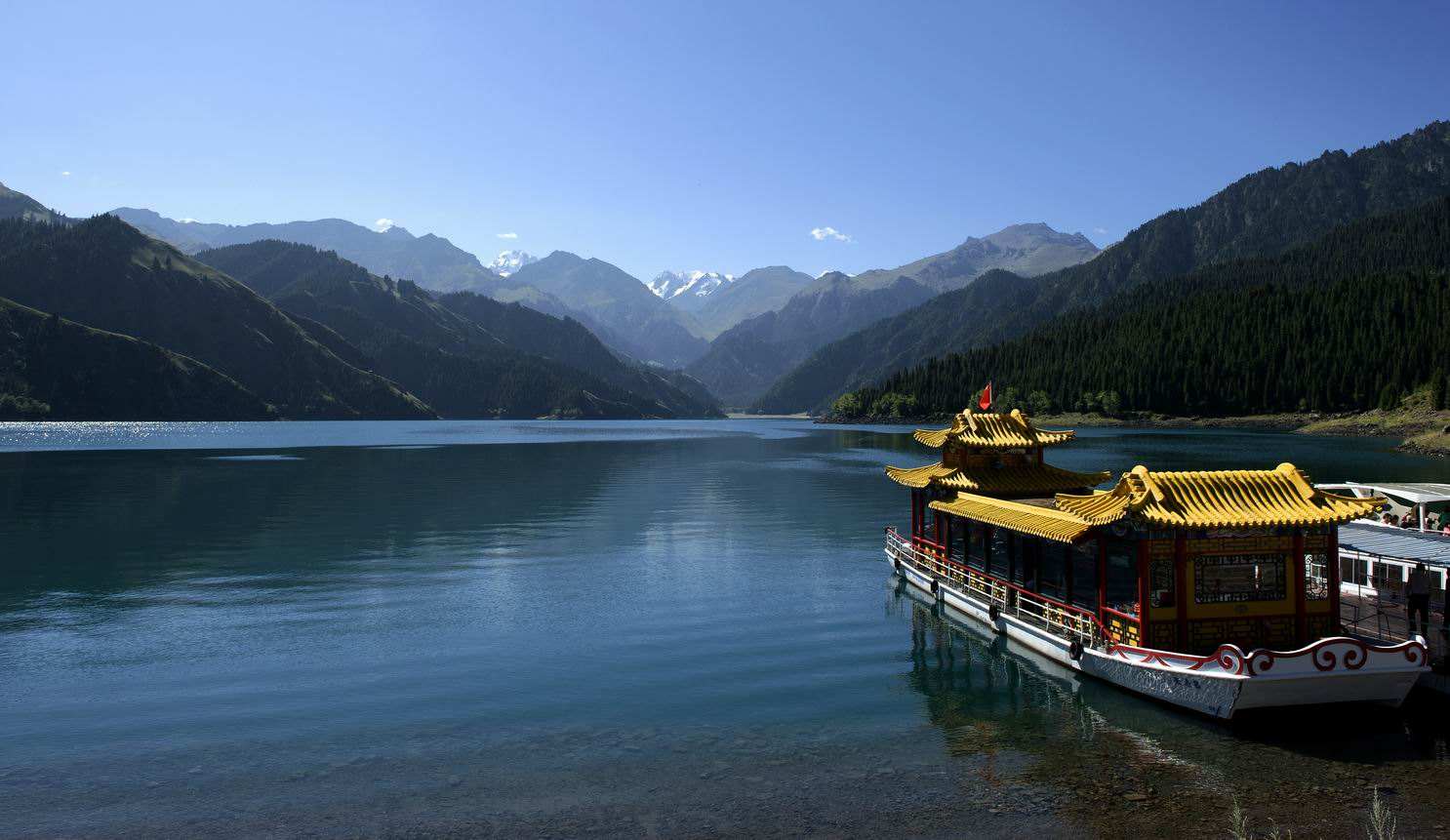 Transfer via: by air- on your own arrangement

Program: Free at leisure until be transferred to airport for your flight departure.