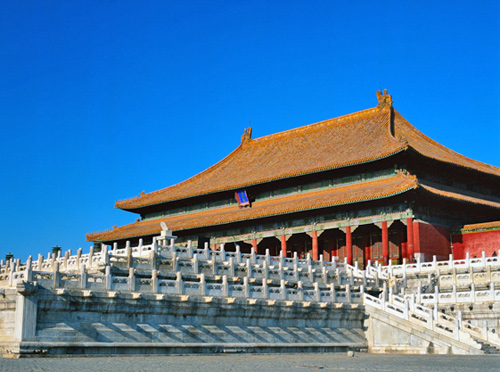 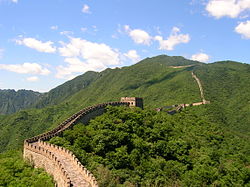 After experiencing the royal lifestyle, today we will be transferred to the surrounding countryside of Beijing and visit the Badaling Great Wall, the pride of China and one of the Seven Wonders of the World. Whereas Genghis Khan contemplated it as a military obstacle, Richard Nixon described it as one of humankind's greatest achievements. You will be able to climb and walk one of the best preserved sections of the 2,000 years old ancient wall, admiring the splendid mountain views. Bring a jacket and layer - although it is breezy, the climbing is tough. So be in a good shape! 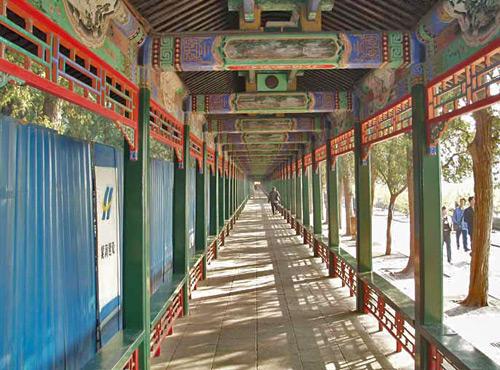 After having lunch at a local restaurant, you can spend the whole afternoon to visit the famous royal garden-Summer Palace. In 1888, the notorious Empress Cixi used the money intended for the Chinese Navy to build this opulent summer retreat for herself. Have a lakeside cruise on the lovely Kunming Lake and enjoy the magical views of the temples, pavilions and covered corridors around. Late in the evening you will be transferred to the railway station for your overnight train to Xi'an. 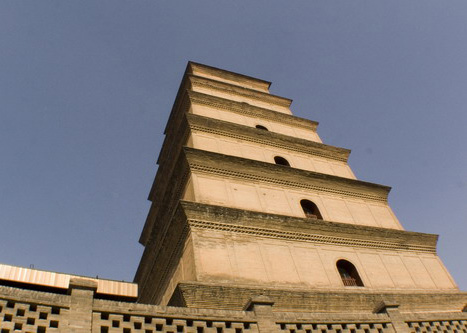 This morning you will arrive in Xi'an, one of the most important cities in China's history. Being the first stop on the Silk Road, Xi'an was the first Chinese city which opened up its doors to the Ancient world since Tang dynasty. You will be met at the railway station and then visit the Ancient City Wall. You will experience a half-hour's hike along the Ancient City Wall. It is the largest and best preserved present city wall in ancient China and is probably the best military battlement in the world. If you want to, you can rent a bicycle for a ride on top of the spectacular city wall. The wall was built in the Tang dynasty (618 -907) and enlarged in the Ming dynasty (1368-1644).

Our last stop today will be the Big Wild Goose Pagoda. Situated in the south of Xi'an city, it is one of the main constructions in the famous Buddhist temple-Da-Ci-En Temple. There, the well-known Buddhist Master Xuanzang (Monk Tripitaka) stored his collection of classic Buddhist artifacts brought from India in Tang Dynasty. Now it is the Landmark of Xi'an. 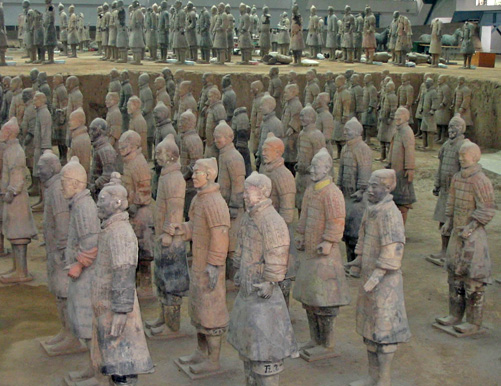 Today you will experience the highlights of Xi'an. After breakfast you will depart from your hotel and visit the amazing 2000-year-old Terra-cotta Warriors and Horses. Regarded as the "8 th Wonder of the World", the Terra-cotta Warriors and Horses are the most significant archeological excavations of the 20th century. Over 2,200 years ago, the first emperor of China, Qin Shi Huang, ordered the construction of a vast army of Terra-cotta warriors in search of immortality. After his early death they were buried with him to protect his empire. More than 7000 vivid figures in full battle array are formed for battle in several large pits.

After lunch at a local restaurant, we will visit Huaqing Hot Springs. The Tang Emperor Xuanzong used to spend his wintertime in company of his favorite concubine Yang Guifei here. Entering the West Gate of Huaqing Hot Springs, you will see the delightful gardens of Nine-Dragon Pool, the Lotus Flower Pool and the Frost Drifting Hall with Tang style. 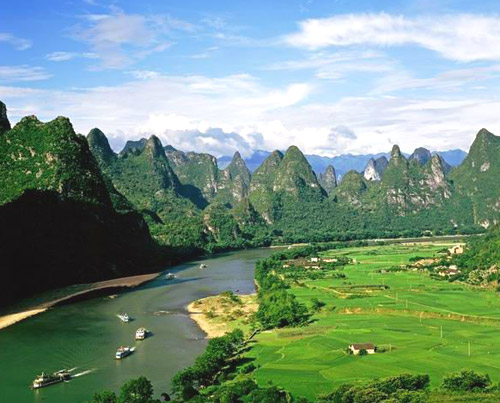 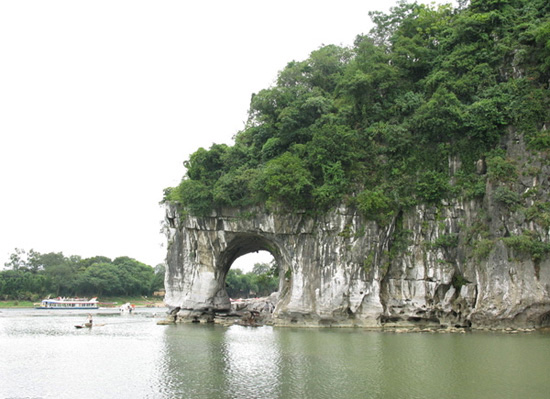 This morning we will drive back to Guilin. Start off with visiting the Reed Flute Cave, which is a vast and very impressive cave system. Known as "the Palace of Natural Arts" where you can see beautiful stalactites & stalagmites, it is one of the most famous attractions of Guilin.

Later we'll head for Fubo Hill. There, you can see lots of rock stone carvings & Buddha statues from Tang Dynasty. If you climb to the summit, you will have a wonderful bird's-eye view on Guilin city.

We will continue our tour and visit Elephant Trunk Hill. Located at the conjunction of the Li River & the Peach Blossom River, the hill looks very much like a giant elephant with a long trunk drinking out of the river; it is the symbol of Guilin city.

After the tours, you will be transferred to railway station to take overnight train for Guangzhou. 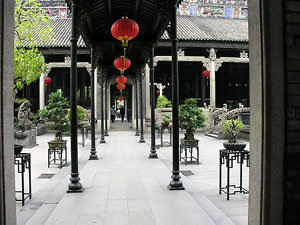 Upon your arrival at the airport you will be met by your local guide. Then you will start your sightseeing tour by visiting Sun Yat-sen Memorial Hall. It is a magnificent building in the shape of octagon and an important place for large scale meeting and performance. Sun Yat-sen Memorial Hall was built in order to commemorate the contributions of Sun Zhongshan, the great predecessor of Chinese revolution for democracy. It is a memorial construction donated by the people in Guangzhou and the overseas Chinese and is listed as one of the first class cultural relics in Guangdong Province. 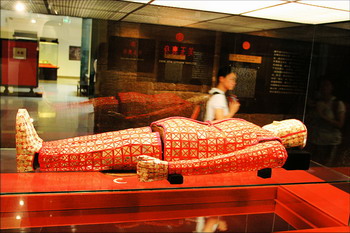 In the morning we will start off to Yuexiu Park, the biggest comprehensive sight-seeing park. Yuexiu Park consists of seven hummocks and three artificial lakes. Yuexiu Park is well-known for beautiful hills and waters and plenty of antiques which you can enjoy at ease in the park. There are verdant grasses and trees, birds' singing, and fragrant flowers all through the year. Travelers will lose themselves in the elaborately engraved and Linnan-styled pavilions, platforms, towers, and corridors; and the rippling water of the lakes.

Then you will head to the Temple of Six Banyan Trees. It has a long history in Guangzhou and is an ancient monastery famous at home and abroad. There are majestic towers, dense trees, plenty of antiques and valuable heritage from those famous people in the history. It is one of the four Buddhism temple complexes in Guangzhou is an important unit for the preservation of antiques.

Finally you will visit Western Han Nanyue King Tomb Museum, which is the oldest and largest Han tomb with the most funerary objects in Lingnan (South of the Nanling Mountain) Area. As one of the 80 famous museums in the world, the museum covers 14,000 square meters (150, 699.6 square feet) with 10 exhibition halls. 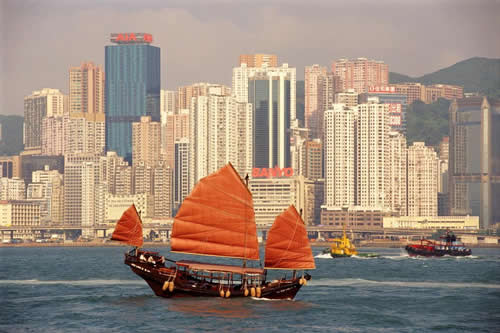 The tour will continue with a visit to Aberdeen fishing village where you will enjoy a Sampan Ride on the harbor to get a close-up look at this unusual way of life.