Travel tips:
Highlights of the Bund: Crowned as A World Architecture Museum, some 52 buildings of different styles such as Gothic, Romanesque, Baroque, combined style of Chinese and western, etc. and built in different times are just erecting there for admiring.
Features of the Bund in different time during a day:
- If visit in the daytime, to have a close-up view of the achitectures in Bund;
- If visit in the evening, especially during weekends and holidays when all the lights are shinning, it is the time to enjoy the magnificant nightscape of crowded but rather prosperous Bund. If wish a peaceful appreciation for the night view of Pudong District on the other side of the river, the Seagull Hotel beside the Waibai Transfer Bridge is the best viewing site;
- If visit late at night, it is the time to feel the peace of the Bund and Huangpu River accompanied by the ship whistles and the sweet lovers along the bank.
To get to Pudong District on the opposite bank from the Bund,
- By ferryboat, embark at the Huangpu River Tourist Wharf in Jinling East Road; inversely, embark at the wharf in Dongchang Road of Pudong Distric back to the Bund;
- By the Bund Sightseeing Tunnel between the Bund and Oriental Pearl; it only cost 3 to 5 minutes. 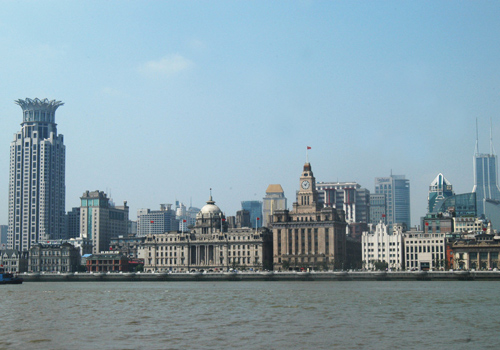 Originally a pathway stepped by boatmen and hard laborers at the west bank of Huangpu River, the Bund of Shanghai today is the most recognized symbol and proud of the city. The Bund is an Anglo-Indian word for the embankment of a muddy waterfront, what is just the beginning of the Bund. When the first British company was built there in 1846, the flourishing of the Bund Begun. For a century, it became a mark for the modern Shanghai, while to the Europeans, it was also the Wall Street in the east, where is the prosperous trading, fortunes made and lost.

Hailed as the world architecture museum, dozens of buildings standing on the Bund have witnessed the historical development of the Bund as well as the city. Most of the buildings were reconstructed or repaired, but styles remain. Though they were built in various styles and in different times, they are harmony in the hue, simply making an impressive spectacle. The neo-modern style, baroque of Anglicism, Italian, Frenchy and Spanish, eclecticism and neo-baroque, Indian colonnade, American design and green vault tops are all the distinct examples in the field of architecture. 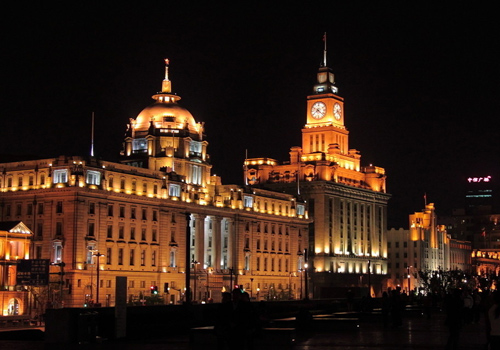 Owing to its preferable location and its influences on Shanghai economy even on Chinese economy for 150 years, the Bund is the most characteristic view in Shanghai with rich cultural connotations relies on the idiomatical waterfront, long dyke, green trees, and the streetscape of marvelous constructions.

The Bund is always the top tourist spot in the Shanghai city. Apart from the featured exhibition of architectures, the Garden Bridge of Shanghai, the pretty of Huangpu Park, the originality of the Flood Control Wall, and the beauty of the largest river of Shanghai, the Huangpu River are all the places of interest. In addition, Huangpu Cruise, the commercial street Shiliu Pu for convenient shopping and leisure, the memorial square in honor of Chen Yi, the first mayor of Shanghai in 1949 in the communist era, Waterfall Clock- an electronic clock showing standard times of main cities in the world on a water-like curtain, Lovers’ Wall- the spacious walkway for sightseeing above the flood control wall are all worth visits.