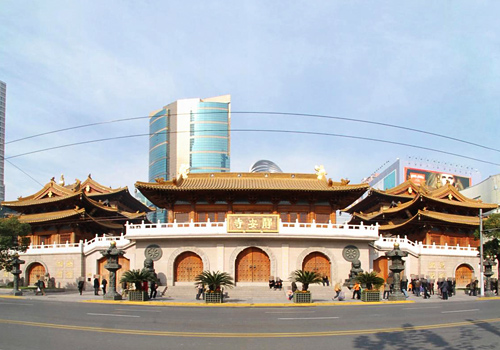 Jing'an Temple is a famous Esoteric Buddhist temple in the city of Shanghai, peacefully located amidst busy streets just as its name implies (Jing'an means peace and quiet in Chinese). The old-famed Jing'an District just named after the temple. According to the story, Jing'an Temple was first built by Wu State (222-280) at north of Wusong River (also called Suzhou River) in 247 during the Three Kingdom period (220-265). Originally named as Chongyuan Temple, the temple renamed as Jing’an in 1008 in Northern Song Dynasty (960-1127). To protect from the flood of the nearby river, Jing'an Temple was moved to present site in 1216, Southern Song Dynasty (1127-1279). Reconstructed and repaired many times in the history, the existing architecture of the temple was mainly built during the reign of Emperor Guangxu (1875-1908) in Qing Dynasty (1636-1911).

What to see in the temple? 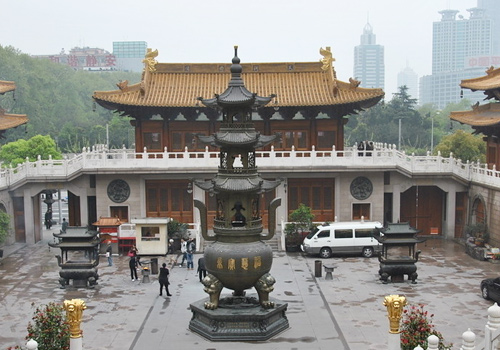 The naming approach of the temple has become Esoteric Buddhism from Zen Buddhism. And the abbots can not be inherited by the monks of the temple any more. Instead, employment system was adopted. Chisong mage for example, was employed by Jing’an Temple.

The Biggest Jade Buddha in China

The latest reconstruction of Mahavira Hall was completed in 1991, with a Sakyamuni Statue enshrined and worshiped inside, which was made of pure jade and transferred from Burma. It has a height of 3.87 meter, a width of 2.6 meter and a weight of 11,000 kilograms, regarded as the biggest jade Buddha in mainland of China at present. The jade statue was so big that a wall was torn down to hold it. The statue was made according to the style of traditional Buddhist of Han Nationality that the face was shaped like a full moon and the expression was tender and serene. In 2009, an additional silver statue of Tathagata weight in 15 tons also placed in the temple. 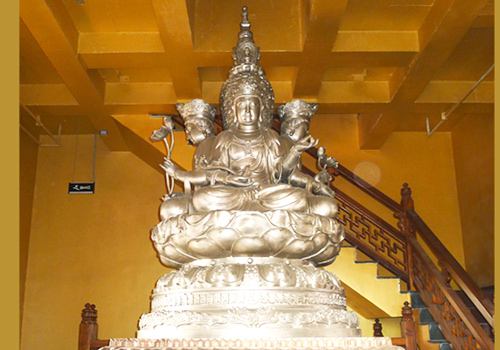 April 8th of Chinese Lunar Calendar, the birthday of sakyamuni, is the temple fair of Jing'an Temple, which will last for three days. Join in the temple fairs has become a tradition for Shanghai people. The first celebration ceremony was held in the 7th year of the reign of Emperor Guangxu, Qing Dynasy. During the temple fair, thousands of devout men and women came to the temple, and lots of reed mat sheds will be put up, under which the nearby peasants set up stalls to sell some cheap and good agriculture products and handcrafts. It is the time that the temple is rather bustling with noise and excitement.