Locating in the downtown area, Jade Buddha Temple of Shanghai just likes a pure land, quite peaceful and venerable. Originally built in 1882 of Qing Dynasty (1638-1911), it is a temple to enshrine two jade Buddha statues which were brought from Burma by the monk from Mount Putuo in Zhejiang Province, Hui Gen. According to the story, Hui Gen has brought back 5 jade Buddhas and left a sitting and a reclining Sakyamuni in Shanghai and raised money to built the temple, hence obtaining the name. The temple was destroyed by the revolution overthrowing the Qing government and it is so lucky that the two jade Buddha statues were saved. The present temple was rebuilt later and completed in 1918 at the site, which was built grand and magnificent with the layout and style of Song Dynasty (960-1279). Jade Buddha Temple is a key temple in Shanghai that thriving with flows of disciples every day, especially on the 1st and 15th day of every lunar month as well as all the traditional Buddhism festivals. 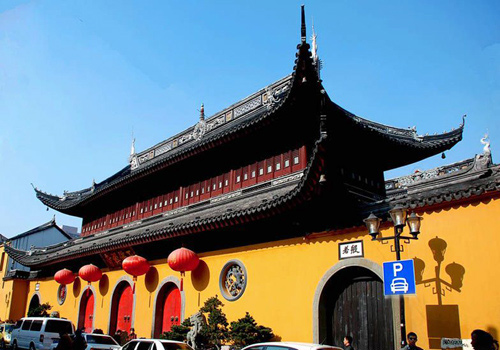 What to see in Jade Buddha Temple?

Covering about 77 acres, the classical layout and architectural style of Song Dynasty makes the temple unique and inimitable with neat and strict composition, ingenious structure and splendid appearance. Along the central axile wire from south to north, there successively standing the main buildings of Devajara Hall, Mahavira Hall and the Jade Buddha Tower; on the two sides in the east and west are the Kwan-yin Hall, the Amitabha Hall, the Zen Hall, Recumbent Buddha Hall, Cultural Relic Room and the Dining-Room, a total of over 200 rooms and halls. 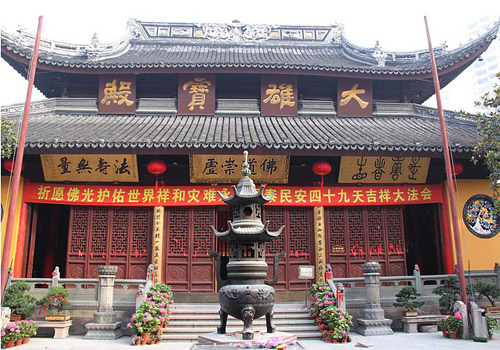 Jade Buddha Temple is well known for the two jade Buddha statues, both of which are preciously carved from the whole sparkling and crystal-clear white jades, making the statues the beauty of sanctity. The sitting Buddha is in the Jade Buddha Tower; it is an explaining-Buddhism Sakyamuni, which is 1.92 meters high and weight in 1 ton with fine carving and beautiful shape. Decorated goldleaves and agates encrusted on the statue are donated by disciples, portraying the Buddha in his meditation and enlightenment. 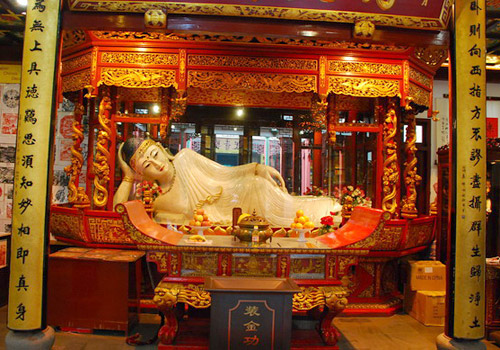 The reclining Buddha is 0.96 meters long; it is a statue of Parinirvana Sakyamuni by his age of 80. Lying on the right side, the figure has his left hand placing on the left leg, supporting the head by his right hand, making a shape called as "lucky repose". His sedate face just shows the peaceful mood of Sakyamuni when leaving this world. Another grand reclining Buddha is enshrined on the opposite, which is 4 meters long and brought from Singapore by the tenth abbot of the temple.