Ming Xiaoling Mausoleum is the largest imperial tomb in Nanjing City and is also one of the largest imperial ones in China. It took about 17 years to construct this mausoleum, where Emperor Zhu Yuanzhang, the first emperor of the Ming Dynasty (1368-1644) and his Queen Ma were buried.

In 1384, Queen Ma died and was buried at the mausoleum and was bestowed the title "Queen of Xiao Ci" which means "Queen of Filial Piety and Kindness" by the emperor. Hence, the mausoleum was named after her title. Covering a lager area, Ming Xiaoling Mausoleum is renowned for its unique design, eminent status, amazing beauty and its magnificent construction. It is the milestone in the development of Chinese imperial mausoleums and deeply influenced the mausoleum style of the following ages. On July 3 of 2003, Ming Xiaoling Mausoleum was listed as a World Cultural Heritage Site by the UNESCO. 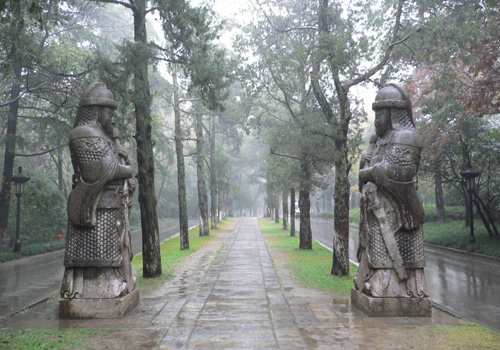 About the Tomb Palace of Ming Xiaoling Mausoleum

With a history of over 600 years, Ming Xiaoling Mausoleum still keeps the original grand style, especially the intact underground tomb palace. As the final resting place of the first emperor of Ming Dynasty, the specific place of the tomb palace is a myth for a quite long time and there were not any evidences in the history records. It was said that there were about thirteen funeral processions in different places at the same time when the funeral ceremony of Emperor Zhu was held. As a result, nobody knew where the real tomb was. To find out the truth, some archaeologists spent almost six years exploring the specific place since 1998. At last, Dulongfu (独龙阜) is regarded as the central place of the tomb palace.

The Ming Xiaoling Mausoleum is made up of two major sections: the Sacred Way and the main body of the mausoleum itself.

The Tablet Pavilion, which is also called Sifang Cheng(四方城), is located not far from the entrance. A majestic tablet was erected by order of Emperor Zhu Di, the fourth son of Zhu Yuanzhang as well as the third emperor of Ming, to eulogize his father's merits and virtues. The tablet is set up on the back of Bixi, a legendary animal similar to tortoise. 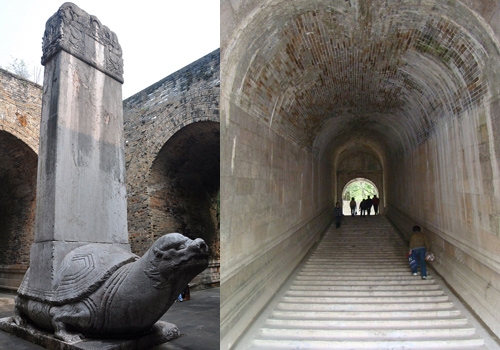 The Sacred Way is about 800 meters long. By the first half of the Way, there are 24 stone animals of 6 types guarding the mausoleum, with two stone animals standing and the next two lying. The animals postured differently, conveying auspicious meanings. For example, the lions, king of the animals, show the stateliness of the emperor: the camels, symbols of desert and tropical areas, indicate the vast territory of the dynasty and the elephants imply that the policies of the dynasty are to meet the desire of the grass root and the stabilization of the dynasty. Beyond the stone animals, there are a pair of stone columns carved with dragons, these columns are also called Huabiao (华表) which look like those  srecting on the Tiananmen Square in Beijing. By the end of the columns, it is the stone statues of ministers and generals. 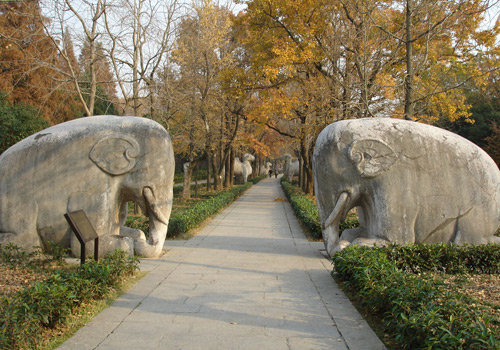 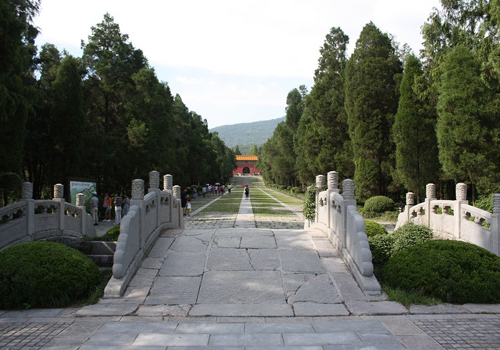 The next part is the Xiaoling Hall, the major structure of the mausoleum. It was rebuilt in the Qing Dynasty (1644-1911) and was smaller in size than the original. Figures of Emperor Zhu Yuanzhang and his Queen Ma are placed inside on the wall. There are also a variety of sculptures depicting various scenes like the "Two Dragons Playing with the Pearl", "the Heavenly Horses Flying in the Sky" and "the Bright Sun over the Country".

With stone stairs leading to the top, Fang Cheng is a castle-like building, about 75 meters wide, 31 meters long and 16 meters high. You can find Ming Lou which is a structure built in palace style of the Ming Dynasty. The ceiling of Ming Lou has been destroyed, only left four walls. These two structures are both innovations of the Ming Dynasty.