Location: at the northern side of the Dragon Snow Mountain Scenic Area, Yulong Naxi Autonomous County, Lijiang City, Yunnan Province
Area: 16.6 square kilometers
Admission Fee: 40 Yuan / person
Accommodation: few hotels available there, so it is suggested to go back to Lijiang for night
How to get there: there are no shuttle buses between Lijiang and the spot; tourists can contact the Yak Ropeway Company in Lijiang beforehand for the transfer
Opening Time: 08:00 - 17:00
Best Time for Visit: April - October

The Yak Plateau is a part of the Jade Dragon Snow Mountain Scenic Area, where the Yi and the Tibetan ethnic minorities live. The local people live on stock raising, inheriting their own pristine custom and culture. As a typical pasture, the Yak Plateau is accompanied with snow mountain scenery, crystal Heishui River and dense primeval forest, framing a tranquil painting of nature. With carpet of colorful flowers in spring, cushion of green grasses in summer, golden lawn in autumn and snow-capped sights in winter, the plateau is an ideal place to feel the different looks and beauties of nature.

What to see in Yak Plateau?

The plateau consists of the Yak Snowfield, Yak Snow Valley, Heishui Valley, frozen "Bridge" over the Heishui Waterfall, Snowflake Lake, Immortal Lake, Yak Stream, broad meadow and wild flowers, Lijiang hemlock forest, forest of Larix potaninii var. chinensis, oakery as well as ethnic minority flavors. Moreover, it is the right place for shooting the Jade Dragon Snow Mountain and watching its thirteen peaks which are covered with snow all year round. At small shops on the Yak Plateau, a chance of trying the local barley wine, buttered tea and roast yak meat will be offered. 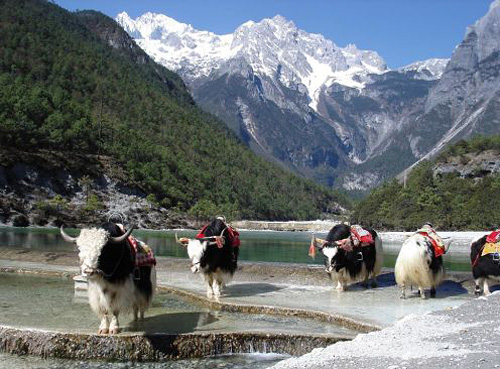 Slightly different from some other scenic spots, the Yak Plateau is not only an excellent place for sightseeing but also an ideal summer pasture. Tibetan herdsmen who live at the foot of the mountain drive their livestock up to the plateau for feeding from spring to autumn, so tourists who visit the spot during the time will have a chance to see how the local minority live in their small summer houses on the plateau. 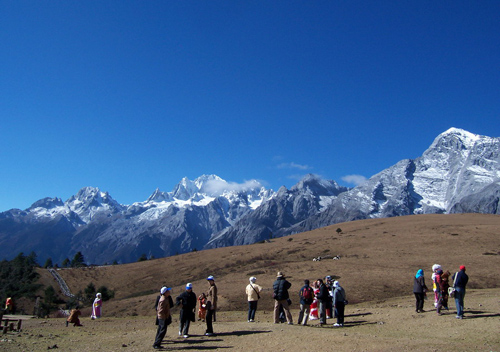 Walking westwards along the plank road, visitors can see the flavescent Snowflake Lake, where yaks drink water. The water of the lake flows from the limpid Immortal Lake (Chinese: 瑶池, abode of fairy mother goddess in Chinese myth), which is the highest point of Yak Plateau.

- Sanduo Festival (Chinese: 三朵节 or 三多节)
The festival falls on the eighth day of the second month in Chinese lunar calendar, usually occurs on the beginning of March. It is known as a special festival of Naxi People living in Yunnan Province, in a bid to worship the God Sanduo, who is believed to be their greatest guardian god by this ethnic minority. The god is imagined to be the incarnation of Jade Dragon Snow Mountain, a war lord wearing white helmet and white armour, holding a white spear, and riding a white horse. In Tang Dynasty (618-907) ancestral temples had been constructed for enshrining and worshipping the god and today it has become a legal holiday of the Naxi People.

- Festival of Circling Gemu Mountain (Chinese: 转山节)
This is the most important festival for the Mosuo People who live by the Lugu Lake. The festival falls on the 25th day of the seventh day in Chinese lunar calendar, which is considered as the birthday of the Mosuo's ancestor. During the festival, the Mosuo people will be in their best dresses, worshipping the goddess, singing and dancing, shooting arrows with a bow, etc.

- Mila Festival (Chinese: 米拉会)
Also called Bangbang Festival, Mila Festival is one of the traditional festivals of the Naxi People in Lijiang. On the day of the festival (the 15th day of the first month in Chinese lunar calendar), people will gather at the Dayan Town of Lijiang Naxi Autonomous County with headstalls, hencoops, ploughs, harrows, barrels, hoes and other wooden farm tools and trade with each other. After the festival, people there will be about to be busy with agriculture again, hence the festival is a grand meeting for the local to prepare for spring ploughing as a matter of fact. 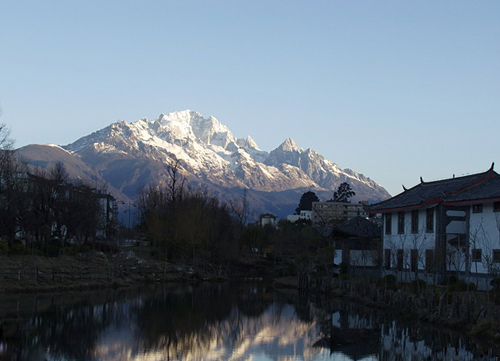 1. The plateau locates at a high altitude of 3800 meters, so some visitors may be attacked by altitude reaction such as headache and nausea. If suffered from that, slow down your walking or have a good rest.

2. Raining days of the region mainly fall on April, July and August, please check the weather forecast and take along rain gear if necessary.

3. The temperature in the Jade Dragon Snow Mountain Scenic Area usually drops down sharply, compared with other seasons, so please take along enough clothes before your visit.

4. Down jackets and oxygen bags can be rented on the mountain.