The Old Town of Shuhe

About five kilometers north from Lijiang Ancient Town, Shuhe Old Town, the geographical center of scenic spots of Lijiang, is one of the oldest habitats of Lijiang and well-preserved town on the Ancient Tea Route (茶马古道) showing the history of Naxi ethnic minority group from farming centralization to commercial centralization. An important part of the Lijiang Ancient Town area, both the towns were listed as World Cultural Sites by the UNESCO in 1997. 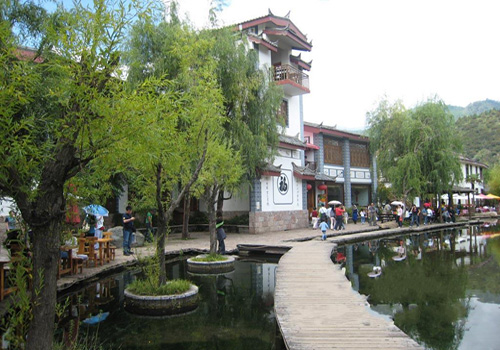 Explore the Old Town of Shuhe

Shuhe is known to local people as Longquan Village (Dragon Spring Village, 龙泉村) which is said to be the birthplace of the eminent Mu Family of Naxi minority ethnic group. Renowned as "Village of Leather", the Old Town of Shuhe has a prosperous market in the central square covering an area of 250 square meters which used to be fur and leather trading center in Lijiang and has many excellent artisans that good at fur and leather processing. Ancient shops stand around the square with dark red painted wood doors opened and old people sitting and chatting that shows leisurely characteristic of the old town. Observing carefully in the center of the square, visitors will find that Sifang Street in Lijiang Ancient Town is similar to this square.

Walking northward along Shuhe Street for 100 meters, visitors will get to the fountain head of Jiudinglong Pool (九鼎龙潭) which is regarded as a holy spring by the local people. The Beiquan Temple (北泉寺, North Spring Temple) built near the pool is the same style as other temples in Lijiang. The Sansheng Temple (三圣宫, or Three Saints Temple) standing by the spring is a traditional Chinese quadrangle. 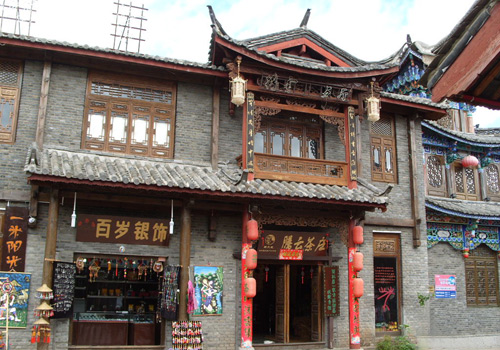 The Museum of Ancient Tea Route

With a long history that can be traced back to 680AD, the Ancient Tea Route started from Dali, Lijiang, Diqing, Lasa and led to India in the west. The Museum of Ancient Tea Route is the first museum studying the ancient tea routes in China as well as the first museum researching Pu'er tea culture in Lijiang. The museum is composed of Entrance Hall (序厅), the First Hall of History (史事1厅), the Second Hall of History (史事2厅), Shuhe Hall (束河厅), Leather Artisans Hall (皮匠厅), Hall of Tea and Horse Culture (茶马风情厅), Tea Ceremony Hall (茶艺厅), and Material Center Hall (影响资料中心), showing history, routes and events of the Ancient Tea Route in detail. Meanwhile, the museum has also been reconstructed on the base of the Mu Family's Residence, where some art works of famous painter Ma Xiaoxian (马萧仙, one of the painters of Lijiang Mural) are preserved. 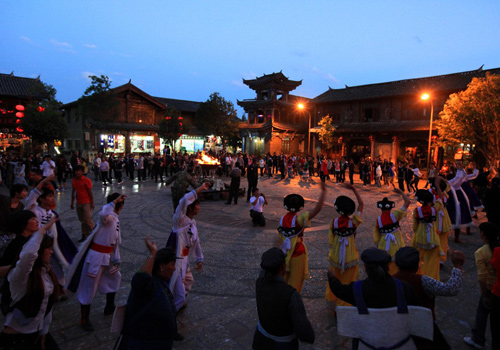 The most interesting thing of visiting Shuhe Old Town is to explore the Eight Sceneries of Shuhe (束河八景).

In the west part of Shuhe near Jubao Mountain (聚宝山), there is an old stone bridge called Qinglong Bridge (青龙桥, Green Dragon Bridge), built by the Mu Family 400 years ago and 25 meters long, 4.5meters wide and 4 meters high. Having bathed in sun and rain for so many years but still standing there in good condition make it known as one of the most magnificent bridges in Lijiang. In spring, willows by the bridge grow new branches and leaves and swing with the wind by Qinglong Bridge. Here comes the first scene – Yan Liu Ping Qiao (烟柳平桥, literally smoke-like branches swing by the bridge).

As one of the oldest markets in Lijiang, the central square of Shuhe has five streets stretching to different directions. Unlike many other markets, market in Shuhe has already opened till the evening since the ancient time. The lanterns dotting the night market creates the second scene – Ye Shi Ying Huo (夜市萤火, literally firefly-like lanterns at the night market).

Four of the Eight Sceneries can be found in Jiuding Dragon Spring. At the foot of Dragon Spring Mountain, Jiudinglong Pool is surrounded by tall old trees, with the clear reflection of Yulong Snow Mountain in the lake when it is windless. This the third – Xue Shan Dao Ying (雪山倒映, Reflection of Snow Mountain). A broken stele erectting on the bank that is too old to tell its age makes some ringing-like sound when hit by a stone, and forms the fourth scene – Duan Bei Qiao Yin (断碑敲音, literally the sound from the broken stetle). The fifth one is the Yu Shui Qin Ren (鱼水亲人), which gets the name for fishes in the water often swim towards when visitors come to feed them. On the edge of dragon spring stands the Three Saints Temple, where the Avalokitesvara is worshipped at the west hall, the Dragon King in the north hall and Sun Bin (died in 316 BC), an outstanding strategist and founder of leather processing in the south hall. With the base of the east hall stretching to dragon spring, the three halls are connected with each other by corridors where visitors can take a rest and enjoy the beautiful scenery. The best time to stop by here is clear nights when the moon hangs in the sky. This scene is said to be the sixth – Long Men Wang Yue (龙门望月, literally watching the moon at the Door of Dragon).

The last scene can be found in Songyun Village at the south of Shuhe. Behind the village is the Stone Lotus Mountain with a cave, which looks like a tiger's opening month. Local people built Stone Lotus Temple at the entrance of the cave with the wish of calming the tiger. This site was once a night school at the first half of the 20 century and students used to read here by the fire, hence come the scene of Shi Lian Ye Du (石莲夜读, night reading in Stone Lotus Mountain by the fire).