In the music culture of Naxi minority ethnic group in Lijiang, there is a famous music called Naxi Ancient Music which is the oldest music in Yunnan dating back to 14th century. As one of the oldest school of music in China, Naxi Ancient music is a combination of Naxi minority ethnic group and Han minority ethnic group which is affected by Confucian and Taoism culture. Naxi Ancient music is composed of Baisha Orchestral Music (白沙细乐), Dongjing Music (洞经音乐) and Huangjing Music (皇经音乐) which combining religious rites music in Taoism, ceremony music of Confucian, poetry writing of Tang, Song Yuan Dynasty and Qupai Tune Music(曲牌音乐) into its own music style. With three characteristics, say ancient melodies, ancient instruments and aged musicians, Naxi Ancient Music is praised as the fossil of music. In Lijiang Ancient Town, the performance of Dayan Naxi Ancient Music attracts visitors in and abroad every night and becoming one of the highlights during trip to Lijiang. 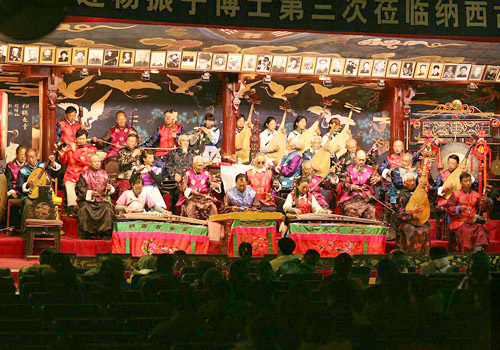 Dongjing Music in Lijiang is a combination of music from Taoism, Confucian and local Naxi music with a long history in Naxi minority ethnic group. The first characteristic of Dongjing Music is the combination of Taoism and Confucian music which is similar to rites music in Taoism while not using Suona (唢呐, looks like trumpet) forming a delicate style like the music in Confucian. The second characteristic of Dongjing Music is that it preserving some poetries and Qupai Tune Music which is already disappeared in central China that they were original created. For example, Bagua (八卦, the Eight Diagrams) in Dongjing Music, is proofed to be originated from the two Toism music, say Nichang Yuyi Dance Music (霓裳羽衣舞曲) and Ziwei Bagua Dance Music (紫微八卦舞曲), in 741 promulgated by Li Longji (李隆基, the emperor of Tang Dynasty ruled during 712-756 who led the country to its most prosperous period), the former has already disappeared while music part of the latter one is still existing in Dongjing Music. The representative of Dongjing Music is Lang Tao Sha (浪淘沙) which is created according to the poetry writing by Li Yi (李煜, emperor of South Tang ruled during 961 to 975 who has high accomplishments in art aspect) presenting solemn and magnificent melody. 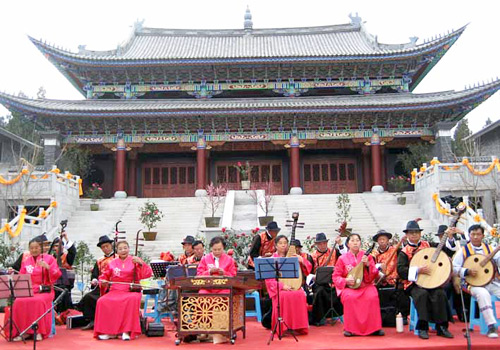 Inheriting Naxi Ancient Music is quite strict that passed from masters to disciples or fathers to children in oral form one tunes to another. The present chairman of Dayan Ancient Music Research Association (大研古乐研究会) is a 70 years old man called Xuan Ke (宣科) who explains the background of music to be played in Chinese and English during the performance. Mr. Xuan had led the group of Dayan Ancient Music Research Association, including the oldest musician who is more than 80 years old, to visit United Kingdom, France, Norway, Finland and other 10 countries and regions to present Naxi Ancient Music and gained warm welcome and high praise. With old musicians passing away, there are more and more young musician join the association to carry forward Naxi Ancient Music.