Sitting at the center of the old city center of Lhasa, Barkhor Street is a well-known circumanbulation and commercial center with unique Tibetan tradition and culture.

In the middle of the 7th century, following the construction of the Jokhang Temple on the previous lake, four palaces were constructed all around the building site for Songtsan Gampo and his concubines and officials to supervise the project. After the completion of the temple, numerous pilgrims travelled from far away to pay their respect to Sakyamuni whose life-size sculpture was enshrined in the Temple and a pathway around the temple took shape little by little. Afterwards, 18 structures were built nearby one after the other, providing pilgrims and merchants with accommodation. 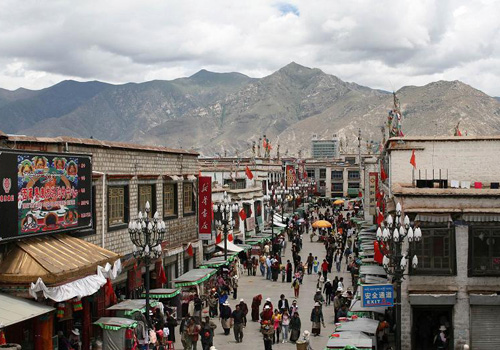 After the 15th century Jokhang Temple became the communication center of Buddhism of Tibet, more and more Buddhists moved to live in the vicinity of the temple, which boosted the emerging of some smaller temples, Buddhist schools, folk houses, stores, workshops and many other facilities. With Jokhang Temple being placed in more and more prominent religionary statue in Tibet, Barkhor Street became a crucial circumambulation and every day a large number of pilgrims walked clockwise around the temple via this street to show their devoutness to Sakyamuni by turning sutra tube in hand.

With a history of over 1300 years, this sacred way of Buddhism has now evolved into a unique old style street quarter with four main sections connecting 35 branches, appealing to hundreds of thousands of tourists from all over the world. 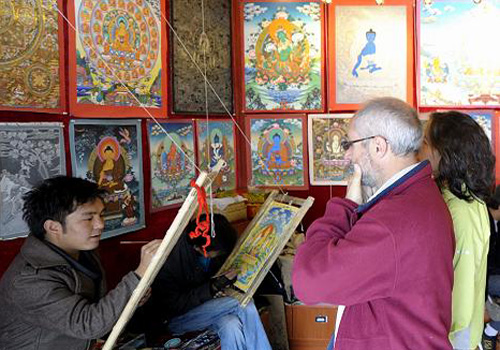 Circumanbulation are the routes which pilgrims of Tibetan Buddhism walk long clockwise with a sutra-turning tube to worship Sakyamuni. There are three best-known ones in Lhasa, the shortest around Jokhang Temple, the medium around Barkhor Street and the longest around almost the whole Lhasa City.

Everyone who has ever learnt Tibetan history and literature might heard of Tsangyang Gyatso (仓央嘉措), the sixth Dalai Lama of Tibet, who was not only an outstanding religionary leader but also a brilliant Romanticism Poet. It is said that Tsangyang Gyatso once made the round of Tibet to seek the savior. When he had a rest at a small restaurant one day, a beautiful young girl stole a glance at him outside the door and he was deeply impressed by her, which inspired him to create a poem about her. 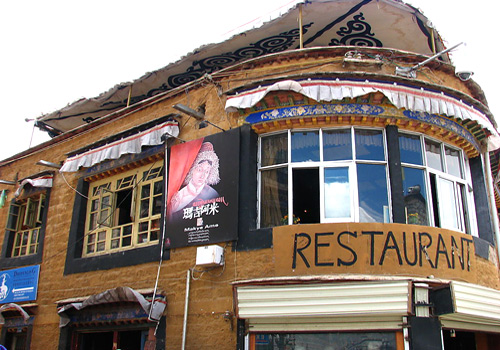 Today on Barkhor Street, there is a bar which is said to be the place where Tsangyang Gyatso and the girl met. Meaning "unmarried girl" in Tibetan, Makye Ame (玛吉阿米), the current name of the bar as well as the girl's appellation in the poem, is not the original restaurant any longer but a famous yellow-painted art bar with panings, photos, handworks, and foreign works among travelers.