The Leshan Giant Buddha, which was chiseled on the cliff where the Min River, the Qingyi River and the Dadu River flow together, is the world's largest stone-carved Buddha so far. The giant sitting Buddha was proposed to be built by Monk Haitong in a bid to weaken the flow of water and reduce water disaster. It was carved from 713 AD and not completed until 803 AD, costing an unprecedented amount of manpower and material resources. On December 16th of 1996, this massive spectacular Buddha statue was officially authorized as "World Cultural and Natural Heritage" and was placed on the World Heritage List by the UNESCO (United Nations Educational, Scientific and Cultural Organization). 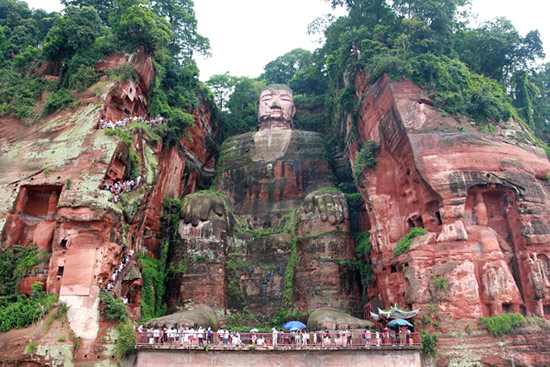 The Buddha was constructed to be completely symmetrical at the water while sitting on his thrown; it is 71 meters high with a head width of 10 meters, an ear length of 7 meters, a nose length of 5.6 meters, an eye length of 3.3 meters, a shoulder width of 28 meters, a figure length of 8.3 meters, and a foot width of 8.5 meters on which can sit more than 100 people. This Buddha has been hailed by poets and scholars as a monumental achievement, and fitting allowed the almighty Buddha to descend to earth and rest with mortals. On sides of the Buddha are respectively the Lingyun Trestle Road and the Jiuqu Trestle Road. 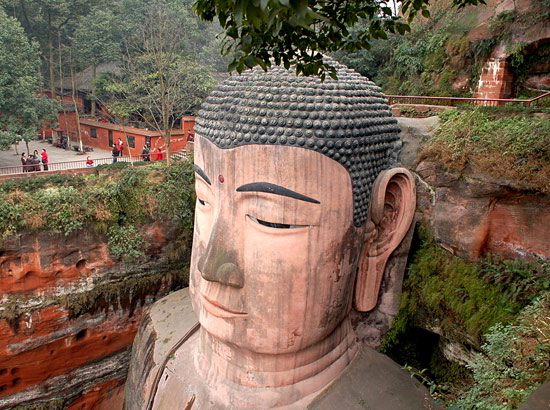 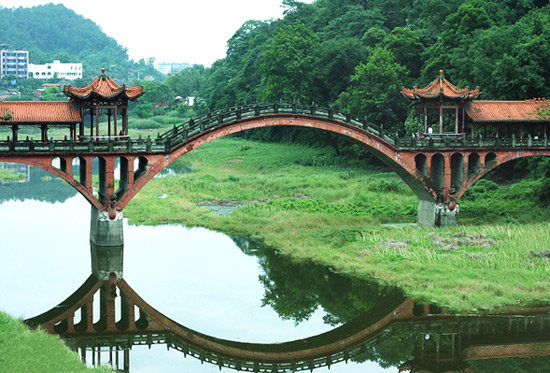 One of the achievements of the Leshan Giant Buddha Statue is the attention to details: 1021 individual strands of hair were carved in its head while the ears were created with wood in perfect proportion to its head and body; a robe was sculpted as part of the Buddha as well as a stone tablet that he claps to his chest; the body is engineered to drain water after rain to prevent erosion. The sheer scale and complexity of this Buddha are reasons enough to visit it and see firsthand the industry and ingenuity of the ancient Chinese.