Yuantong Temple travel tips: 1. Yuantong Temple is one of the main temple in which Kunming people participate Buddhist activities. Huge crowd of people comes for worshiping on the first day and the fifteenth day of every month in China lunar calendar. Tourists may have a change to witness the worship if they go on the right days.
2. Flowers especially the flowering cherries on the Yuantong Mountain blossom from March to April, in which flowers lowers would be feasted with the lovely sea of flowers.

Yuantong Temple is the biggest and one of the oldest Buddhist temples in Kunming City which is the location of Buddhism association of Yunnan province and Kunming City. Announced as a cultural relic unit under provincial protection in 1998, Yuantong Temple gains high reputation in Southeast Asia area and attracts many visitors to visit every year. Facing the Yuantong Street and neighboring Kunming Zoo, Yuantong Temple is famous for its symmetrical layout which highlights the main structure of the Temple, plus flourishing trees and pools decorating the temple. The quiet atmosphere insdie makes it a place to relax in the bust city. One of its architectural characteristic is that altitude decreasing from the entrance to the back, which is different from most temples with a building frame of increasing altitude. Besides, visitors can view three schools of Buddhism, namely, temples of Mahayana (大乘佛教), Hinayana (or Theravada, 小乘佛教) and Tibetan Buddhism (藏传佛教), by visiting the Temple. 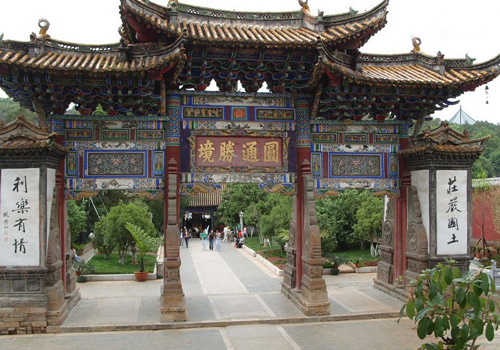 In Tang Dynasty (618-907), the emperor built a temple named Potalaka Temple which was the oldest temple of Avalokitesvara (观音菩萨) in China ("Potalaka" is Sanskrit language and means "bright mountain with blossom of little white flowers where Avalokitesvara lives"). After existing for no less than 400 year, Potalaka Temple was burned to ground in war in Yuan Dynasty (1271-1368) then rebuilt from 1301 to 1319 and changed its name to Yuantong Temple. It gained favor of the Mu family, the most powerful family who ruled Yunnan at that time in Ming Dynasty (1368-1644), was repaired and expanded to the biggest Buddhist temple in Kunming City. In Qing Dynasty (1644-1911), Wu Sangui (ruler of Yunnan at that time) made an overall repair to the temple, moved the entrance to the South and built the memorial arch Yuantong Shengjing (圆通胜境) and the Octagon Pavilion which lay the foundation of Yuantong Temple today. After suffered from floods which ruined the figure of Buddha in 1871, a new statue of Tathagata was set in the main hall; however, as a temple of Avalokitesvara there should be a statue of Avalokitesvara to be worshiped, thus, people put a statue of Avalokitesvara in the Octagon Pavilion in front of the main hall. 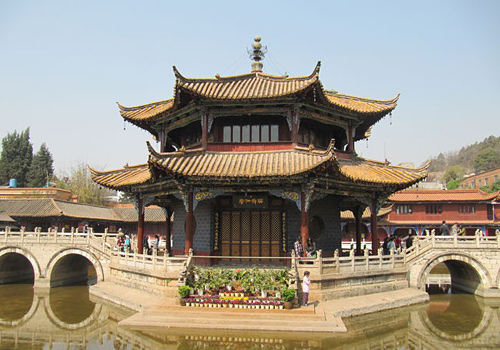 The entrance is at the highest altitude, the memorial arch Yuantong Shengjing (圆通胜境) is on the middle and Yuantong Hall at the lowest altitude. The three parts line in a row facing south. After passing the memorial arch visitors will see the Temple of Deities where four deities (Dhritarastra, Vidradhaka, Virapaksa and Vaisramana), who protects the land and brings good weather, are worshiped. Behind the Temple of Deities comes the Pool of Setting Free (放生池) with the Octagon Pavilion in the middle and two three-holes stone bridge connecting the Temple of Deities, the Octagon Pavilion and Yuantong Hall.

In religious discipline of Buddhism, No Killing or ahimsa (不杀生) comes first, considering killing to be the most evil crime and setting life free to be the most meritorious deed. Copper Buddhism Hall, the only Hinayana temple in mainland China, can be found at Yuantong Temple with a sitting copper statue of Tathagata. In the Copper Buddhism Temple, besides the copper statue of Tathagata which is 3.5 meters high and weighs 4 tons, on the wall there are four colored pictures presented by Huating Temple of Kunming (昆明华亭寺), Dianxi Jizu Mountain (昆明华亭寺), Ban'na Buddhism temple headquarter (版纳总佛寺) and Zhongdian Guihua Temple (中甸归化寺), telling stories of Tathagata's entering into religion, mastering the doctrines, propagating the doctrines for the first time and nirvana which also symbolizes unity of the three schools of Buddhism. Behind the Copper Buddhism Temple is ZhoujiaoTai (咒蛟台) which is said to be the platform built for repulsing the evil "flood dragon", named 蛟 (Jiao) in Chinese.

In folklore of Yunnan, Jiao is kind of dragons living in a cave at the foot of Yuantong Mountain and always causing floods. To prevent the place from floods, people built the platform on the mountain and invited masters of Panlong Temple to recite scriptures to calm this scaly dragon. The platform is called ZhoujiaoTai (咒蛟台) afterwards. In the main structure, Yuantong Hall, a statue of Tathagata was worshiped in the middle, with two 10 meters high pillars with painted sculpted dragons twining on them. With five hundred arhats sculpted on the walls, the building is surely one of the most beautiful Buddhist temples in China. 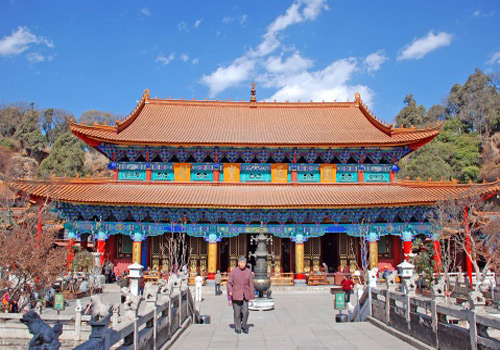 Yuantong Temple is the representative of unity of three schools in Buddhism in Yunnan Province which is different from that of other temples in China. The main structure, Yuantong Hall, is of Mahayana; the Copper Buddhism Temple built in 1990 is of Theravada; and the side hall in the east represents Tibetan Buddhism. Besides complete Buddhism system, Yuantong Temple is also a combination of Buddhism and Taoism for showing sculptures and pictures of Taoist immoatals such as the Eight Immortals (八仙).