Chinese name: 金殿 (Jin Dian).
Location: at the foot of Mingfeng Mountain, about 7 km from Kunming City, Yunnan Province.
Opening time: 07:00-19:00.
Ticket: CNY30.
How to get there:
- by bus No. 60, 10 or 71, get off at the stop of Jindian Lishi Fengjingqu (金殿历史风景区, Golden Temple historic and scenic site).
- by taxi which will take about 30 minutes.
Best time for visit: all year round.

Golden Temple :
1. Temple fair of the temple is fixed on the ninth day of the first month in Chinese lunar calendar (usually falls on January or Febuary), during which various local products are sold and public performance is put on there.
2. The temple is home to several thousand pots of camellias, which is the city flower of Kunming as well as one of the "Eight Famous Flowers of Yunnan". If you are a camellia lover, do not miss the blossom lasting from the end of winter to the beginning of spring.

Kunming Golden Temple, also known as "太和宫"(Taihegong) Golden Temple or "铜瓦寺"(Tongwasi Temple), is one of the important cultural relic protection units in China. Located on Mingfeng Mountain, Golden Temple is 7 km away from Kunming City. As a famous temple in Yunnan Province, Golden Temple acquired the name for its shinning golden appearance. Although the temple has been exposed to wind and rain for hundreds of year, it is still maintained in good condition than the Golden Temple in Summer Palace of Beijing. Also, it is the biggest and well-protected existing copper temple in China, providing important information for researchers to study the ancient metallurgy and architecture in Yunnan Province. 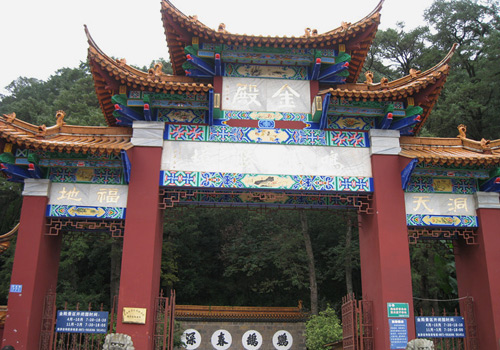 Chinese folk tales has it that Chen Yongbin, provincial governor of Yunnan Province of Ming Dynasty (1368-1644), was told that Mingfeng Mountain in Kunming is a place with good Fengshui (风水, a Chinese system of geomancy). In expectation of getting good luck, Chen built the Golden Temple in the mountain, modeling the Taihegong Golden Temple on Wudang Mountain in Hubei Province, in 1602 to worship Zhenwu the Great (真武大帝, a Chinese god of Taoism). At late Ming, the Mu (沐, sharing a same pronunciation with 木(wood) in Chinese) family ruling Yunnan considered that the temple would hoodoo their family (according to the Chinese theory of Five Elements (metal, wood, water, fire, earth), metal corrodes wood). As result, the temple was moved to the Jizu Mountain in Dali in 1637 (but was destroyed between 1960s and 1970s). In 1671 during Qing Dynasty (1644-1911), Wu Shangui, general of Pingxi in charge of supervising Southwest China in Qing Dynasty, decided to rebuild the Golden Temple at the original site in Mingfeng Mountain of Kunming – that is the one we see there today. Besides the temple and statues, he has also made a Seven Star Sword, which is collected in the temple as the guardian of the temple. 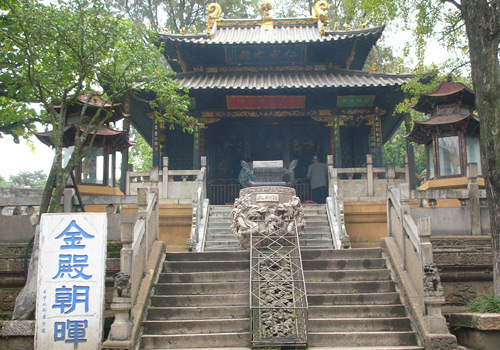 Outside the Golden Temple

There are stone steps paving from the foot of Mingfeng Mountain to the Golden Temple. After crossing three heaven gates which symbolizes three constellations, visitors will see the solemn gate of Golden Temple. In the courtyard many kinds of flowers can be found, among which the camellia and the crape myrtle can be traced back to Ming Dynasty (1368-1644).

In front of the Golden Temple stands a copper flag, on the edge of the top of which the sun and the moon are carved. Between the sun and the moon there are four Chinese characters "天下太平", literally "All is at peace" in English. The Big Deeper is carved on the flag as well. So comes its name: "日月七星铜旗"(copper flag of the Sun, the Moon and  Seven Stars). There are also "风调雨顺、国泰民安" on the flag, which means "good weather for the crops, peace and prosperity around the whole country". This flag is the symbol of Zhenwu the Great, who is considered in traditional Chinese mythology to be the god blessing the country and the people. In the first month of China lunar calendar, people will gather together in Golden Temple to celebrate the birthday of this god of Taoism.

To the Southeast of Golden Temple there is a three-floor Mingzhong Tower, which is about 30 meters high. A copper bell, 2.1 meters high, 6.7 meters in girth, 14 tons in weight, is hanging on the third floor of the tower. With a history of about 560 years, the bell was originally hanging in Xuanhua Tower in Kunming and was not moved to Golden Temple until the Xuanhua Tower was torn down. In 1983, the Mingzhong Tower was built for hanging the bell and the tower becomes the highest architecture on Mingfeng Mountain from which visitors can get good view of scenery around. 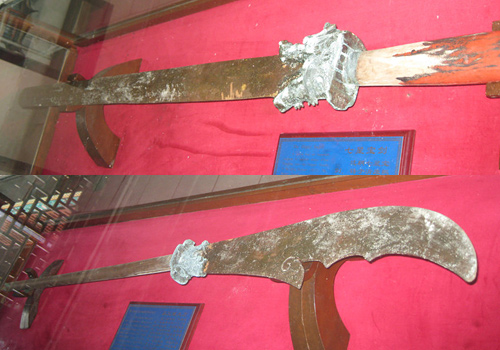 Golden Temple is a traditional Taoist structure in the style of "歇山式" (a typical ancient Chinese architecture with 4 sides of roofs as its trademark). It's about 6.7 meters in height, 6.2 meters in width and 6.2 meters in length. The whole temple, including posts, beams, doors, windows, tiles, altar table, horizontal inscribed board, the statue of Zhenwu the Great and so on, is made of copper. On the door of Golden Temple, there is a horizontal inscribed board writes "鹦鹉春深" which means the weather is always as spring all year round. Inside the temple, the sitting statue of Zhenwu the Great is accompanied with a "金童"and a "玉女"(immortal boys and girls who standing behind an important god in Chinese myth). Apart from 20 kg the "七星宝剑" (Seven Star Sword), another cultural article - a 12 kg saber with wooden shaft which is said to be used by Wu Sangui – is also showed in Golden Temple.