Chinese name: 三仙洞 (Sanxian Dong) Location: at the cliff of the southern bank of a river, 18 kilometers north to Kashgar City, Xinjiang Uygur Autonomous Region. Open time: all day long Entrance fee: free How to get there: by bus or taxi Best time for visit: summer and autumn

Travel Tips: 1. The temperature difference is large between day and night, please bring warm clothes. 2. It is suggested to bring climbing tools to get in the caves.

Located at the cliff by bank of Qiakemake River about 18 kilometers to Kashgar City, the Three Immortals Buddhist Caves are said to be built by the end of Eastern Han Dynasty (25-220) which are the oldest Buddhism caves in west China. The three caves are about 20 meters high from the land which is hard to climb. The attraction has been listed as a culture relic unit of Xinjiang Uygur Autonomous Region in 1957. 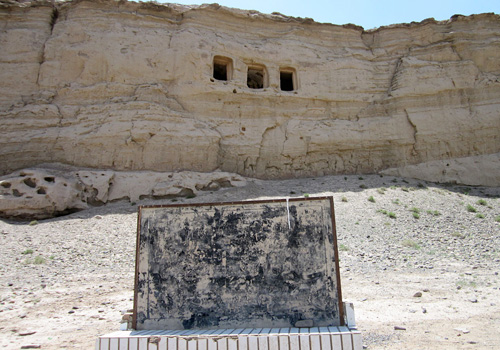 The exact building time of the Three Immortals Buddhist Caves has not been determined for historians and scholars hold different opinions, but most people believe that they were build in the Eastern Han Dynasty. Started during the rein of the Shule (疏勒, an ancient kingdom in the area of present Kashgar) when the Buddhism was introduced from Dayue Group (a herdsman clan in Northwest China in ancient times), Buddhism grotto arts were introduced along with to this area in large scale during 220-589. By studying other grottoes around, scholars believe the Three Immortals Buddhist Caves was also built at that time.

The three caves are facing north on the middle of cliff which is no less than 20 meters high and about 10 meters away from the river bank, so that visitors should prepare safety belt and ropes to get in the caves. The entrances of caves are built into quadrate door case with the middle one a little bit larger than the ones on two sides which is about 2.25 meters high and about 2 meters wide. Grooves can be identified between entrances of caves to the ground which are thought to be equipped with supporting pillars and planks to form ladders for monks to worship gods in the caves in ancient times. 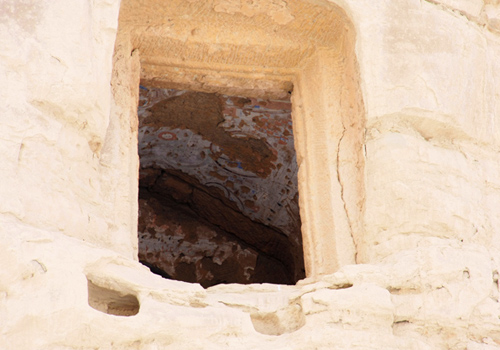 Structure of the Three Immortals Buddhist Caves is relatively simple with bigger front hall and smaller back hall blocked with each other by stone wall. The front hall is in square shape with the width of about 2.8 meters. The three caves were divided by one-meter-thick stone walls but with small holes being dug out to connect each other. Most murals are found in the east cave and the middle cave while there is a barely valuable thing in the west cave.

On the ceiling of the east cave, there is mural painted about sky diagram with red round moon in the middle and stars around which are circled by light blue frame. Outside the frame is milk white flames surrounded by three to four light green semicircles to form the shape of flower. Beside flower shape flames are about 14 images of Buddha such as red clothes Buddha sitting or standing on lotus throne, Buddha standing under linden tree, the height of which are between 20 centimeters to 50 centimeters with dark red, green, yellow, or white aureole on their back. With the edges of ceiling painted with honeysuckle edging, the whole mural on ceiling is thought to show the story of Tathagata before nirvana.

Although the back hall is smaller than the front hall, it is as valuable as the front hall. The walls of back hall in the east cave are painted with Buddha as well among which the east wall preserved best. The main image is Tathagata sitting on lotus throne crossing his legs to make the foot facing up with a standing Buddha on his side lifting something on the right hand. The sitting Tathagata image is different from that of other murals for he is wearing striated clothes in green, blue and red like ethnic skirt in Thailand or Mongolia which is quite rare in Buddhism painting and had high research value. 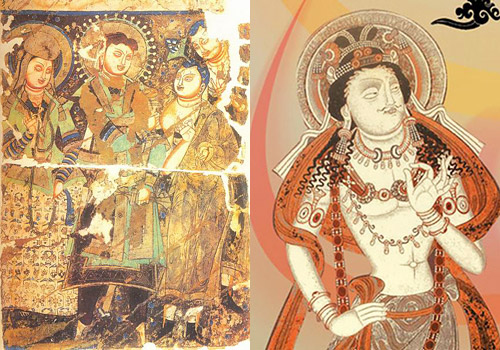 The middle cave is said to be repaired during Qing Dynasty (1644-1911) in which just can be found few murals. However, under the white paint layer, the color of ancient mural still can be identified. The most obvious repainted mural is behind the broken stone Buddha statue with flame shape light decorating the statue in the back hall. Although repainted murals were preserved well, the painting style and color are different from that of the east cave which shows the age of murals. The head of Buddha statue in the back hall of the middle cave was damaged and lost and a remaining statue is about 1.2 meters high and 1 meter wide.

There are many folk stories about the Three Immortals Buddhist Caves in Kashgar of which the little princess is the most famous.

It is said that the Emperor of Shule had a pretty little princess who suffers from ill health since she was born. One day, an augur told the emperor that the princess has a misfortune in 100 days and if she was stung by bees she will be dead. As a country celebrated for fruits, there are surely innumerable bees. Some governors suggested building caves to guard the princess for 100 days from the misfortune and the emperor agreed to do so. Although the princess was safe for the first 99 days, she was stung to death in the last day by a bee hidden in grapes sent to her. Though the purpose of protecting princess fails, the caves are left and become culture relic there.