Chinese name: 黄龙景区 (Huang Long Jingqu)
Location: in the Huanglong Village, Songpan County, Ngawa Tibetan and Qiang Autonomous Prefecture, Sichuan province.
Admission fee: in the peak travel season (1st April – 15th November), the ticket price is 200yuan per person. In the low season (16th November – 31st March), the ticket price is 80yuan per person.
Opening time: 08:00-17:00.
How to get there:
- By shuttle. It is 144 kilometres away from Jiuzhaigou to Huanglong. In the peak travel season, shuttle buses can take you to and fro. From 06:30 to 07:30, two to three shuttles buses are available; at 15:00, you can take shuttle buses back from Huanglong to Jiuzhaigou. When it comes to April, there are shuttle buses leaving Songpan for Huanglong at 07:00. It usually takes you about 90 minutes to reach there. Around three o’clock in the afternoon, you can take shuttle buses back to Songpan.
- By charted bus. Generally you have to spend around 120 minutes to get from Jiuzhaigou to Huanglong by charted bus
Best time to visit: from April to November.

Huanglong Scenic and Historic Interest Area, located in the Huanglong Village, Songpan County, Ngawa Tibetan and Qiang Autonomous Prefecture, covering an area of 40,000 hectares, is 56 kilometres away from the Songpan County in the west, 122 kilometres away from the Pingwu County in the east. Lying at the foot of Mountain Xuebaoding, it consists of two parts, Huanglong and Muni Valley. The former includes Huanglong Valley, Danyun Gorge and Xuebaoding scenic areas, while the latter includes Zhaga Waterfall and Erdaohai Lake scenic areas. The main feature of this attraction is travertine surface. Seen from afar, it looks like a giant dragon stretching from the south to the north and resting in the bosom of glaciers. Huanglong (Yellow Dragon) Scenic Area, named after the remarkable Buddhist temple – Huanglong Temple, and renowned for colorful cascade pools, snow mountains, gorges and forests, is the only well-protected highland wet land. Some rare animals on the verge of extinction can also be found. In the year of 1992, it was designated as the World Natural Heritage by UNESCO. To a large extent, Huanglong Scenic and Historic Interest Area is not only the treasure of Chinese people but also the world as a whole. 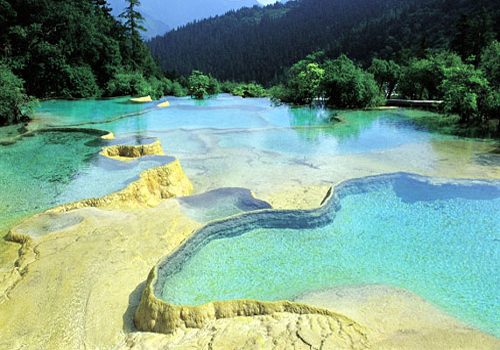 What to see in Huanglong Scenic and Historic Interest Area?

This set of exquisite ponds with limpid water is the prelude to the Huanglong Scenic and Historic Interest Area. The ponds, big and small, surrounding mountains and trees, lie beautifully. You can experience the perfect combination of the dynamic and the static here.

Along the meandering plank road next to the Guest-Greeting Pond, you can be amazed at the waterfalls flying downward from a ten-metre-high and sixty-metre-wide rock step. As the course is twist, the trapezoid waterfalls take on various shapes.

Located on the second stairs of Huanglong, it is a grotto of the lower part of a forty-wide travertine surface. At the entrance, mist prevails as if it were a veil. In the grotto, drops of water spray into your face, making all figures in front of you while invisible. Legend has it that it is for the immortal to wash their body, and that infertile women can get pregnant after washing there. 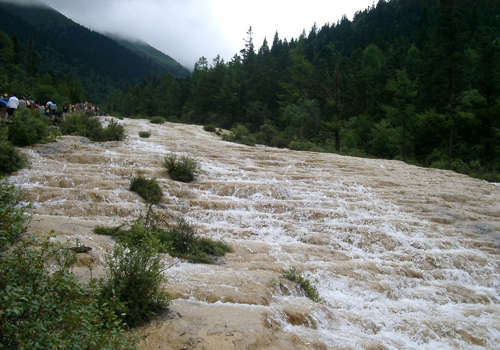 It refers to the travertine surface from Body Washing Grotto to Azalea Reflection Lake. The slope takes on golden, mingled with colours of white, grey and dark green. Water flowing on it looks as if the golden river were pouring silver.

Located in the left of Huanglong, there are more than five hundred coloured pools, known as one of the most colourful travertine surfaces. The glistening pools spread like lotus and lotus leaves; some are as big as more than hundred square metres, while some are as small as they can be pocketed.

It is a set of more than eighty ponds on the left of Sands Floor. As they are close to the forests, the atmosphere is quiet and elegant. The surface of the ponds looks like a mirror; the water is so crystal that you can be see the bottom. 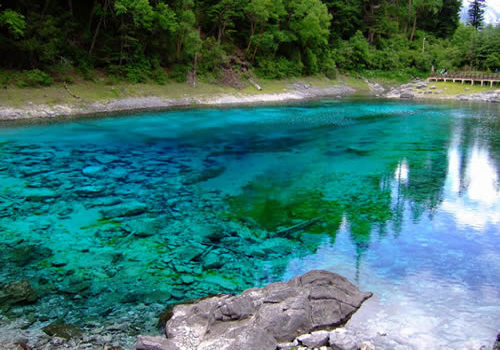 Colored pools, situated 4,166 metres away from Fuyuan Bridge, enjoy 693 pools, and are considered the largest pool groups of Huanglong Scenic and Historic Interest Area, as well as the essence and highlights here. Due to the low dike of the pool, limpid water overflows as if they were blue discs. How marvelous the scenery is! In the sunny day, the discs are glistening; when it comes to the winter, while Huanglong Scenic and Historic Interest Area turns to a sea of ice, the coloured pools at the highest sea level still remain green. Seen from afar, they are jades scattered in the earth, thus being known as the Earth Jade.

On the top of Huanglong, flower-spinning pool is some ten metres away from coloured pool. Being round, the pool so is crystal that you can see its bottom. Water gushing from below makes ripples before your eyes. If you throw flowers in it, the flowers will spin then. The reason for this phenomenon remains unclear yet.