When you arrive in Jinan airport, your local English speaking guide will meet you and then transfer you to your hotel. Free at leisure the rest of the day. 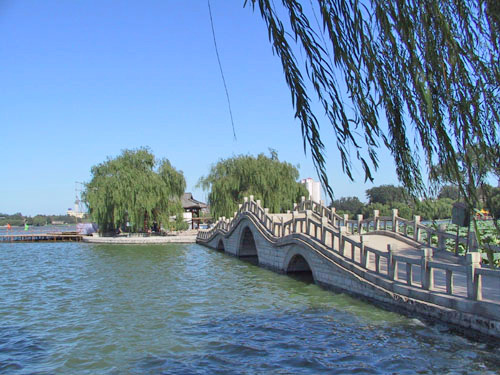 This morning, we will first visit the Baotu Springs. Baotu Spring, also known as the "First Spring under Heaven", is one of the most popular of Ji'nan's springs with a long history of more than 2,600 years. Together with its environs, it has been turned into a park of the same name, located to the southwest of the old city district of Ji'nan.

Then we continue the tour to visit Daming Lake. Located in the center of Jinan, Daming Lake Park is regarded as one of the three must-see tourist spots in Jinan together with the Baotu Spring Park and Thousand-Buddha Mountain. Formerly known as "Lotus Seed Lake" and "West Lake", the lake got its current name in the Jin Dynasty.

Afternoon, we move on to visit the Thousand Buddhas Mountain. During the reign of the Emperor Kaihuang (581-600AD) of the Sui Dynasty (581-618AD), Buddhism became flourished. Many monasteries were built around Lishan Mountain and numerous Buddhist images were sculptured on the rocky cliffs. Hence the place became known as the Thousand Buddha Hill, which today also embraces Yellowstone Cliff (Huangshi Ya) and Jueshan Mountain in the south and east respectively.