Chinese Name: 香港仔
Location: At the south shore of Hong Kong Island.
Opening time: all day long.
Tickets: free.
How to get there: Take bus No.70 from Exchange Square bus terminus (near the MTR Hong Kong Station Exit D) to Aberdeen Promenade.
Best time for a visit: October-March the next year.

Aberdeen is located at the south shore of Hong Kong Island. Aberdeen, plus the sea between Aberdeen and Ap Lei Chao makes up Aberdeen Typhoon Shelters. Administratively, Aberdeen covers the area of Aberdeen, Wong Chu Hang and Ap Lei Chau, but it more often refers to the fishing village only. Aberdeen becomes a well known tourist spot for its floating village and floating seafood restaurants in the Aberdeen Typhoon Shelters. In addition, Aberdeen is also the sites of the Aberdeen Country Park and one of the largest water theme parks in Southeast Asia – the Aberdeen Promenade. 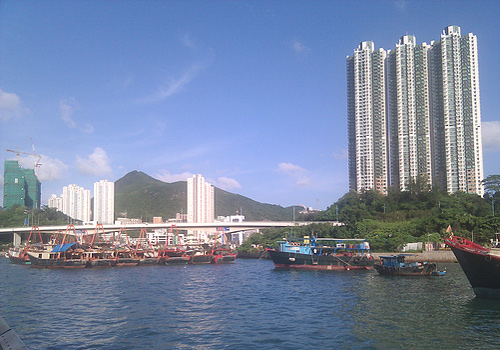 Aberdeen is regarded as the origin of Hong Kong. Even before Hong Kong was opened to foreign traders, there had been villagers residing in Aberdeen. The Xiapu dock built in 1857 is the first large dock in Hong Kong. In the early 20 century, the Dacheng papermaking factory was established in the east of Aberdeen. Due to the enlargement of Aberdeen Typhoon Shelter, the factory was turned into Aberdeen Engineering School and later became the Aberdeen Trade School.


Aberdeen Harbor used to be populated by over six thousand people. Due to the flourishing of nearby fisheries, the population sharply declined. Today most of residents still keep their traditional lifestyles. More and more tourists come here to eat seafood.


Aberdeen was originally a fishing village while the Aberdeen Typoon Shelters was the foremost havens of fishermen. It is home to the Tanka and Hoklo people who live on the fishing boats. Hundreds of boats floating on the Aberdeen Harbor form a both dramatic and pleasant contrast with the modern high-rise buildings along the shore. When the night falls, thousands of lights reflected on the water presents a sparkling sea. When a storm hits, all boats will be brought to the harbor. The villagers gather at the harbor to hold ceremonies on Chinese New Year, traditional holidays and especially on the birthday (the 23rd day of the third month in Chinese lunar calendar, around late April in western calendar) of Mazu (Mazu, the goddess of the sea who is believed to protect fishermen and sailors). It is believed that they are more likely to be blessed by Mazu through holding carnivals and rituals. Every year, they hold dragon-boat racing above the Aberdeen Typhoon Shelter on the Dragon Boat Festival (on the May 5th of the Chinese lunar calendar, late May or early June in western calendar). 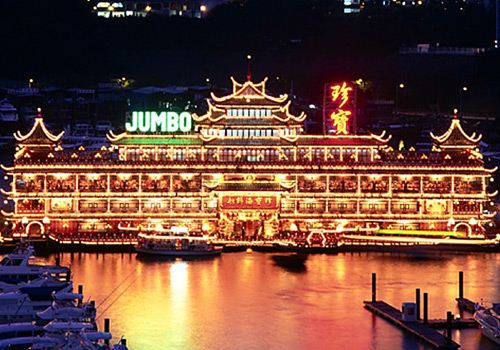 To experience the real life of villagers in Aberdeen, it is better to step into a floating seafood restaurant. Among the countless restaurants, the most prestigious one is the Jumbo Floating Restaurant. Being one of the largest restaurants on the ocean, Jumbo Floating Restaurant is a three-storey deluxe boat with extravagant decorations in an imitation of ancient palace. The columns are twined with red and golden dragons, showing an imposing color. Fresh seafood and dainty Cantonese cuisine are destined to arouse everyone’s appetite. Boarding the restaurant, one can tuck in the inviting seafood and take in the breathtaking night view of the sea as well.

Aberdeen Promenade is seaside gallery along the Aberdeen Harbor. Located in the north shore of Aberdeen Typhoon Shelter, it was opened in 1992 and managed by Hong Kong Leisure and Cultural Service Department. Aberdeen Promenade measures 800 meters long from Aberdeen Wholesale Fish Market in the west to Aberdeen Tennis and Squash Center in the east. Within the Aberdeen Promenade, an open-air square, a children’s playground, a basket court and other entertainment facilities can be found. Along the park, several wharves provide ferries to AP Lei Chau, Lammar Island, Po Toi Island, as well as free barges to Jumbo Floating Restaurant. 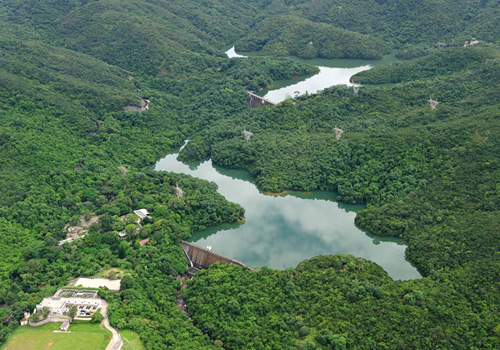 Aberdeen Country Park stands in the north of Aberdeen and Wong Chu Hang and stretches northward to Wanchai Gap. It occupies an area of 4.23 kilometers and embraces two ponds - the Aberdeen Upper Impounding Reservoir and Lower Impounding Reservoir. Aberdeen Country Park is a great place for hiking or roaming with its blooming flowers, rich plantation and singing birds. Visitors can frequently catch the sight of pangolins and squirrels. Entertainment facilities are established in the park, including bacon ovens, the Taichi platform and the Children’s Playground. A Tourist’s Center in the park provides inquiry service and interesting materials about the park.