Introduction to West Lake of Hangzhou

World-known for dainty landscape of lakes and mountains as well as a mass of places of historic interests, the West Lake of Hangzhou is considered A Paradise on Earth. It was included in the World Heritage List on June 24, 2011 as the only Chinese lake in that list. 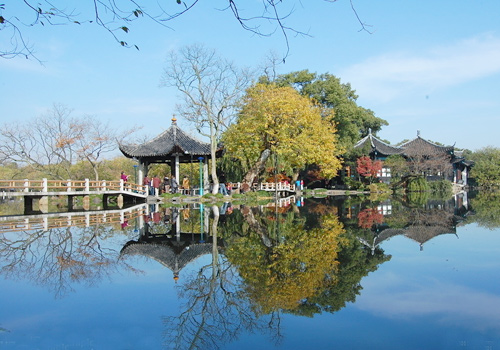 Covering 6.39 square kilometers with a perimeter shore of around 15 kilometers, West Lake is a city lake just second to the Daming Lake in Jinan. The average water depth is 2.27 meters, of which the deepest is about 5 meters while the shallowest is less than 1 meter. The pretty of the West Lake not only lies in the lake itself but also in the surrounded bridges, pavilions and dozens of matched hills. Though the height of these hills are all not exceeding 400 meters, they are graceful on account of unique peaks, bizarre rocks and elegant springs, all together enhance the lake’s appeal to compose a gorgeous picture with the West lake in the middle, resembling all the stars bend towards the moon.

Boasts over 100 units of cultural relics protected under the city, province or even the state, the West Lake is a renowned historic and cultural resort with its integrated natural beauty, historic relics, artistic values and numerous affecting fairy tales. The legend of the beautiful White Snake, and the praised verse given by the distinguished poet Su Shi (苏轼, Known as Su Dongpo) of Song Dynasty (960-1279), who compared the West Lake to Xizi (one of the Four Great Beauties of ancient China), are both contributed to the romance of West Lake.

Origin of the West Lake 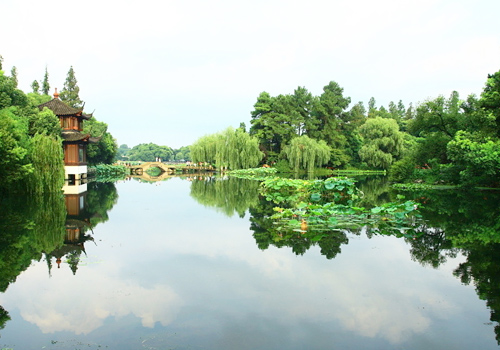 West Lake was firstly so called in Tang Dynasty (618-907), while various versions of legend about the origin of the West Lake are popular among people. The most common one goes that a Jade Dragon and a Gold Phoenix found a piece of white jade on the Immortal Island of the Silver River in the heaven. After their efforts for years, the jade was polished to be a bright pearl that the places its rays of light reached would always evergreen with trees and fragrant with colorful blossom flowers. However, the queen of heaven learnt the news and took the pearl away. During the scrambling, the bright jewel dropped out to the earth and reduced to a lake, soon afterwards, Jade Dragon and Gold Phoenix descended to the earth erecting as two mountains (the Jade Hill and Phoenix Hill) to guard their precious jewel, the West Lake.

What to see in the West Lake scenic area?

As a West Lake-centered scenic spot, West Lake is divided into five parts with one mountain (Gu Hill), two causeways (Su Causeway and Bai Causeway), three islets (Ruangong Dun, Hunxin Pavilion and Xiao Yinzhou), five lakes which divided by the two causeways (Outer Lake, North Inner Lake, West Inner Lake, Yue Lake and South Lake) and the famous Ten Views of West Lake. The beauty of West Lake is not merely can be appreciated in the Spring, but in summer with blooming lotus, in autumn with clear moonlight, and in winter with snow and subtle fragrance of red plum. The fine views are enjoyable no matter in what weather and the best beauty is said in the Su Causeway and Bai Causeway. 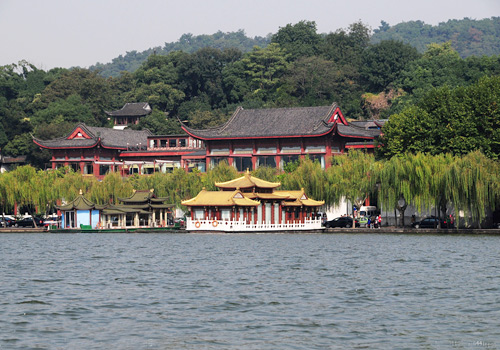 As far back as in Southern Dynasty (1127-1279) when the capital was moved to Hangzhou, the city was flourishing than ever before; it was also the time that the Ten Views of the West Lake became famous. All of ten scenes still can be appreciated today around the lake, representing the quintessence of West Lake. In 1985, another New Ten Views of West Lake was selected by the masses to express their love to the lake; and in 2007, in the Hangzhou West Lake Expo, the latest ten views were picked out. Though people constantly explore new amazing views around West Lake, the classical Ten Scenes recognized for hundreds of years enjoys the best reputation exclusively.

Dawn on the Su Causeway in Spring (苏提春晓)

It is the first to be mentioned in the Ten Scenes of West Lake. Constructed by Su Dongpo in Song Dynasty during his term of office in Hangzhou, the Su Causeway, named after him, goes through the West Lake and abounds in graceful camphor trees as well as other plants. This evergreen long causeway is rather exuberant especially in spring with participated romantic peach blossoms.

The most remarkable view of this area in Yue Lake is the summer lotus. Over 100 species of lotus are planted and small bridges are built connecting the whole scene spot, offering a close observation to the blooming lotus. The stone tablet inscribed with the name of this scene is one of the two remaining tablets given by the Emperor Kangxi (1654-1722) of Qing Dynasty (1636-1911). 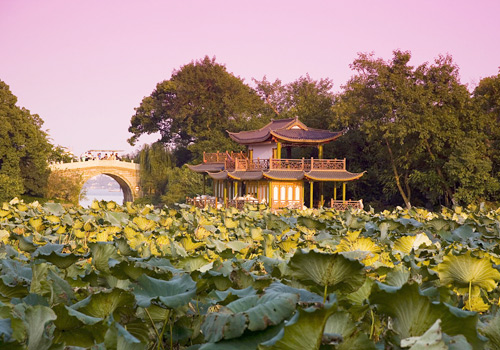 Moon over the Peaceful Lake in Autumn (平湖秋月)

Located in the easternmost of Gu Hill and connects the Bai Causeway, this area is a long and narrow garden along the lake. It is considered the best site of poetic illusions, particularly with the moonlight in autumn. Here is also the place for a full view of the water scenery of West Lake.

Originally a private garden of an official in Southern Song Dynasty, this area is a typical southern style garden with flowers, pavilions, and waters that flow into the West Lake. The kingly tree peony and Chinese herbaceous peony as well as kinds of dynamic fish in the water are the highlights.

Remnant Snow on the Duan Bridge in Winter (断桥残雪)

Duan Bridge is in the end of the Bai Causeway. Win the reputation thanks to the widely known legend of White Snake, the bridge got its name in Tang Dynasty, providing a picturesque view with hill, pagoda, lake, pavilion, bridge and willows. As the only way to Gu Hill, the snow scene of it is more charming in winter.

Leifeng Pagoda in the Sunset (雷峰夕照)

Leifeng Pagoda was built in 977 during Northern Song Dynasty by the King of Wuyue area (present Jiangsu and Zhejiang) to pray for the prosperity for both the country and the people. However, the pagoda is known to people because of the legend of White Snake, who is said to be locked up below the pagoda. As a landmark attraction of West Lake in the past, together with the Baochu Pagoda in the opposite in the north, Leifeng Pagoda offers a unique charming view under the setting sun. 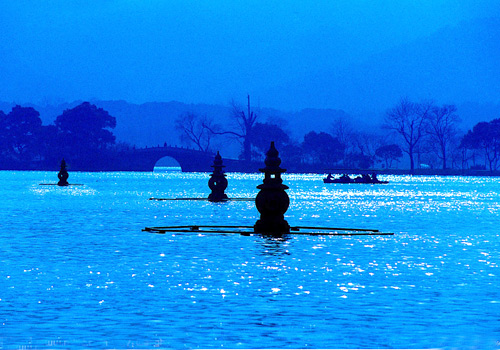 Also called Little Yingzhou, it is the largest islet in West Lake with an area of 60000 square meters. Regarded as the No.1 attraction of West Lake, it is a represent of water garden of south area of Yangtze River. The whole islet is covered with flowers and trees, especially the willow, lotus, red maple and cotton roses, sending fragrance all the year around. The most renowned of Little Yingzhou is three stone pagodas gracefully erecting in the water, providing one of the selective views on the back of Chinese banknotes. It is marvelous that in the night of midautumn, the mirroring moon on the water surface and lights in the pagodas composing a rather extraordinary sight, from which the name “Three Ponds Mirroring the Moon” is derived.

Belongs to Tianmu Mountain, the two highest peaks of the southern hills and northern hills around the West Lake make up a wonderland-like view, which is faintly seen in the clouds.

Nanping Hill is located in the south bank of West Lake. The name of this scene comes from the bells from Jingci Temple located at the foot of Nanping Hill. Usually, bells ring around 16:00 every afternoon.

Orioles Singing in the Willows (柳浪闻莺)

Located in the northeast bank of West Lake, it is a large park with various species of plants and flowers. Originally an imperial garden of Southern Song Dynasty, it is also a preferable site to appreciate the beauty of West Lake with spacious vision. It got its name from rich willows and the resting on singing orioles.