Chinese name: 梅家坞茶村 (Mei Jia Wu Cha Cun)
Location: Meijiawu Village, along the Meiling Road, in the west of the West Lake, Xihu District, Hangzhou City, Zhejiang Province.
Ticket: free.
Opening time: all day long.
How to get there: take buses No.324, 658, 837 or tourist bus No4.

Meijiawu Tea Culture Village, located in the west of the world-known West Lake and hailed as "ten miles Meiwu" for its vast area along the Meiling Road, is an ancient village with a history of 600 years. Inhabited by more than 500 households, Meijiawu Tea Culture Village is picturesque surrounded by mountains and waters; it is a main production base and a protected area of the fragrant West Lake Dragon Well Tea, and a leisure tourist spot featured with tea culture in farm style. It has obtained many a title, such as "A landscaping village in Hangzhou", "Civilization Village", "Patriotic Education Base in Zhejiang Province", "Hangzhou Top ten agricultural demonstrated area", "National agricultural tourism scenic site", and the like. 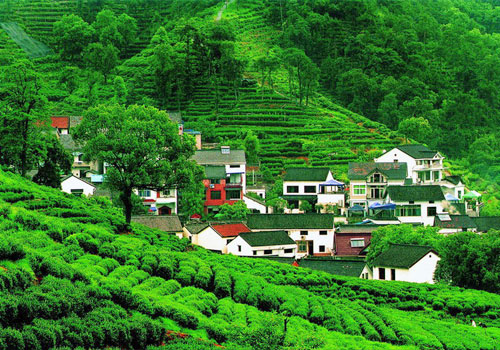 As a renowned Dragon Well Tea production site, the tea leaves from Meijiawu are beautiful in green color, graceful in shape, strong in fragrance and rich in flavor. The village now has over 160 tea houses operated by local families and is equipped with professional reception halls providing multi-language explanations in the history of Meijiawu tea, the picking, stir-frying of tea leaves, and the functions of tea. In addition to this, there are tea art shows; in spring, visitors even can join the locals to pick up fresh tea leaves. The village has received many a head of state and government, such as the ones from Soviet Union, USA, Vietnam, Rumania, Cambodia, etc. and friendly personages around the world. The former Chinese Prime Minister Zhou Enlai once had visited Meijiawu for five times; he showed loving care and gave instructions for the development of the tea production.

Zhou Enlai Memorial Hall
Reformed from the old building which was used to receive Chinese former Prime Minister Zhou Enlai who has paid five visits in Mejiawu for the sake of the development of the local tea industry, the memorial hall was set up based on the donation by locals. Upstairs are reception hall, and downstairs are exhibition halls displaying historical date, pictures and objects regarding to Zhou’s visits, the photos, inscriptions, paintings and calligraphies of other leaders who had visited the village, like vice-chairman Dong Biwu, General Chen Yi, the wife of Zhou Enlai and chairman of CPPCC Deng Yinchao, and so on. 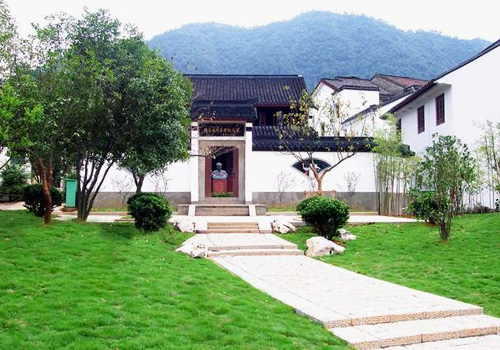 Langdang Hill
Rich in many historical and cultural sites, Langdang Hill in the past is not conveniently to be entered because the entrance is hard to find. With the entrance being expanded with an ancient-style stone archway, visitors now are easily to enjoy the wooded mountain and fine sceneries along the peaceful ancient paths.

Ligeng Hall
The ancient house Ligeng Hall of primitive simplicity is in the style of late Qing Dynasty (1644-1911). The name of the hall Li Geng Tang was inscribed by Zhang Zhao, an official and great calligrapher in 18th century whose inscription also collected in the famous Yueyang Pavilion.

Authentic country-style cuisine
The Dragon-well region is most famous for its amazing landscape and fragrant tea, however, the region boasts some delicious local food. Authentic rice made by burning firewood, fragrant braised pork, moist chicken infused with Dragon-well tea, all food is expertly prepared and delectable in flavor. When one heads to the Dragon-well region it's a certainty that he will sample China's most famous tea, but the local cuisine undoubtedly adds more flavor to the Meijiawu cultural tea-village.

Local food, Dragon-well tea, the terraced tea-gardens and sweet-smelly osmanthus flowers; Meijiawu is really the ideal way to slowly enjoy a day in Hangzhou, sit down with and chat with the locals, or drink perfect cup of Dragon-Well tea and enjoy the tranquil surrounds of this hidden paradise.