Lingyin Temple (Temple of Soul’s Retreat), also called Yunlin Temple, is a famous ancient Buddhist monastery survived for over 1600 years in south regions of the Yangtze River. Seated in Fei Lai Feng Scenic Area in the northwest of West Lake, and hidden between the unique Flying Peak and the Northern Peak of Lingyin Mountain, Ling Yin Temple serves as a quiet and secluded tourist attraction with lavish plants, thick cloud and mist, gorgeous landscape and valuable cultural relics. 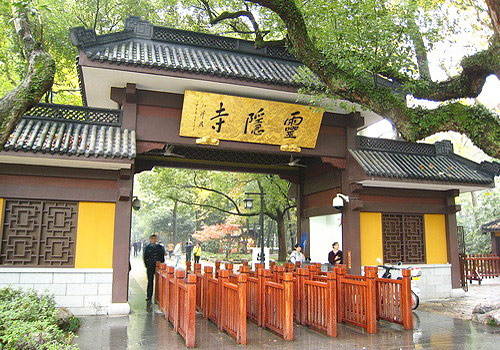 Lingyin Temple of Hangzhou was originally built in 326 in Eastern Jin Dynasty (317-420); it is the earliest temple built in Hangzhou City. According to the story, there was an Indian monk named Huili who visited Hangzhou 1600 years ago, and explored this area which possessed beautiful peaks and could be a secluded site for immortal spirits; hence, he built the temple on the site and named as Ling (means spirits) Yin (seclusion). In the Five Dynasties (907-979), the king of the Wuyue (present Jiangsu and Zhejiang provinces) was a faithful Buddhist who had many temples built in his territory and made a great expansion of the Ling Yin Temple. During the time, Lingyin Temple was inhabited by over 3000 monks in its heyday. In Northern Song Dynasty (960-1127), some celebrities judged all temples in south regions of Yangtze River, and the magnificent Ling Yin Temple was undoubtedly inscribed into the Five Greatest Temples. In Qing Dynasty (1644-1911), when the Emperor Kangxi (1654-1722) visited the temple, he was attracted by the peaceful atmosphere and beautiful landscapes, and could not help making an impromptu inscription, which was still hanging for admiring in the temple today. Since its establishment in 326, the famed Lingyin temple was destroyed and reconstructed for over 10 times, and the present temple was reconstructed in late of Qing Dynasty and has been renovated in 1956 and 1975.

Main Architectures in the Temple

Standing on the central axis are the three main buildings of Ling Yin Temple, namely, the Hall of Heavenly Kings, the Mahavira Hall and the Hall of Medicine Buddha.

- The Hall of Heavenly Kings 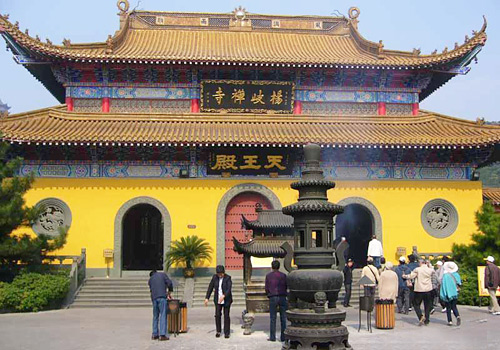 In the central of the hall is a niche for a Maitreya who exposes his belly, sitting on a futon and beaming with smiles. It was made over 200 years ago. The enshrined 2.5-m-high Dharmapala behind the Maitreya was made of camphor trees and it is a typical of Southern Song Dynasty (1127-1279) with great ornamental values. On both sides of the hall are the painted Four Heavenly Kings, all of which are 8 meters high and wear heavy armors. They are commonly referred to as Four Guardians of the Buddha.

Behind the Hall of Heavenly Kings is a courtyard with ancient trees that reach into the skies, and the Mahavira Hall is just behind it. It is the best preserved monolayer multipleeaves temple building in China which is extremely majestic with a height of 33.6 m. In the middle of the hall is a gild Sakyamuni sitting on lotus throne. It is one of the largest wooden sitting Buddhas in the country as well as a precious religious art works with a total height of 24.8 m and is made of 24 pieces of camphor woods. On both sides of the hall are 20 standing heavenly gods, and in the back are the 12 sitting Bodhisattravas; each is true to life but with diverse shapes and expressions. On the back wall of the hall, there are over 150 relievos with great artistic values, vividly portraying some Buddhist stories about Avalokitesvara, and Sakyamuni.

- The Hall of Medicine Buddha

It was built in recent years; the Medicine Buddha, the son of the sun, the son of the moon are enshrined in the hall. In the left of the hall is a reconstructed Arhat Hall, which exhibits about 500 stone Arhats. 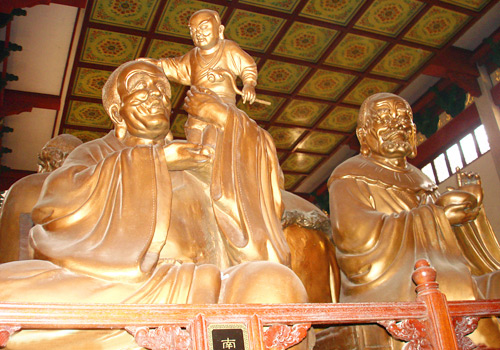 On both sides of the Hall of Heavenly Kings and the Mahavira Hall, there are stone towers built in the Five Dynasties (907-960) and Jingzhuang (Dhvajas) built in 969 in Northern Song Dynasty (960-1127). Other precious Buddhist cultural relics in Lingyin Temple include the oldest sutras some 1400 years ago, ancient pattra leaves sutras, gold-plating statues made in Eastern Wei Dynasty (534-550), religious paintings of past dynasties, the Diamond Sutra wrote by the great calligrapher Dong Qichang of Ming Dynasty (1368-1644), xylographic sutras of Qing Dynasty (1644-1911), etc.