Also called as Lingjiu Feng, the 168-meter-high Fei Lai Feng is a unique limestone peak with marvelous caves, exquisite ancient Buddha statues and kinds of legendary stories. Just rest on the northwest bank of the graceful West Lake, the landscape around Fei Lai Feng Scenic Spots is peerless beautiful and brimming with strong Buddhist atmosphere in virtue of the famous Lingyin Temple in it, ancient trees and steep peaks surrounded, odd caves and stones, as well as great artistic glamour of antiquated Buddhism statues, which are inscribed as important heritage site under state protection since 1982. 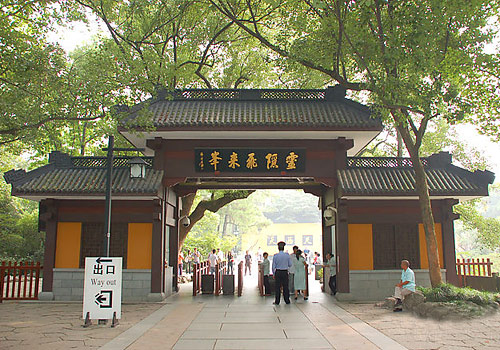 Legend around the Fei Lai Feng- the Flying Peak

Various versions of Fei Lai Feng are widely told among locals, but all are in common on the origin of the name that the Fei Lai Feng is a flying peak from afar just as its Chinese name implies. On the basis of the popular story, it was once a village in the front of Lingyin Temple; one day, a monk in the temple named Jigong got a hint from the Buddha that a huge peak would fly down from far away, which may cover the whole village; hence, Jigong advised villagers to leave away, however, people treated it as a joke and didn’t believe him because he had often played tricks on them; the peak was just about to fly down, desperately, Jigong rush in a wedding and had the bride on his back and run away quickly; people shouted and went out after him; just at the moment, the sky was dark, with a tremendous sound, a peak flied down landed on the front of Lingyin Temple and covered the village; then, people finally learnt that Jigong robbed the bride to save all people’s lives, and the peak was so named as flying peak, the Fei Lai Feng in Chinese.

What to see in Fei Lai Feng Scenic Spot?

Fei Lai Feng is famous for its bizarre shape, odd stones, ancient trees, some peculiar caves and plenty of valuable Buddha statues. It is said that there were about 72 caves and each with a splendid story, while only a few of them can be observed today in the southeast of the peak, and many others have been covered as the time went by.

In Longhong Cave, there is a sitting statue of Avalokitesvara; in the Shenxu Cave in the left, people can see a famous view of a thread of sky through the atop rock tunnels; and in a cave named Cangliu, it is said that the unceasing gurgling sounds of water can be heard clearly. At the west foot of Fei Lai Feng, there is a spring hidden in the deep of great shades, named as Leng Spring; water spring from a bowl-size mouth on the ground is just sparkling and crystal-clear. A famous painter of Ming Dynasty (1368-1644) once praised it in his poems. A Leng Spring Pavilion was just built aside the spring 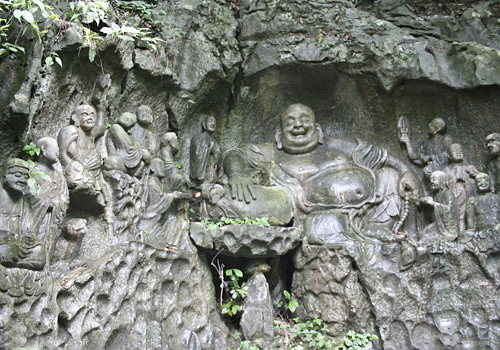 Beside the entrance to Longhong Cave, a pagoda called Lingjiu Pagoda is the only existing pagoda in Hangzhou that was built in Ming Dynasty, which was made by stones with six faces and six storeys; though simple in structure, it is unique in the style and rarely found among ancient pagodas. In the hillside of the flying peak, a small and exquisite Cuiwei Pavilion is set in the midst of green pines and numerous ancient trees. It was built by a great national general Han Shizhong as a lament for the great national hero Yue Fei who lived earlier in the same period as him in Southern Song Dynasty (1127-1279).

Protected under the state, over 470 Buddhist statues in Fei Lai Feng are the most famous historic heritage in the area. Located on caves or cliffs along brooks, these statues were made from the Five Dynasties (907-979) to Song Dynasty (960-1279) and Yuan Dynasty (1206-1368). The three erected Buddhas at the left of the Qinglin Cave is said to be built as early as in 951. Over 200 statues were made in Song Dynasty. The one the big-bellied Maitreya is considered the largest one in the peak and also the earliest bellied Maitreya in China, which offers a rather popular background in visitors’ photos. Most of the Buddha statues in Flying Peak are well preserved and the exquisite skill and graceful appearances of them are clearly appreciated even today.