Introduction to Two Rivers and Four Lakes of Guilin

Two Rivers and Four Lakes of Guilin, the name card of Guilin city, refers to Peach Blossom River (桃花江) and Li River (漓江), Mulong Lake (木龙湖), China Fir Lake (杉湖), Banyan Lake (榕湖), and Osmanthus Lake (桂湖). It is a river system that is on a par with Venice in Italy. It is 7.33 kilometres long, covering an area of 380,000 square metres. First put forward in the year of 1998, the project of Two Rivers and Four Lakes of Guilin was completed on June, 2rd, 2002, making the dream of creating a city surrounded by continuous hills and limpid water come true. 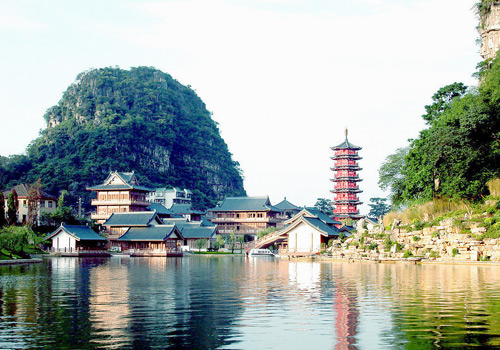 The Two Rivers and Four Lakes scenic area is divided into three areas in accordance with diverse themes, that is China Fir Lake and Banyan Lake scenic area, Mulong Lake scenic area, and Osmanthus Lake scenic area. The resources in the scenic areas are rich in terms of afforestation, architecture, flora, Chinese celebrities' old houses and sculptures. Visitors can always be impressed with the divine grace and profound culture. 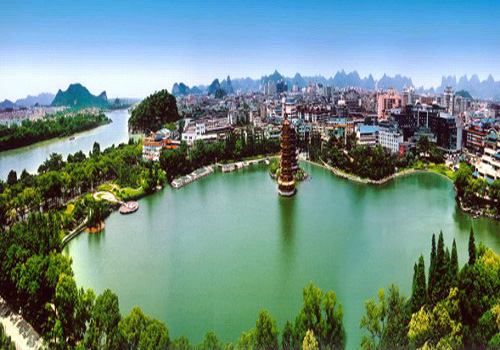 The scenic area is divided into two specific scenic areas. One is Spring Dawn at Banyan Lake (榕湖春晓). Generally speaking, this scenic sport consists of the ancient Banyan tree (古榕树), Ancient South City Gate (古南门), Pavilion of Huang Tingjian Mooring the Boat (黄庭坚系舟处). Close to the ancient banyan tree, Ancient South City Gate of Tang Dynasty (618-907) has its horizontal board inscribed with "古南门" in 1963 by Guo Moruo, a celebrated scholar in China. With respect to Pavilion of Huang Tingjian Mooring the Boat, it was built by the local in honour of Huang Tingjian, a remarkable poet of Song Dynasty (960-1127), who had been touring around Guilin city when he was demoted. In addition, the longest white marble bridge in Guangxi province – Seven Stars Bridge (北斗七星桥) is sited here, too. It is constructed in accordance with the Seven Stars of the Northern Dipper with the white marble-made rails and bridge floor. Seen from afar, it looks exquisite and crystal. 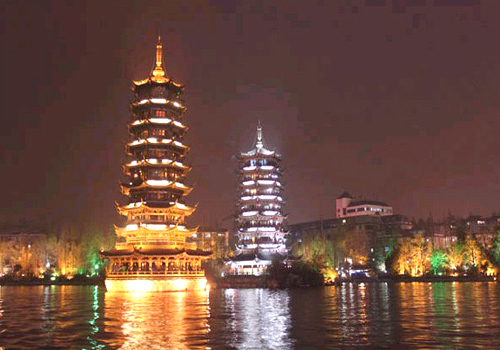 The other is Huxin Island (湖心岛) in the centre of Banyan Lake, which is divided into two parts by the brook. In the midst of the island stand Hunxin Pavilion (湖心亭),  white marble-made dragon boat (汉白玉龙船舫), granite-made arch and many a stone tablet for sightseeing. It is really worth seeing in person! 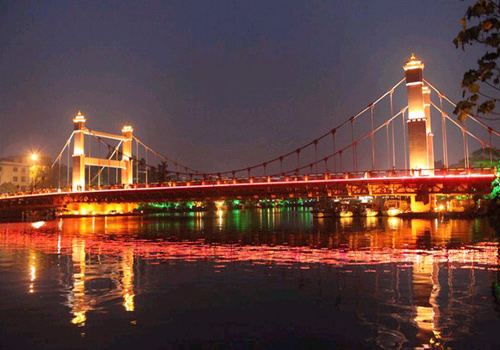 The main attraction of the scenic area is the water outlet of the Peach Blossom River. It features dense trees, rare flora, imposing bridges and pavilions, giving visitors great fun in Mother Nature. Strolling around the lake, you can find Xiqing Lake (西清湖), Baoxian Lake (宝贤湖), Lize Lake (丽泽湖) just before your eyes, as well as artificial waterfall, springs, lovely bridge, plank roads and reliefs. When night falls, you will feel as if you were placed in a gorgeous picture if colourful lights spread every nook and cranny.

Mulong ancient ferry and ancient city wall are major attractions in this scenic area, against Folding Brocade Hill and Baoji Hill, having a strong connotation of the past, the present and the future. 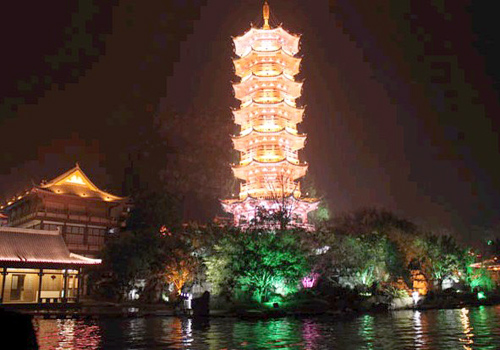 The scenic area is composed of the ancient city wall of Song Dynasty (960-1127), East Gate, Water City Gate, Mulong ancient ferry, and ancient flagging. Visitors can amble around the mock-Song Dynasty shopping street while appreciating Mulong Lake. The locals used Longhua Pagoda in Shanghai as a blueprint to build the 45-metre-high Mulong Pagoda, adding grace to this scenic area.

Lying on the east side of China Fir Lake, next to the Elephant Trunk Hill, Zhiyin Tai covers an area of 10,000 square metres. It is mainly made up of small bridge, island, stream, Pipa-shaped platform.

Standing in the China Fir Lake, the Sun and Moon Pagodas can offer you the panorama of the lake. The nine-tier Sun Pagoda, made of copper, 41 metres tall, is ornamented with exquisite copper murals. This pagoda has set three records – the tallest copper pagoda, the tallest copper construction, the tallest pagoda in the water. Regarding the seven-tier Moon Pagoda it is a glazed tile pagoda, 35 metres tall. Tracing the origin of the stream you can sight of the bronze statue of Wang Zhenggong who once sang the praise of Guilin – "East and west, Guilin scenery is best".

Music fountain is available in Yaoyue platform. Sometimes, if you are lucky enough, you can catch a glimpse of water soaring into sky accompanied by melodious notes. To a large degree, it is symbolic of perfect combination of Guilin water and scenery. 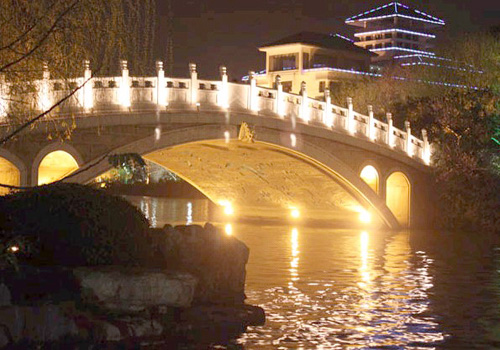 It is located on the North Banyan Lake Road, at the junction of Lize Lake and Banyan Lake. The bridge type follows that of Zhaozhou Bridge, a well-known stone arch bridge in China. Spanning 26 metres long, 8 meters wide, the bridge is simple but rich in history, becoming the fruit of the people’s wisdom.

Sited in the centre of the Banyan Lake, the island is divided into two parts by the brook. In the midst of the island stand Hunxin Pavilion (湖心亭),  white marble-made dragon boat (汉白玉龙船舫), granite-made arch and many a stone tablet for sightseeing. It is really worth seeing you will feel you are living with the immortal in the paradise!

The pavilion in the Huxin Osland, was constructed in the 1940s and renewed twice in 1979. What visitors see today is two novel pavilions connecting by corridor. The bigger one has eight double-eaves in the water, while the smaller one has four single eaves sitting on the bank. This static and dynamic scenic spot can never you bored. 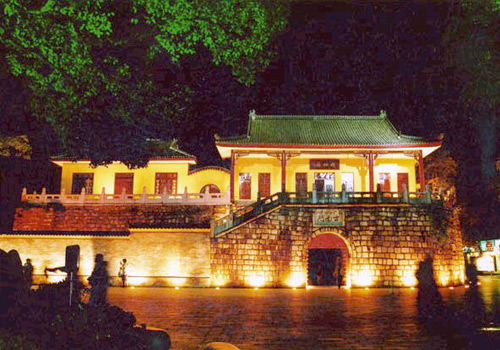 It is inscribed in the list of key national heritage conservation of Guilin city. Located on the north bank of Banyan Lake, the gate has a history of more than 1300 years.

Pavilion of Huang Tingjian Mooring the Boat, it was built by the local in honour of Huang Tingjian, a remarkable poet of Song Dynasty (960-1127), who had been touring around Guilin city when he was demoted.

Guilin has long been renowned for its inscriptions. Along the Banyan Lake, there are thirty seven fine-written articles paying tribute to the wonderful landscape of Guilin. These compositions were engraved on natural rocks by respected contemporary calligraphers of Guilin.

The bridge type follows that of Yudai Bridge in Beijing. They are two parallel bridges. Spanning 30 metres long, 4 metres wide for each, the bridge is even more graceful against the tranquil surroundings.

Standing on the western part of the South Banyan Lake Road, southwest bank of the Banyan Lake, the pavilion was built in the year of 1955. In 1988, it was converted into reinforced concrete architecture which covers an area of 29.7 square metres, 7 metres tall, 5.45 metres long and wide. You can take a rest in the pavilion or lean against the rails to drink in the splendid scenery. 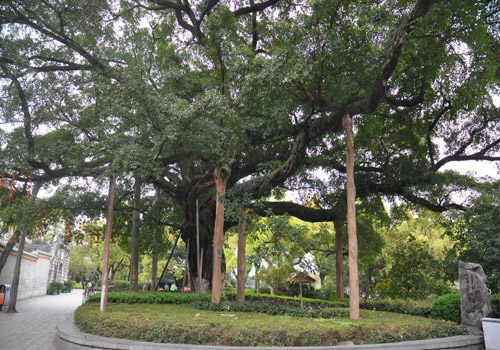 In front of the ancient city wall stands the ancient banyan tree. 18.6 metres tall, the tree falls into Ficus microcarpa with its canopy as big as 32 metres in diameter. According to reliable records, the tree can date back to 800 years ago.

Located in the Banyan Lake, it is the first bridge that has been made of crystal glass in China. Elegant and transparent, the bridge is glittering at night when colourful light spreads.

Tang Jingsong, a founder of Guangxi Opera (桂剧), once built his villa along the Banyan Lake. This attraction consists of the statue of Tang Jingsong himself and a screen wall facing the gate of the house, in which different sorts of characters in the opera are engraved.