Location: On the eastern bank of the Li River, 1.5 kilometers (0.9 miles) away from the downtown area and across the Liberation Bridge, Seven Star Area, Guilin city, Guangxi Zhuang Autonomous Region (aka Guangxi Province).
Opening time: 08:00 to 17:00 everyday, extra admission fees to visit the cave
How to get there: On private coach or by yourself, take buses No. 9,10, 11, 18, 24, 30, 31, 52, 58,204, 206. Please check the stop board for the destination in case that the bus routes change.
Best time to visit: all year long

One of China's most picturesque city parks

Registered as one of the best city parks in China, the Guilin Seven Star Park (Qixing gongyuan, 七星公园) is for sure the attraction that you should do when having some extra time in the city. Most picturesque and visited park of Guilin area, the Seven Star Park is also the largest park of the city for its more than 120 hectares of mountains, clear water, amazing stone forest, calm valleys, animals and plants diversity and valued cultural relics. Tracing back to the Sui (581-618) and Tang (618-907) dynasties, the park has gained even more reputation with years due to its unique natural richness. Praised by former American President Bill Clinton in 1998 during a speech on environmental protection, Seven Star Park is a place where to enjoy diverse attractions such as the Flower Bridge, Seven Star Buddhist Temple, Seven Star Cave, Camel Hill, Guihai Stele Forest, Light of China Square, Guilin Seven Star Zoo, Children's Amusement Park, 3 Generals and 800 Warriors' Tomb, Mosque, Potted Scenery, and Sea of Sweet Osmanthus Trees and Forest of Tablets (桂海碑林Gui Hai Bei Lin, a large collection of sweet osmanthus trees and ancient tablets). A huge natural scenic spot near to the city center of Guilin!

Particularities of the Seven Star Park 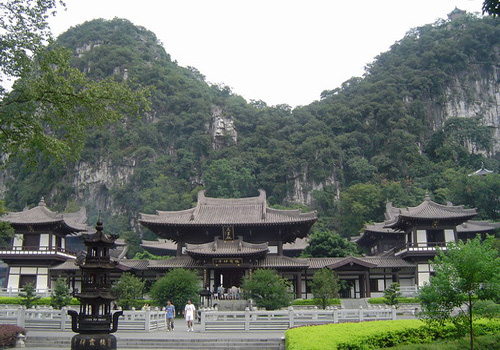 The Seven Star Park's topography is what we can call a curiosity. Indeed, the park got its name from its seven karstic peaks: four from the Putuo Mountain, three from the Crescent Mountain all together representing the seven stars of the Ursa Major constellation ("Great bear" or "Big Dipper" in the USA). This universally known constellation - called "The Plough" in Britain, "The Great Cart" (Grosser Wagen) in Germany, "Karl's Cart" in Scandinavia (i.e. Karlsvognen/Karlsvagnen/Karlsvogna in Denmark, Sweden, Norway), and "The Saucepan" (Steelpannetje) in Nederland - is also known as "The Northern Dipper" (Beidou Qixing) in Eastern Asia. The four peaks of Mount Putuo making the four corners of the Big Dipper's cup, the three of the Crescent Mountain the handle. The many peaks of the park together with the caves, gardens and tourist attractions are major highlights keeping the interest of its visitors for hours.

The Seven Star Park's Putuo Mountain, main body of the park located at its northwest, is the worshipping place of the Avalokitesvara Bodhisattva. The four peaks composing the Mountain are the Tianshu, Tianxuan, Tianji and Tianquan Peaks. This part of the park is abounding with many grottoes (among which are the famous Yuanfeng Cave and Seven Star Cave), pavilions (Xuanwu Pavilion and Zhaixing Pavilion at the top, giving the best city skyline ever). Most important attraction of the park: the Seven Star Cave in the eastern part of Putuo Mountain is where admiring stalactites, stalagmites and stone pillars. By climbing the mountain, the Tomb of the Three Generals and the Tombs of 800 Heroes can be seen. Arrived at the top, the Putuo Stone Forest is waiting for travelers and constitutes a great highlight of the area, where seeing numerous ancient tablets, cultural relics and stone inscriptions (more than 200 indeed).

To the south of Putuo Mountain, the Crescent Mountain called this way due to its obvious crescent-shaped stone geology is also where seeing pavilions (among which the Banyue Pavilion, Guanghan Pavilion are the most famous), caves (Longyin Cave and Rock) and Guihai Stele Forest. Composed of more than 220 tablets concerning general matters such as economy, politics, military affairs, etc… of ancient times. The more than a hundred year history of the place is not without letting its visitors flint every time.

The other curiosity of the Park stands in the area between the two mountains: the Light of China Square. Spreading over 13,520 square meters (16,170 square yards), the square is a place where relaxing near to the two large-scale pieces of artworks: the stone carving murals, made up of more than 100 stone carvings and epitomizing 5000-year of Chinese civilization, and the Shi Ji Bao Ding, a four-legged Ding (4.6 meters (15 feet) height), symbol of a flourishing nation and peaceful living people.

Due to its large extension in Guilin city, the Seven Star Park is where seeing a lot of attractions and highlights making the fame of Guilin city everywhere in the area and country. The listed attractions below are for your reference, making you discover the top things offers to you in Guilin city's park: 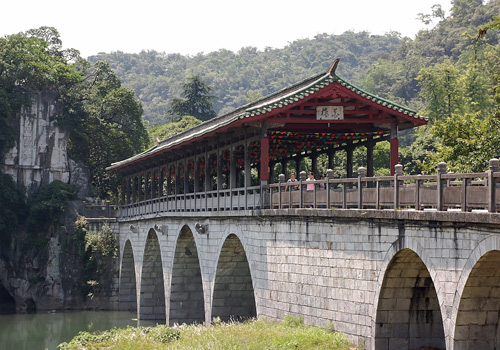 Famous for being Guilin city's oldest bridge, the Flower Bridge is an elegant arched structure built during the Song Dynasty (960-1276) and renovated in 1965. This 135-meter (147.6 yards) long bridge crosses the confluence of the Li River's East Stream (Xiaodongjiang) and the Lingjian Stream all passing through the park. It constitutes the main entrance of the park, directly facing the Liberation Bridge that reaches Guilin downtown. The name of the bridge originates from the ancient flowers surrounding the bridge that used to be in full blossom in late spring to mid-summer time: peach blossom, green bamboo and other wild flowers were there to welcome the visitors. Eventhough this particularity has a bit disappeared today, the bridge has kept its name and is still a curiosity of typical Chinese architecture for its visitors. When crossing the bridge, travelers should have a stop at the main interest of the place that stands in seeing the bridge arch's inverted reflection in the water, drawing like a full moon whatever the level of water is. 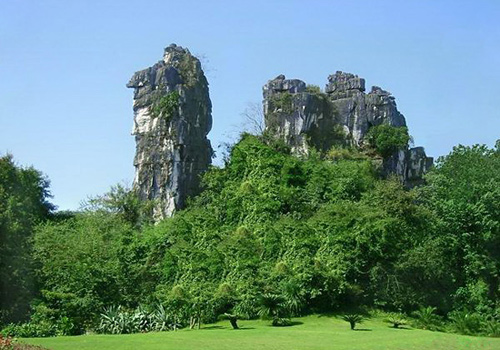 Seven Star Park's Camel Hill is one of the 10 top sceneries of Guilin. Lying at one entrance of the park and located behind Putuo Mountain, the Camel Hill is surrounded by the nearby Park's zoo, bonsai gardens, souvenir shops and teahouses. The rock formation looks indeed strangely like a huge camel standing in vast grassland, where locals and tourists like to have a rest and take memorable pictures. This natural rock formation due to erosion is something common in Guilin area as rocks, hills and peaks there can all remind you either of someone or something (what is also seen on the mountains surrounding the Li River). Famous tourist visit and local resting area, Camel Hill is also famous for being the place where U.S. President Bill Clinton gave a speech in 1998 on the need for environmental protection. In order to remember the event for Guilin area, a big carved stone stands in front of the site. 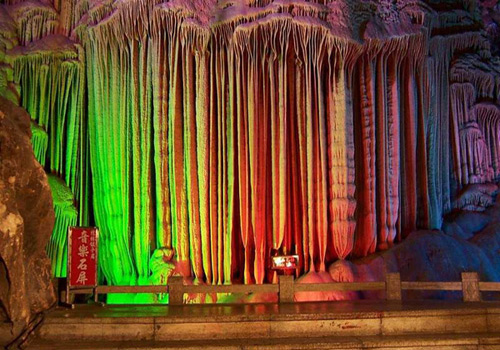 The best highlight of the Park, the Seven Star Cave (called Qixia Cave or Bixu Cave in Chinese) is nestling at the western side of the Putuo Mountain. Referred to as the "Residence of the Immortals" for its huge impressive rock formations, the place is of a great interest since the Sui (581-618) and Tang (618-907) Dynasties. The Seven Star Cave stretches around 1 100 meters, with 50 meters at its widest point and 20 meters at its highest point. This well-known jewel made of natural dissolution of limestone by rain water is where seeing stalagmites, stalactites, stone flowers, stone curtains, stone pillars, etc… A visit dazzling everyone. The colorful lights putting into relief the karstic formations in the cave are giving an impression of being out of the world, like being visiting the belly of a dragon. With its constant 20 degrees, the cave is a relief during summer and a cool breath after visiting the many scenic spots of the park. Poems, inscriptions and other odd shapes are really worth the visit.

Sea of Sweet Osmanthus Trees and Forest of Tablets 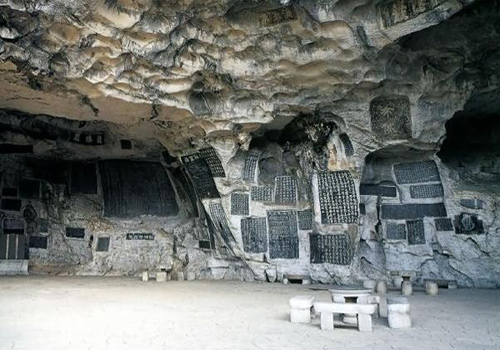 This great curiosity of the Seven Star Park is not without remaining people stony-faced! Guihai Stele Forest is a well-preserved site of 218 upright stone tablets (steles), carvings and inscriptions, lying at the south of the Crescent Mountain. The engravings there feature some of China's earliest calligraphy concerning general matters such as economy, politics, military affairs… tracing back from the Tang (618-907) and Song (960-1279) Dynasties. Of great importance in Chinese calligraphy culture, the site is decidedly worth a visit as ranking second after Xian's Forest of Steles. 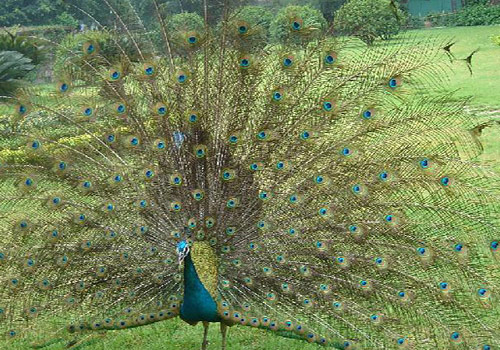 Standing as the only zoo in Guilin city, the Guilin Seven Star Zoo, though looking a little bit different in terms of animal housing conditions to western people, is a great highlight of the park and city where seeing Giant Pandas, red pandas, monkeys, camels, reptiles, sheep and many more. Since its construction in the 1960s, the park has been raising 8 pandas named respectively "No.9", "Weilun", "Meimei", "Taotao", "Yueyue" and "Yangyang", eventhough just 3 can be seen today. In 2008, two more pandas have been offered to the park thanks to the Beijing Olympic Games. "Fengyi" and "Meixin", the seventh and eighth pandas of the Seven Star Park are now the highlight of Guilin vicinity charming everyone one, kids and parents. Pride of the park, panda "Meimei" who lived 36 years had been a world record of longevity among the pandas living in captivity. Other popular area of the zoo, the Wonder Garden will attract your attention for the opportunity of feeding sheep and rabbits.

Guilin Seven Star Park is without any contest a bunch of jewels near to the city center. Present from mother nature, the site is ten times worth a visit, giving to travelers another impression on Guilin's beauty.