When traveling to the Guangxi Province, many diverse attractions are offered to travelers for a unique experience and insight into the history and the culture of the country. As a typical and well preserved traditional Chinese town, Daxu is a jewel of culture and history that is still ranked as an off-the-beaten track sight. Located on the banks of the Li River, a stop at Daxu Ancient Town is an original experience that gives travelers a deeper insight into the life of local people. Ranked as one of the four famous ancient towns in Guangxi province, Daxu has many undiscovered aspects waiting to be discovered.

An ancient town on the bank of the Li River 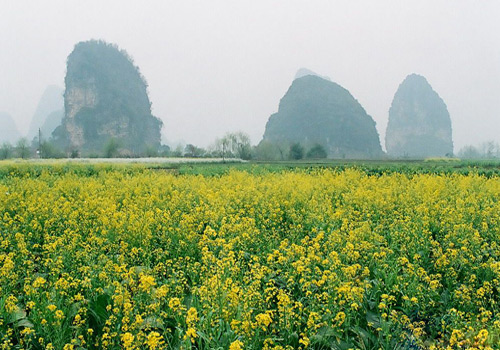 Being a scenic spot becoming more and more popular, Daxu Ancient Town gets most of its fame from the nearby Li River. Indeed, Daxu is located at the southeast of Guilin city (23 km (14.3 miles)), on the northern bank of the Li River. Enjoying beautiful lush scenery for being situated in a humid subtropical climate, Daxu’s ancient buildings and streets contrast sharply with the greenery trees and vegetation surrounding. 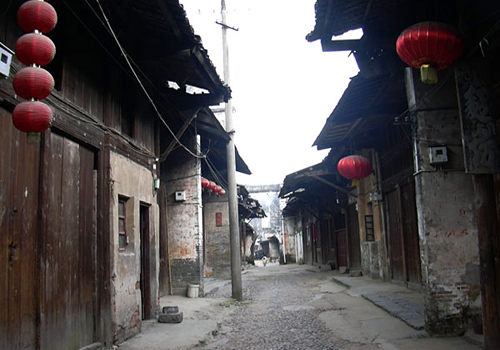 The charming ancient town of Daxu has a history tracing back to more than 1,000 years ago. Originally constituted during the early Northern Song Dynasty (960 – 1126), Daxu is a jewel for ancient buildings and temples. The Gaozu Temple and Hanhuang Temple that travelers can see in the village are namely Qing Dynasty (1644 – 1911) buildings catching the attention of everyone. Historically, Daxu was known as one of the four major harbors bordering the Li River, hence its high number of traders and the importance of its market was famous all over southern China. During Emperor Qin Shi Huang (259 BC – 210 BC) era, the activity of Daxu was speeded up after the construction of the Ling Canal linking the Xiang River of the Yangtze River water system together with the Li River of the Pearl River water system. Testimonies of this glorious age of Daxu Village are the 13 docks lying along the old street becoming now a curiosity to visitors.

Despite the construction of the nearby railway and highways, Daxu has survived from massive tourist exploitation and kept its original nature that charms lovers of ancient buildings. The Daxu traditional market that is still a fame of the area is a jewel transporting everyone into ancient times. 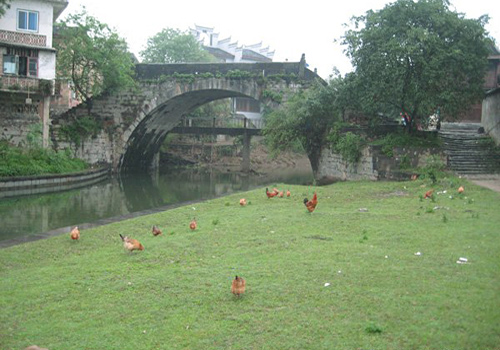 Daxu Ancient Town is a marvel of ancient Chinese architecture tracing back to the Ming (1368 – 1644) and Qing (1644 – 1911) dynasties. The town has the particularity of being home to various ancient wooden and stone buildings, old residences, shops and stalls still remembering the antique style of previous dynasties. A visit to Daxu is the opportunity to walk on the dark green quadrate limestone cobbled streets that have been grounded and washed smooth by shoes, carts and rain for more than 1000 years. Measuring 2.5 kilometers in length and 2 meters in width, the streets stretch through the town like a real testimony of the people that used them before. Mainly composed of ancient houses, Daxu comprises 13 docks that have been built during the Ming and among which five are still well preserved and used everyday. The Ancient Town has been revealed to the world since the shooting of many scenes of the film "Sanjie Liu" that has got a great fame all over China, a reason for some areas of Daxu to be quite popular among Chinese tourists. As an ancient town located in the Guangxi Zhuang Autonomous Region, Daxu is a combination of historical relics and cultural facts, local food and customs. Keeping their traditional handcrafts and business (rice wine, carpenters, bamboo baskets, traditional Chinese medical clinics, etc.), local Daxu people have succeeded in facing modern development and destruction of old buildings for the pleasure of travelers looking for some original spots.

What to see in Daxu Ancient Town today? 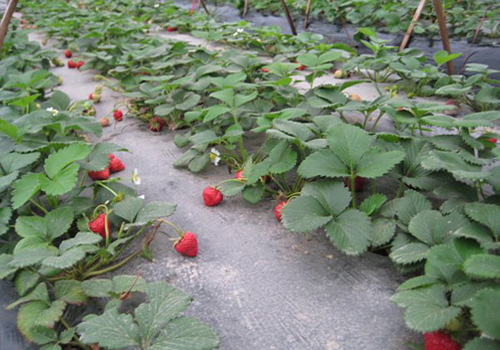 Travelers looking for a visit in Daxu Ancient Town will be charmed by the preserved residences and alleyways. The old stone-paved streets and general atmosphere are indeed the greatest highlights of this town that still lives in another age, far away from the huge city centers and shopping malls. The wooden architecture of Daxu houses and the century-old docks are often the center of a particular interest from amateurs of photography coming from everywhere to see this precious site. Colorful decorations, elegantly carved doors with grannies sitting at their houses’ door looking at the activity of the street and playing with the kids… A visit to Daxu will transport you to another time, far away from the tumult of bigger cities. The Wanshou Bridge (Longevity Bridge) built in the Ming Dynasty is one of the biggest highlights of this ancient town for its single arched stone bridge mingling ancient and natural beauty. Daxu Ancient Town is also the place to tast some typical countryside food like dumping snacks, local delicacies and fruits. Opposite to Daxu just stand Maozhou Island (毛洲岛), the biggest island on the Li River and a marvel for people loving spending some time in nature. There, local farmers will let you pick some fruits and vegetables. A unique experience of gardening in the fabulous nature of China! Daxu is a must-see attraction near to Guilin, a fabulous relaxing time that will never let you down.