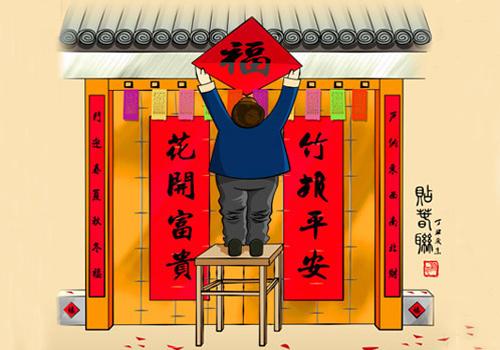 Spring festival has a long historical standing originating from worshipping and sacrificing at the end of a year in Shang Dynasty (1600BC- 1100BC), and formally fixed in the first year of the reign of Emperor Wudi (156BC- 87BC, Chinese:汉武帝) of Han Dynasty (202BC- 220AD). During the Spring Festival, Han people and all ethnic people celebrate with kinds of activities, such as sacrifice the gods, worship ancestors, set off firecrackers and fireworks, lion dance and dragon dance, and kinds of parties.

The preparation work for Spring Festival often starts from Dec. 23 of the lunar calendar, about one week before the festival, and Dec. 23 or 24 is also celebrated in some regions as a small year festival (Chinese:小年) as the Spring Festival Eve is called as a big year festival (Chinese:大年). The general preparations include cleaning the house, doing special purchasing for the festival, decorating with plants and flowers, hanging red lanterns, pasting spring couplets and "Happiness" upside down (the upside down Happiness means the coming of the happiness in Chinese, i.e. 福到了) which are both written on red papers, in most northern areas, also pasting paper-cuts and New Year’s Paintings, preparing food for the feast on Spring Festival Eve, and the like.

Spring Festival is a significant festival for family reunion, and family reunion dinner (Chinese:团圆饭) is the major part on the Spring Festival Eve. On that day, all members of a big family get together to have the dinner, and after, watch the Spring Festival Gala (Chinese:春节联欢晚会) together on CCTV which begins at 20:00 and last for at least 4 hours to welcome the new year; meanwhile, the whole family make the dumplings, which is a must for midnight snack on that day. It is also a custom that all people stay up late or all night on that day, waiting for the New Year’s bell at midnight, known as Shousui (Chinese:守岁). The peak celebration lies in the countdown of the first bell of New Year at the mid night with cheers and endless firecrackers and fireworks.

Though customs in different regions may have slight differences, generally, on the first day of the New Year, people often wear new clothes, congratulate and greet relatives and friends with bows and auspicious words to wish for happiness and good luck; and adults give children the lucky money (Chinese:压岁钱) which is believed to bring happiness and good luck to children. People visit relatives, called as Bai Nian in Chinese (Chinese:拜年) during the whole festival till the lantern Festival on the 15th day; And married daughter visit her parental home usually on the second day of the New Year with her husband and children.