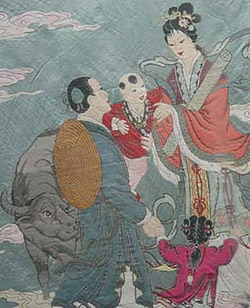 Qiqiao Festival is related to a beautiful love story between Niulang (cowherd) and Zhinv (weaving maid) handed down for thousand of years. According to the legend, a cowherd in the earth and a fairy from the heaven fall in love with each other. After their marriage, the cowherd cultivates and the weaving maid weaves and they live happy with a son and a daughter. However, they are forbidden to marry according to the law of heaven. And their marriage is found finally and they are separated by a river on the heaven by the queen of the heaven. Moved by their love, they are allowed eventually to meet each other once each year at the night of July 7th on the lunar calendar. It is said that at that night, all the magpies in the earth will fly up to the heaven to build a bridge over the river for the cowherd and weaving maid; and people can hear their whispers under the grape trellis or melon trellis.

According to customs, Qiqiao festival celebrated at the night, girls offer their sewing kits as well as fruit and flowers to the Altair and Vega stars, known as Cowherd Star and Weaving Maid Star in China, to pray for intelligence and smart skill in needlework as well as a marital happiness. Today, Qiqiao Festival is celebrated as a romantic valentine’s day in China particularly among young people, that many people express their love to their sweetheart with gifts, chocolates, flowers and romantic dinners.