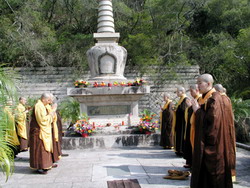 Tomb-sweeping Festival (Chinese:清明节), or Qingming Festival in Chinese, is a festival to worship ancestors and deceased relatives in China usually falls on April 4 or April 5. Tomb-sweeping Festival can be traced back to Eastern Zhou Dynasty (770BC- 256BC), with a history of over 2500 years. According to the tradition, people eat cold food during this festival.

Around Tomb-sweeping Festival, people visit their ancestors’ tombs with food, wine, fruits, joss sticks and zhiqian (Chinese:纸钱, paper made to resemble money and burned as an offering to the dead). Food, wine and fruits are put in the front of the tomb and then the joss sticks and zhiqian are burned. Also, people clean up weeds and sweep away leaves around the tomb to show their filial piety to their ancestors.

Qingming is a festival as well as one of the Chinese 24 solar terms (Chinese:二十四节气), which objectively mirror the alteration of air temperatures, rainfall and biotemperature, and farmers arrange their farming activities accordingly. Qingming is the solar term implies the coming of spring and the increase of rains and temperature. It is a best time for spring ploughing and sowing as well as for spring outing. Therefore, after the festival, farmers are busy with their farming works, and people go out for fresh air and kinds of recreations and sports activities, like ride on the swing, and fly kites.