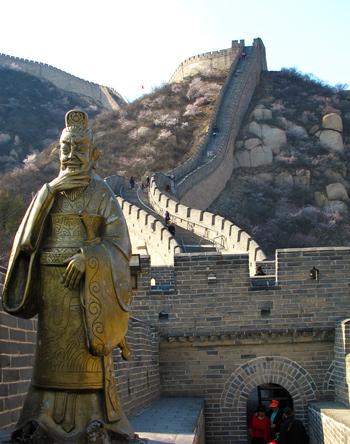 Qin (259 BC – 210 BC)
In 221 BC, Ying Zheng, who was originally a king of Qin Kingdom (one of the seven kingdoms during the Warring States Period), terminated the 250-year-old warring situation and brought China into new epoch. After he unified the country, Qin Dynasty, the first Chinese feudal dynasty, was founded and he gave himself the name of “Qin Shi Huang”, signifying that he is the first emperor of China. Qin Shi Huang’s contribution to the country includes unifying written language, currency, length, capacity and weight; and the system of prefectures and counties and the feudal national system he built were used in the following 2000 years. To strengthen his controlling in thought, Qin Shi Huang strived to carry out Hanfei’s thought of Legalist, burnt books of other schools and buried Confucian scholars alive, which suspended the developing of Confucianism. During his reign, over 300,000 men were organized to construct the 5000-kilometer-long Great Wall in northern China and his mausoleum had been built before his death. It was in this well-covert and grand mausoleum that the world-famous Terracotta Warriors and Horses unearthed, and the 8000 life-size terracotta figurines, horses and chariots are hailed as the Eighth World Wonders!