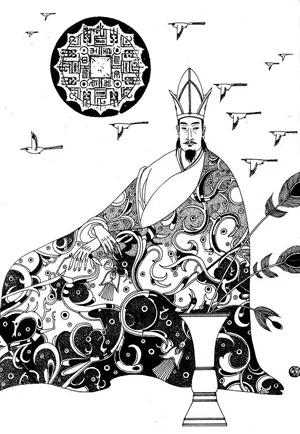 The second dynasty Shang was the first Chinese dynasty with written history, the old oracle bones made in this dynasty have been radiocarbon dated to as early as 1500 BC. And the Simuwu Vessel cast by King Wuding between 1400 BC and 1200 BC is at present the biggest unearthed ancient bronze wares in the world, which is also a reflection of the advantaged casting skills of Shang Dynasty. Moreover, it is also proud of its success in ceramics and silk weaving.

Slave system continued to be developed in following Western Zhou Dynasty. However, the national system commenced to collapse with the declining of the ruling class and the princes’ vying for supremacy. This period is considered as the transitory stage between slave society and feudal society, commonly known as “Spring and Autumn Period & Warring States Period”, during which steel manufacturing emerged and different schools of academic thoughts brisked unprecedentedly. Confucius, Laozi (founder of Taoism), Mencius, Hanfei and Sun Wu (military scientist) are the most outstanding ones who lived in the age and made great contribution to Chinese culture.