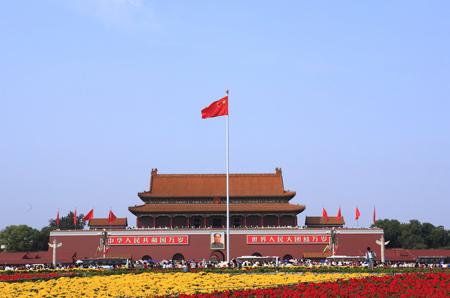 With the founding of People’s Republic of China by Chairman Mao Zedong at the Tiananmen Square on October 1st, 1949, China stepped into a totally new era - communistic society. After the foundation of PRC, the Chinese government successfully undertaken land reform in the country and 0.3 billion peasants who accounted over 90% of the national population of the time obtained fields; the First Five-Year Plan between 1953 and 1957 gained an annual increase over 8.9% in national income; the first manufacturing of basic industries, including airplanes, motors, heavy-duty machines, precise instrument, generating equipments, metallurgy and mining equipment, high-grade alloy steel and non-ferrous metal smelting, etc, were also built.

The period from 1957 to 1966 is the time of large-scale socialist construction of China. Capital construction and technical transformation in both agriculture and industry were undertaken through the country on a large scale. In the Great Cultural Revolution from 1966 to 1976,China encountered the severest frustration and loss since its foundation in 1949. With the downfall of the counterrevolutionary group led by Jiang Qing in October in 1976, the revolution terminated; and then Deng Xiaoping took office renewedly, carrying out the Reform and Open Policy, which puts socialist modernization as centre of gravity of the whole country and established a way of socialist construction with Chinese characteristics step by step. In the mean time, the Chinese government led by Deng Xiaoping also worked hard in regaining lost territories. On December 19th of 1984, the British and Chinese governments signed a joint statement on Hong Kong’s returning to China; and on April 13th of 1987, the Sino-Portuguese joint declaration was signed by the two governments in Beijing, announcing the returning of Macao to China. On July 1st of 1997 and December 20th of 1999, the government of People’s Public of China resumes the exercise of sovereignty over Hong Kong and Macao respectively. Due to the existing economic, legal and social systems forming during their colonial time, the two cities were set as special administrative regions, carrying out the policy of "One Country, Two Systems (socialist system in mainland China & capitalist system in Hong Kong and Macao)" propounded by Deng Xiaoping, enjoying high degree of autonomy except defense and foreign affairs.

In 1989, Jiang Zemin was selected as the General Secretary of the CPC Central Committee and held the position as the state president of China in 1993, leading the third generation of state leaders of China, carrying on the Reform and Open Policy. During 1990s, China entered an era of fast growing in economy and being active in foreign affairs.

In 2012, Xi Jinping was selected as the General Secretary of the CPC Central Committee, and he was then selected as the President of the People's Republic of China in 2013. As the leader of China's fifth generation of leadership, Xi has initiated an unprecedented and far-reaching campaign against corruption; meanwhile, the fifth generation of leadership put an emphasis on individual and national aspirations under the neologism "Chinese Dream".