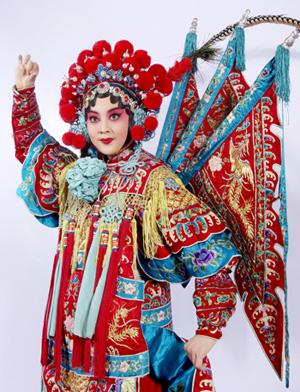 Beijing Opera, known as Peking Opera, is the largest and regarded as the national opera in China with a history of 200 years. Peking Opera also called Daxi (Chinese:大戏, or big drama) in China as other local operas are called Xiaoxi (Chinese:小戏, or small dramas), and it was developed to present form in Beijing in Qing Dynasty (1636-1911).

To celebrate the eightieth birthday of Emperor Qianlong (1735-1795), excellent troupes of numerous local operas over the country were invited to perform for him in Beijing. And later the top four troupes from Anhui Province were asked to remain. Absorbed elements from Kunqu Opera, Shaanxi Opera, and adapted to the local language and perform style in Beijing, the Anhui troupes and Hubei troupes performed together in a stage that gradually produced a new genre, the Peking Opera, which was later became the greatest and most popular opera in the country with its beautiful melodies, magnificent costumes, brilliant performance and interesting facial make up patterns.

Peking Opera is strict in regulations, singing, dialogue, acting and acrobatic combat are the four basic skills, and each of a behavior has a set of procedural actions. Generally, there are four terms of different types of roles, namely, Sheng (male), Dan (female), Jing and Chou, and each can be subdivided to detailed roles, for example, Sheng includes Lao Sheng (old man with long beards), Xiao Sheng (young man), Wen Sheng (scholar or official) and Wu Sheng (martial official). It is interesting that the female roles Dan are usually performed by males. The most famous actor of Peking Opera Mei Lanfang (Chinese:梅兰芳) was expert in Dan roles; He is a great artist who had made significant contributions to Peking Opera and enjoyed a high reputation home and abroad.

There are about 1000 traditional plays in Peking Opera; and three to four hundreds are frequently performed, including some classical plays adapted from other local operas. And the popular subjects are historical stories about politics and military. Peking Opera is accompanied by a series of traditional Chinese instruments, Jinghu (Chinese:京胡, a two-string bowed instrument with high register), Yueqin (Chinese:月琴, a four-stringed plucked instrument with a full-moon-shaped sound box) and Suona (Chinese:唢呐, or suona horn, a woodwind instrument) are the main, gongs and drums of different sizes are the percussion instruments, and castanets(Chinese:响板) is a time-beater which is very important in Peking Opera to beat the time for actors.

The featured facial make ups in diverse color and magnificent costumes are the two most characteristics of Peking Opera. From the color of make up and the style of dressing, audiences can easily recognize the role and the disposition of the character. As for make ups, simply, red represents for righteousness, loyalty and bravery, black for the boldness and rudeness, blue and green for greenwood heroes, yellow and white for cunning and dishonesty, etc. The style of costumes is based on Ming style of both court and civil people. Contrasting colors are matched frequently in deep red, deep green, white, black, yellow and blue, and many embroideries were done with gold, silver and colored threads. Respective styles are also designed for kinds of roles in different ages, statues and occupations.