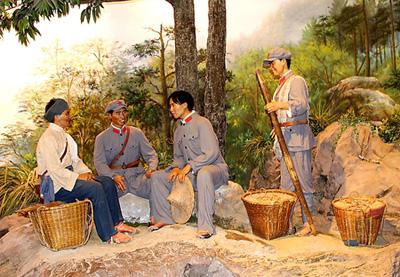 New-democratic Revolution Period (1919 – 1949)
Series of unequal clauses imposed by the imperialist powers aroused the intense patriotism of students and other stratums of China. The May Fourth Movement took place under such circumstance. It is treated as the thought fountainhead of many important events in modern Chinese history, including the spreading of the western modern thoughts and the Marxism-Leninism in China. In 1921, a communist group comprising Mao Zedong and other 11 representatives from various regions of China held the First National Congress in Shanghai, and the Communist Party of China was founded.

China had undergone the Northern Expedition (1924-1927), the Agrarian Revolutionary War (1927-1937), the Anti-Japanese War (1937-1945) and the War of Liberation (Civil War, 1945-1949) in the course of New-democratic Revolution. In the time of Anti-Japanese War, Kuomintang and Communist Party of China cooperated jointly to fight against the fascist Japanese power, while the Kuomintang started the civil war in 1945, at the end of which the Communist Party of China triumphed and founded the People’s Republic of China in Beijing.